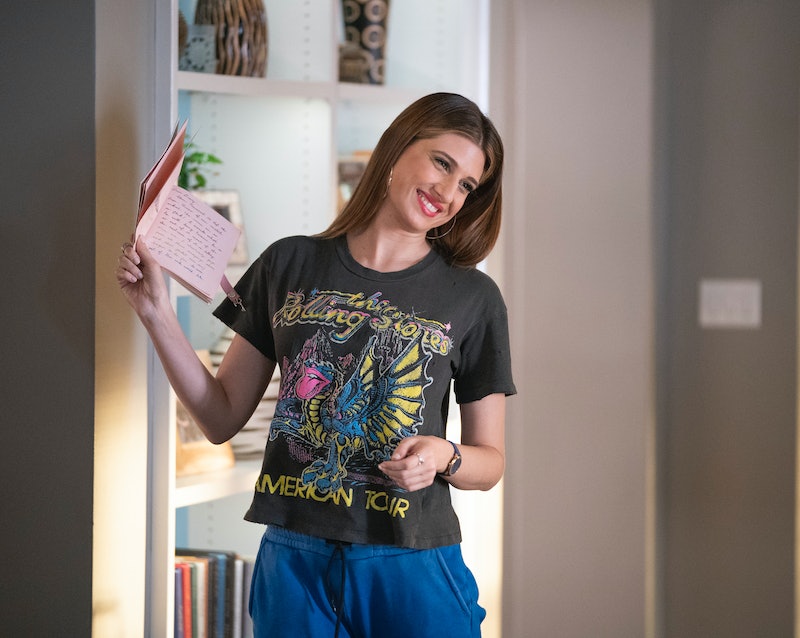 As Selena Gomez has reminded us, the heart wants what it wants. This is an important point to keep in mind when pondering Nomi's relationship with Professor Hewson's on grown-ish as well — especially given the polarizing effect the romance had in the Freeform series' July 3 episode, titled, "Self Care."

Up until the Cal U sophomores decided to take a much-needed "girls' self-care retreat" at the Johnson family home, only Zoey was aware of the controversial coupling. (And even she found out by accident, after spotting the women kissing during her brief stint as a pink-wig-wearing model in a glass box.) Perhaps the fact that Nomi had previously kept their love on the low points to her possibly viewing the relationship as "wrong," or at least understanding why someone else might see it that way. After all, in the previous episode, she and Professor Hewson, aka "Paige," had to concoct a story about the nature of a visit that interrupted a gathering of some faculty members.

Since it's pretty common to gush to friends about an exciting new romance — and Nomi hadn't done that at all — she's clearly aware of some need or reason to keep the relationship a secret. And secrets can sometimes equal shame, right? During the course of Nomi's conversation with Zoey, Ana, Jazz, and Sky, she revealed that Professor Hewson was the one who asked her not to say anything "because people are narrow-minded."

Some, more than others, apparently... Sky was the first to bring up an explanation that's been portrayed in pop culture for decades: Nomi must be sleeping with the teacher to get an A in her class. Is it out of the question for some people? No. But what her assessment does is trivialize a relationship that, at least based upon what viewers have seen and heard so far, is pretty legit.

"Paige is amazing, OK? And we have a real connection," Nomi shared with her friends in the episode. "She's smart and she's interesting and she's given me so much great life advice. I mean, she is the reason that I was honest and finally came out to my parents." Add all of that to the pro column.

Plus, as Nomi also explained, they "didn't even start dating until the semester was over...ish."

While a relationship between consenting adults is fully legal, it is also worth noting that several universities have banned sexual relationships between professors and undergrads. The reasoning speaks to power dynamics and the potential for exploitation, conflict of interest, and/or bias. Jazz honed right in on that, further wondering "how wrong it would feel if she was a 40-year-old male professor."

Ana came in on the other side of the debate, fully supporting the respectful, consensual relationship. "A lot of things would be different if the genders were reversed," she argued. And as for the age difference? "So what? It worked out for Sarah Paulson and whatever old lady she's dating," she said. (Apologies to Holland Taylor.)

Jazz and Sky's blunt opinions were that ones that Nomi (lamenting she'd made a "big mistake" in revealing her relationship status) said were "harsher than Paige even predicted" they would be, however.

Meanwhile, Zoey did a 180 from her previous protest, and took a much more supportive tact. Her take? "I think that Nomi is an amazing human being and I honestly trust whatever she chooses is right for her. And that's Professor Hewson," she summed up. Agreeing to disagree, Jazz and Sky ultimately offered their prayers in lieu of acceptance.

At the end of the day, whether Nomi and Professor Hewson's relationship is right or wrong remains subjective. While there will undoubtedly be much more debating to come, Nomi was at least able to comically take comfort in the fact that the "heat about inappropriate relationships" eventually came off of her, courtesy of Junior and Sky's joint bath time. And how about that mini fashion show?

Here's hoping that Nom will have more lighthearted moments ahead like those — and that her girls will have her back in whatever she decides is best for her.