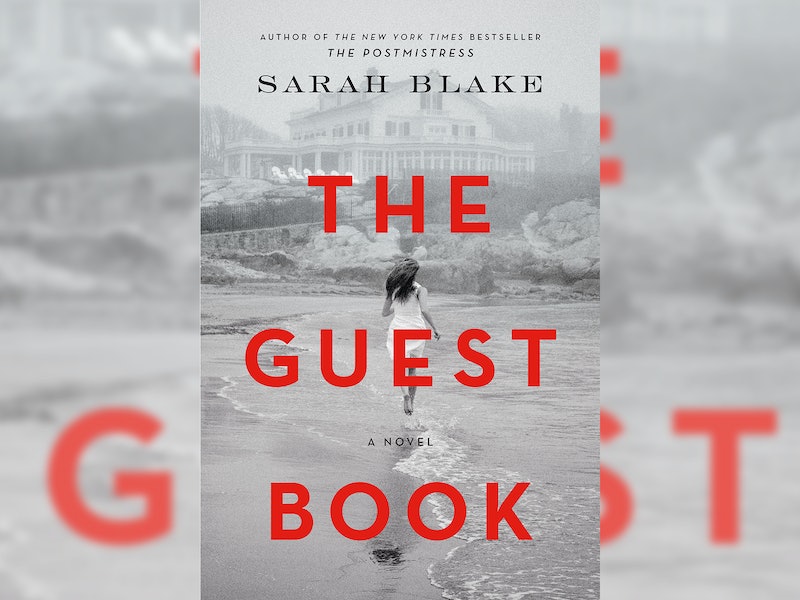 I've got something fans of The Postmistress will love: Author Sarah Blake has a new book coming out in 2019, and Bustle is pleased to reveal its cover and an exclusive excerpt. The Guest Book will hit stores on May 7, 2019, but you can start reading it here today.

If you're in the mood to read a new family saga, you're in luck. Blake's first novel in nearly a decade, The Guest Book is a family drama that fans of The Postmistress will love. The story here centers on the Milton family, beginning with Kitty and Ogden, who purchase an island in Maine after tragedy shakes their marriage to its foundations. From 1935, their island home offers the Miltons a refuge until the 21st century, when Kitty and Ogden's grandchildren can no longer afford to keep it. Spanning three generations of Miltons, The Guest Book deserves a spot on your summer TBR in 2019.

Check out the haunting cover of Sarah Blake's upcoming novel, The Guest Book, below, and keep scrolling to read an exclusive excerpt from the first chapter. The Guest Book is available for pre-order today.

The Guest Book by Sarah Blake, $28, Amazon or Indiebound (Pre-order)

The fall had turned to winter and then back again without conviction, November’s chill taken up and dropped like a woman never wearing the right coat until finally December laughed and took hold. Then the ice on the black pathways through the park fixed an unreflecting gaze upward month after month, the cold unwavering through what should have been spring, what should have been warming, so that even in April, in the Bowery in New York City, the braziers still glowed on street corners, and a man trying to warm his hands could watch the firelight picked up and carried in the windows above his head and imagine the glow traveling all the way along the avenues, square by square above the streets, all the way uptown and into the warm apartments of those who, pausing on the threshold to turn off the light, left their rooms and descended in woolens and furs, grumbling about the cold — good god, when will it end? — until it turned without fanfare one morning in May, and spring let loose at last. All over the city, children were released from their winter coats and out into the greening arms of Central Park. So here we all are again, thought Kitty Milton, stepping into the taxicab on the way to meet her mother at the Philharmonic.

She wore a soft cloche hat that belled below her ears, casting her eyes into shadow and making more pronounced the soft white of her chin tipped forward a little upon her long neck. Her coat swung easily around her knees, her upright figure swathed in a foamy green silk dress, the woolen coat just a shade darker.

All over the city, children were released from their winter coats and out into the greening arms of Central Park. So here we all are again, thought Kitty Milton, stepping into the taxicab on the way to meet her mother at the Philharmonic.

The taxi pulled away from the curb toward Central Park, and through the window spring unfurled above her head in the elm trees, and down along the walkways the forsythia shouted its yellow news. She leaned her head upon the leather.

Life is wide, girls, Miss Scrivener had bid them all, years ago. Cross it with your arms open. And standing before the schoolgirls ranged in rows, all six feet of her—an old maid, her fiancé killed in the Great War—their teacher had thrown out her arms.

And Kitty hadn’t known whether to laugh or cry.

Well, wide it was, Kitty thought now, spring begun and nothing ahead but possibility. Ogden would be home soon from abroad; the ground had been broken on their house in Oyster Bay. She was thirty. It was ’35. Neddy was five, Moss was three, and baby Joan had just turned one. Her head filled with the delicious math of life—the word flushed up onto her cheeks and into her eyes, broadening into a smile as the taxi moved up Fifth Avenue.

She caught the driver’s eye in the mirror and knew she ought to turn her head away so he didn’t see her, smiling like an idiot, but she held his gaze instead. He winked. She smiled back and slid down on the seat, closing her eyes as the taxi plunged into the tunnel moving east to west, underneath the playgrounds in the park where her children were playing with a concentrated fury against the end of the morning, the arrival of lunchtime, crawling around the great bronze statue of a beloved Scottish poet, perching like little sparrows on the giant knee, climbing (if they were lucky, if their nurse wasn’t watching) all the way up to his massive sloping shoulder.

Well, wide it was, Kitty thought now, spring begun and nothing ahead but possibility.

Moss, the younger, who did not like when grown-ups looked at him with that distant, frowning attention that signaled more attention coming after, coming closer, slid off the statue, too quickly, and landed on one bare knee. “Ow,” he mouthed, and lowered his cheek to the hot, scuffed skin. “Ouch.”

But his brother had paid no attention to Nurse below him, their baby sister, Joan, on her big hip; Neddy kept climbing, creeping to the top of the statue’s head, and was—what was he doing?

“Edward.” Nurse moved quickly forward. “Edward! Get down. This instant.”

The boy was going to fall.

He had planted both feet, one on either side of the great head, the shaggy bronze hair covering the two ears, a foot on either shoulder, and was carefully, slowly, pushing himself up to stand, aloft.

The boy was going to break his neck.

The other children stopped their crawling, frozen where they were on the statue, watching the boy above them who had climbed so high. Now he was the only thing moving upon the bronze.

Slowly, carefully, Neddy raised himself, pushing off the poet’s head, wavering just an instant, then catching steady, and stood all the way up. Steady and up so high. Compact, perfect, he stood on the statue’s shoulders, a small being in short pants and a cardigan, now regarding the world of upturned, worried faces below him.

And Moss tilted his head and saw up through the folds of the statue’s jacket, the great thick hands, up past another boy clinging to the open page of that enormous book, Neddy far above, standing, grinning, and crowing.

If he’d held out his hand and said Come, fly! Moss would have flown. For when your brother calls come, you step forward, you take his hand and go. How can you not? It was always him in the front, going first.

His head tipped, his cheek still on his knee, Moss grinned up at his brother.

Neddy nodded and lightly, easily, bent again and slid from the top of the bronze lump, clambering all the way down, arriving with a little bounce as he dropped to the pebbled ground.

“Your father,” Nurse promised, “will hear of this. This is going on the list.”

She unlocked the brake on the pram and pushed the boy’s shoulder roughly. “The list, Edward. You hear me?”

Moss stole his hand into his brother’s. Both boys kept step, ahead of the pram, their little backs straight as soldiers. Smiling.

There would be no list, they knew. It was only Mother at home. Father was in Berlin.

Indeed, Ogden Milton had just turned off the busy Tiergartenstrasse, thick with its double-decker buses and the determined low-slung black Mercedes, entering the wooded park at the center of the city and onto Bellevue Allee which stretched through the Tiergarten in a quiet and solemn line to the spot where he was bound. Almost immediately, the city vanished behind him. He walked beneath the thick alley of lindens in bloom overhead, gathering him immediately in that scent he had tried but never managed to describe to Kitty. Through the black trees along his left, one of the park’s vast meadows rolled all its green way to a distant, flashing lake. And everywhere out in the sunlight and air, in pairs and groups, on bicycles, or on foot, there were Berliners turning their faces toward the long lovely end of the day, as they had done since the time of the kaisers.

Almost immediately, the city vanished behind him. He walked beneath the thick alley of lindens in bloom overhead, gathering him immediately in that scent he had tried but never managed to describe to Kitty.

With the easy grace of a man whose winning stroke was a sweeping crosscut from the back court, Milton made his way through the park, his lineage hanging lightly on his well-formed limbs, the habit of knowing just what to do in any given moment having been passed down from generation to generation. Descended as he was from one of the families to arrive just after the Mayflower (Aristocrats, Ogden, not refugees, as his mother, Harriet, once corrected him), Ogden had been raised with every advantage and told so. There had been a Milton in the first class of Harvard College in 1642 and a Milton in every subsequent class for which there was a young man to offer. A Milton Library was tucked under the wings of the Widener.

With his open American face, his frank American voice, one might think to oneself, seeing him, There walks a good man. A noble man. He appeared dashing and splendid. Undismayed by the ordinary evil of the world, he had the place and the power to make good, to do good. And he did so. He believed one could do right. He had been raised to expect that one could. His was the last generation for whom those givens remained as undisturbed as a silk purse.

The third in a line of Miltons at the helm of Milton Higginson, a bank begun in 1850 that sat squarely at the center of the fortunes of his country and now, increasingly, of Germany’s, this Ogden Milton had taken over the firm quite young, steering at first cautiously, then more and more easily before the wind into the broad, lucrative waters of the 1920s, advancing into Europe with the schoolboy’s grin that would never leave him even as an old man, an infectious grin that seemed to say Isn’t this marvelous. Isn’t this something. Meaning, life. Meaning, luck. Meaning, his world.

From The Guest Book by Sarah Blake. Copyright (c) 2019 by the author and reprinted by permission of Flatiron Books.​