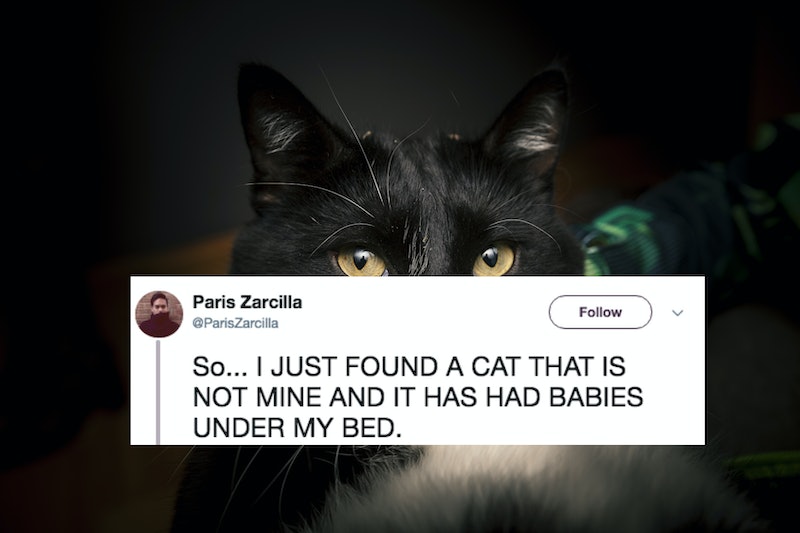 If you look under my bed and find a couple of cats lurking around down there, it’s never a surprise; I have two of them, after all, and the dark, shadowy spot beneath the bed is one of their favorite places to hide. When Paris Zarcilla found a cat and four kittens under his bed today, however? Well, he wasn’t exactly expecting it… because the cat was not his. He had never seen it before, and yet he suddenly found himself in the position of Brand New Cat Dad with a whole family to take care of — so naturally, he started tweeting about it. The resulting the thread is altogether too precious, so, come. Bask in the glory. It will get your day off to the utterly adorable start it deserves.

It all started when Zarcilla, a filmmaker based in London, went upstairs to grab a sweater. (In case you missed it, London is dealing with ludicrous amounts of chilly spring rain right now. More than usual, I mean — according to the Evening Standard, a month’s worth of rain fell in about one hour the other day.) However, what Zarcilla found wasn’t just, y’know, his sweater collection. What he found was an adult tuxedo cat accompanied by four tiny, very recently born kittens, all cozily curled up together under his bed.

His reaction was… understandable:

Indeed, this shocking, yet not unpleasant surprise prompted Zarcilla to ask the obvious question: “Am I dad now?” The answer appears to be yes — and he’s risen to the occasion magnificently, quickly embracing his new role:

And periodically updating his followers with new frontiers in cuteness:

I don’t know about you, but this is me right now:

For the curious, Zarcilla said later on in the thread that he thinks the cat might belong to a neighbor. “I leave my back door open a lot,” he wrote in response to a Twitter user who asked him where the cat came from and how it got into his room. “Slept in my living room last night. Went upstairs to grab a jumper. Boom. Kittens. I am genuinely baffled.”

That a cat might choose the space beneath a bed to give birth isn’t surprising; as Purina UK notes, cat moms-to-be often like to “sneak away to give birth in private.” Dark, warm, quiet spaces are ideal — and the area underneath Zarcilla’s bed could certainly have fit the bill. Indeed, if Zarcilla's back door is frequently left open, the cat could have wandered in at some point earlier, taken note of the under-the-bed space as a potentially fantastic place to give birth, and then come back to have the kittens later on — a stage of cat pregnancy and labor known as “nesting,” according to The Spruce Pets.

In any event, Zarcilla also noted that he’s planning to get the mother cat scanned to see if he can figure out who she actually belongs to — even though he’s also, he said, “so ready to be a dad right now.”

What’s more, the filmmaker also brought up this poignant, extremely valuable thought about the whole situation:

It’s true: Pets really are beneficial to our health. According to research, they can help reduce our anxiety, make us feel safe, and improve our mood — and what’s more, a recently published study in the journal BMC Psychiatry found that pets can specifically benefit our mental health by helping us manage our emotions, as well as distracting us from stressful experiences. It looks like this furry little surprise couldn’t have come at a better time for Zarcilla — and the cats get someone to care for them, too. Everybody wins!

You can read the full thread (including ongoing updates!) over at Zarcilla’s Twitter page — and check out his creative work while you’re at it, too. His short film, Pommel, which was funded by the British Film Institute and the non-profit organization Creative England, is currently on the festival circuit; over the past month, it’s won both the Special Jury Prize for Excellence in Directing at the Los Angeles Asian Pacific Film Festival and the award for Best UK Short at the East End Film Festival. Watch the trailer for Pommel — and a bunch of Zarcilla's other work — over at his Vimeo page.

Now if you’ll excuse me, I’m going to go snuggle my cats now.