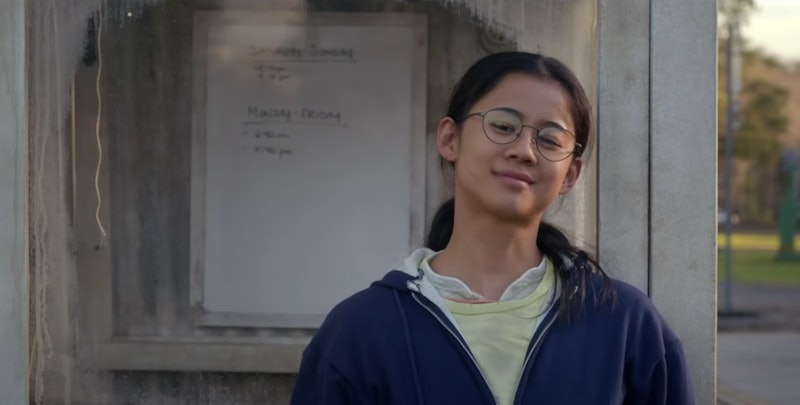 When Netflix released the trailer for The Half of It, the internet responded with full-fledged excitement for the fresh, sweet romantic comedy. What's particularly interesting about The Half of It is that it's based on the classic play Cyrano de Bergerac, but packs a modern twist: queer romance.

In The Half of It, a socially awkward but smart and enterprising high schooler by the name of Ellie Chu (Leah Lewis) sets out to sell her services, doing her classmates' homework for cash. One classmate, a jock by the name of Paul Munsky (Daniel Diemer), befriends Ellie, eventually asking her for help with a different kind of assignment: writing a letter to his crush, Aster Flores (Alexxis Lemire). She does, but in the process of writing letters as Paul, Ellie also begins developing her own crush on Aster, forcing her to reckon with not just her own feelings but the fact that her friend is interested in the same person.

It's a heck of a dramatic development, one that's pulled almost directly from Edmond Rostand's 1897 play, Cyrano de Bergerac. The story beats are very similar: Cyrano is a cadet in the French army, and has many incredible gifts, not the least of which being his skill as a poet and musician. However, Cyrano is often drowned with self-doubt, as a result of his large nose, which makes him self-conscious. It's this self-consciousness that prevents Cyrano from pursuing his love interest, Roxane.

Christian de Neuvillette, a fellow cadet, eventually comes to share his own love for Roxane with Cyrano, turning to him for help in expressing his love. Cyrano offers a letter he had composed himself for Roxane, telling Christian to say he had written it himself.

Some hijinks ensue as Christian attempts to win Roxane's love without Cyrano's help. He fails, spectacularly, sending Roxane up to her home in confused anger. In a famous scene, Christian calls up to Roxane, repeating words Cyrano whispers to him from nearby. Eventually, in frustration over how poorly it goes, Cyrano simply speaks out loud for Christian, who mouths along to what Cyrano is saying. As a result, Christian earns a kiss from Roxane, and the two fall in love and wed.

Later, in the midst of a battle, Christian talks Cyrano into confessing his love for Roxane. However, before he can, Christian is shot and fatally wounded, leaving Roxane a widow. Cyrano then opts instead to preserve Christian's memory — even denying he had written anything for Christian — all the way up to his dying day.

The Half of It deals with some similar themes: self-doubt, unrequited love, and, most importantly to director Alice Wu, the power of finding a soulmate not in a lover, but a friend.