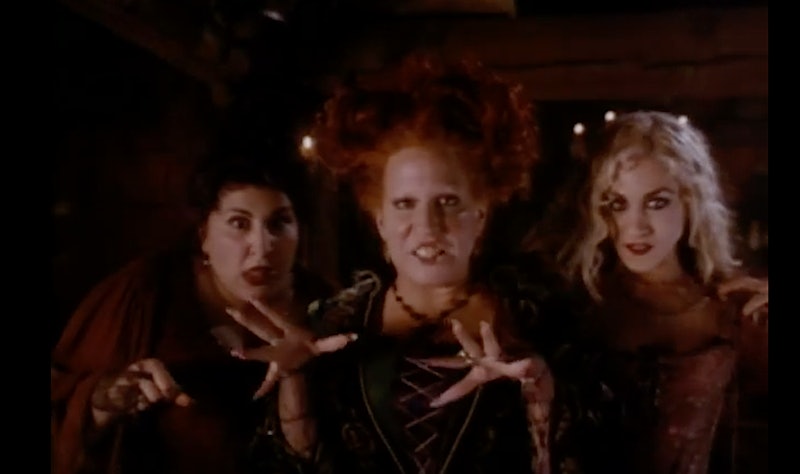 Do you feel that chill in the air? That means that autumn is just around the corner, and with it comes all the festive Halloween vibes. If you're a fan of nostalgic, spooky films, then you know that even though it's early in the fall season, it's never too early to re-watch Hocus Pocus. Ask any millennial and they'll tell you that Hocus Pocus is a near-perfect film that is bursting at the seams with it's huge nostalgia factor. Between all the bonkers '90s references and the terrific cast, it's really a wonder we're not watching this movie all year round.

Every inch of Hocus Pocus is meant for Halloween lovers. Whether it's seeing the beautiful autumn foliage as Max rides home from school to his new home in Salem, feeling a stir of excitement as he lights the black flame candle, or watching Allison and Dani protect themselves and fight off the evil Sanderson sisters in the local graveyard, Hocus Pocus is the perfect film to get you in the Halloween spirit.

1. Because Thackery Binks, Whether A Human Or A Cat, Is Amazing

Thackery Binks is a straight-up sweetheart and chivalrous to boot. You mean to tell me you wouldn't want a friend or a pet with those kinds of qualities?

2. Because You Love Max's Rebel Without A Cause Style

Max is a bit of a jerk at first, but admittedly, his "rebel without a cause by way of California" vibe at the beginning of the film, especially where he sneers at the idea of Halloween, is pretty funny.

3. Because Allison Can Save The Day All By Herself

Can I get an "Amen" for Allison? First of all, she gives Max his own phone number back when he tries to mack on her. Then, she takes him and Dani to the Sanderson house and lays down the historical knowledge on them. And she proves time and time again that unlike Max, she's not interested in hooking up; she's interested in saving Salem.

4. Because The Sanderson Sisters Have The Best Death Scenes In '90s History

Move over Jack Dawson, because the Sanderson sisters actually have some epic deaths scenes. Be it their Salem hanging, where Winnie claps backs at the haters who doubt her powers, or the sisters bursting into glitter clouds as the sun rises at the end of the film, these witches know how to go out in style.

5. Because Billy Butcherson Is Your Favorite Ex-Boyfriend

If Dani's sass doesn't get you, then Billy Butcherson's will. He's the sassiest ex-boyfriend who ever graced the big screen and we love him for it.

6. Because "I Put A Spell On You" Is The Best Halloween Song Ever

No really, this is the best Halloween song ever made.

7. Because The Gary & Penny Marshall Cameo Is Too Good To Ignore

The director siblings are big names in their own right, but to see them being smarmy and skeevy in equal measure in Hocus Pocus is still chuckle-worthy.

8. Because Jay & Ice Are Hilariously Bad At Being Bullies

They may know how to get a kid to give away his shoes, but it's pretty boneheaded to get yourself locked up in a cage in a witch's house.

9. Because Trick-Or-Treating Looks Fun In Salem

Did you even see all those colonials with their column-lined porches, covered in autumn leaves? I would love to go trick-or-treating there.

10. Because Your Heart Goes Out To Poor Emily

Dear sweet Emily, the younger sister of Thackery and one of the young victims of the Sandersons. She was too pure for this world and we should watch the film if only to pour one out for her.

11. Because Mary Using A Vacuum As A Broomstick Is Iconic

It's just perfect. All too perfect.

12. Because Dani's Sass Levels Are Too Good To Ignore

Dani's infamous joshing of Max and his affections for Allison are almost as great as her wry observations about the wicked Sanderson sisters. She is truly one of the best things about this film.

13. Because You Love Yelling At Max's Parents For Being Oblivious

Seriously: how are these parents just going to leave their kids alone on Halloween and also not take them seriously whatsoever when they come running for help?

14. Because You Have The Sanderson Spells Memorized & You Want To Cast Them ASAP

The spell that Winnie and her sisters cast on Thackery to turn him into a mouse is almost a song and just as entrancing to listen too. Try not to be mesmerized by it.

15. Because It's Hard Not To Get Lulled Into A Happy Place With Sarah's Song

It's a really enchanting song and even though it's used for some nefarious purposes (to lure children to their deaths), it's easy to see why it works so well.

16. Because You Want A Reason To Walk Around Calling For Your Book

Admit it: "Oh booook," is probably the most fun thing to half-call, half-yodel like Winnie Sanderson.

17. Because You Love Yelling At Max For Lighting The Black Flame Candle

Why did you do it, Max? Why? I mean, it's great that you did otherwise Hocus Pocus would be a very boring film, but still.

So what are you waiting for? Go re-watch Hocus Pocus immediately and the let autumn good times being.

More like this
What Does The Presley Family Think Of 'Elvis'?
By Arya Roshanian
Everything To Know About 'My Big Fat Greek Wedding 3'
By Grace Wehniainen
Alicia Silverstone Has Recreated An Iconic 'Clueless' Scene
By Frances Stewart
Emma Thompson, Lashana Lynch, & Stephen Graham Lead Netflix’s 'Matilda'
By Sophie McEvoy
Get Even More From Bustle — Sign Up For The Newsletter