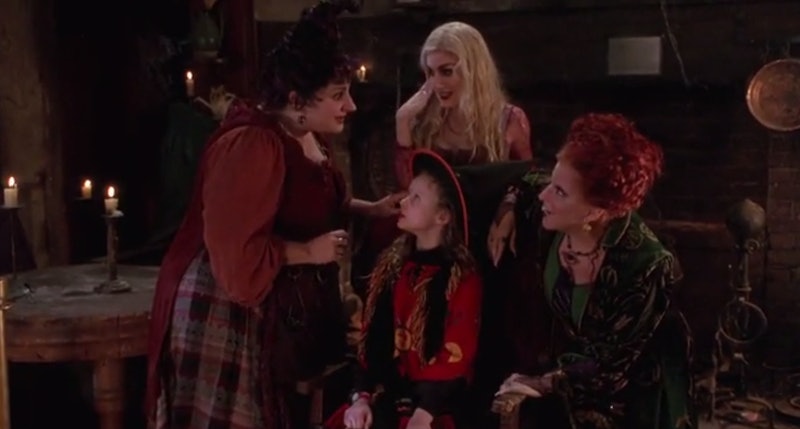 When you think of classic '90s movies, I’m guessing something like Clueless, Pulp Fiction, or Reality Bites comes to mind, right? Basically anything with a lot of dark lipstick and plaid. Less likely to feature on your list is one of the most excellent Halloween movies ever made, the Bette Midler/Thora Birch/Sarah Jessica Parker masterpiece that is Hocus Pocus . But this is crazy and sad: the movie came out in 1993, and it shows. Like, a lot. The movie’s decade has a weirdly strong influence on both aesthetics and plot. As such, re-watching it with an eye for the most ‘90s moments in Hocus Pocus was a must.

Because what year has been bigger for the '90s revival than 2016? We could have a Clinton in the White House by the end of the year, Pokémon's back in a big way, Cruel Intentions is getting a TV adaptation (starring Sarah Michelle Gellar as Catherine, no less), and there's a frickin' Spice Girl reunion. As such, there's no better year for opting for a Halloween re-watch of Hocus Pocus — especially if you're looking for '90s influenced ideas for your costume. Just make sure you keep your eyes peeled for the following details.

2. The Teen Puritan In Olden Days Salem Looks Like This

Did everyone in the 1690s have Leonardo DiCaprio's 1990s hair curtains? Yes, yes they did.

3. Check Out The Guy On The Left

5. On Some Hot Girl Sassing Him In Class, This Is Max's Response

Stride right over, hand her your digits, tell her to give you a call in front of all the other snarky teenagers in class. Takeaway? Humans were braver in the '90s.

6. It's Important That You See His Backpack

Those ethnically insensitive faux-Aztec backpacks that are so hip right now. Eat your heart out, Urban Outfitters.

7. When Bae Has Those Heavy Kate Moss Vibes

This is the aforementioned hot sassy girl, who, coincidentally, looks like a less chic version of '90s Kate Moss.

8. These Are The Town Bullies

One looks like a member of Hanson, the other looks like the tough one from any '90s boy band. I hate myself, but I have to be real with you: I'm crushing hard on the former.

9. These Are Max's Parents

His mom has Meg Ryan '90s rom-com hair. Hubby needs to step up his game.

"I'm a rap singer." Um. Was rap such a niche interest in 1993 that white kids called rappers rap singers?

13. This Is One Member Of The Bullies' Crew

And this is either his Halloween costume or his everyday attire. Not sure which is more unsettling.

14. This Is Their Whole Crew

Sure, they look like assholes, but kind of fun assholes. So many bad hats here.

15. Seasonal Decor Was A Thing

Did anyone else's mom lay out special Halloween-themed interior settings? Mine did.

16. The '90s: When Teens Actually Made An Effort With Their Costumes

And there you were thinking the '90s were all about grunge and not trying to hard. Then in struts Marie Antoinette over here, laying siege to all your preconceptions in one fell swoop.

And it's the exact same cardigan that Kurt Cobain will go on to wear on the Nirvana MTV Unplugged performance.

Before Rachel Green ushered in the highlights and layering revolution, remember those waterfalls of stubbornly unlayered, dirty blonde hair of the '90s? Dreamy.

20. Did Sabrina The Teenage Witch Find Inspiration For Their Spellbook From Hocus Pocus?

It's almost exactly the same, just minus an eye.

21. When You Say "Screw You, Beauty Rules" And Opt For A Smoky Eye And A Dark Lip

In other news, '90s Sarah Jessica Parker, I 'ship you.

22. These Boots Are So PJ Harvey

Just because they're witches doesn't mean they're not into sassy footwear.

23. Remember When Cleavage Was Considered An Accessory?

The '90s: when Wonderbra ruled the world.

24. There's A Sexist, Gum-Snapping, Wisecracking Bus Driver And Maybe It's The Nostalgia Aspect, But I Find Him Weirdly Charming

On seeing the witches, he's like "“Hubble bubble, I’m in trouble.” And then they're all, "What's a bus?" "A vehicle designed to convey you to your most forbidden desires." "I desire... children." He takes this in his stride: “That might take me a couple of tries, but I’ve got you.” I don't hate him, you know. He's all right, somehow.

25. Again: Did The Makers Of Sabrina The Teenage Witch Get Inspiration From Hocus Pocus?

Because the cat looks so much like the Salem puppet.

You looked insane, but then afterwards your hair was so perfect, and it was all worth it.

And I'm getting heavy backing singer vibes from Mary and Sarah. It reminds me a lot of basically all of those three-lady girl groups of the '90s, like this one.

And suddenly the whole witches-on-the-loose issue doesn't seem so pressing.

Especially when it's a tape player as big as a small building.

32. The Bullies Indulge In That Most Beloved Of Pre-Internet Halloween Pastimes

This brought tears of nostalgia to my eyes: TPing a house. Who has the time these days when you've got to stream Scream Queens, Westworld, and Atlanta back to back? Also, nice kilt over jeans look.

Despite it being long before the establishment of American Apparel, they're still so painfully hip.

34. Not So Subtle Product Placement

Not subtle at all.

36. When Everything's Going Wrong But Bae Looks Like A Calvin Klein Advertisement

This girl's face, though. Even her proffering salt looks like a CK One perfume advertisement.

37. More Not So Subtle Product Placement

Why do I suddenly have an inescapable urge to buy some Nikes?

38. Is This Edward Scissorhands?

It isn't, but this is very Edward Scissorhands.

39. I Really Really Need To Go Buy Some Nike Stuff

This movie loves Nike almost as much as I love this movie.

40. Is Anyone Else Getting Some Casper Special FX Vibes?

41. Can You Believe This Was Pre-The Lion King?

I miss the conical bra Madonna rocked for her 1990 Blonde Ambition tour. Can we make this a thing again?

So what have we learned today? I would argue there's one key lesson here: this isn't just a fun, Halloween-themed movie. It's a spooky '90s style revolution. So, next time you want to channel the best looks of the decade we're all still obsessed by on the creepiest holiday of the year, line up Hocus Pocus. Your amazing normcore look and addiction to Nikes will thank you for it.