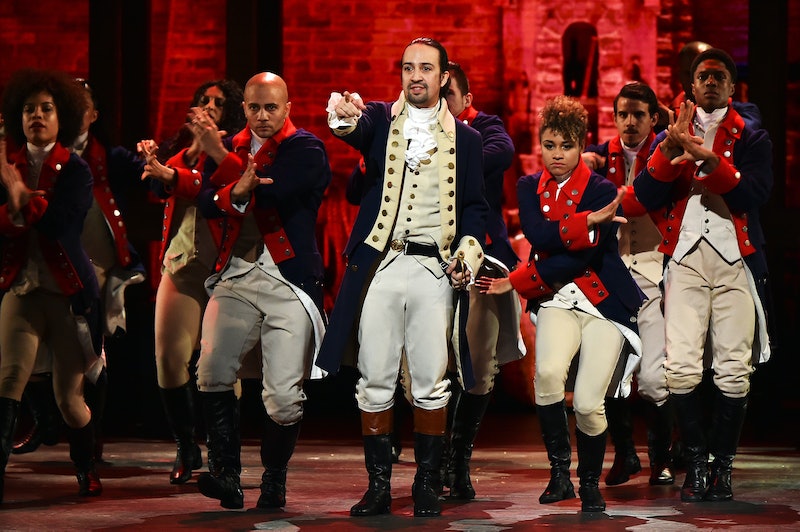 It's impossible to see Hamilton on stage right now, but one streaming service is going to put you in the room where it happens very soon. On Tuesday, May 12, the show's composer and star Lin-Manuel Miranda revealed that the Hamilton movie will premiere on Disney+ on July 3 — just in time to celebrate Independence Day with the Founding Fathers themselves. And, hopefully, in time to save 2020 from becoming a complete and total dumpster fire of a year.

While the movie — filmed at the Richard Rogers theater on Broadway in June 2016 — was originally set to arrive in theaters in October 2021, Disney decided to fast-track the premiere amid the coronavirus pandemic. Described as a "live-capture" recording in a news release obtained by Bustle, the "#Hamilfilm" (as Miranda is calling it) will combine "the best elements of live theater, film, and streaming" in order to "transport its audience into the world of the Broadway show in a uniquely intimate way."

"I’m so proud of how beautifully Tommy Kail has brought ‘Hamilton’ to the screen. He’s given everyone who watches this film the best seat in the house," Miranda said in the news release, adding that he was grateful Disney decided to push up the premiere date "in light of the world turning upside down." He also thanked Hamilton's fans for continuing to ask for a recorded version of the show for the past few years. "I’m so glad that we’re able to make it happen," he said. "I’m so proud of this show."

During an appearance on Good Morning America alongside Miranda, Disney executive chairman Bob Iger explained that now is the perfect time to bring Hamilton to the people. "In these times, to tell a story of people uniting together against forces of adversity I think is quite relevant and also quite important," he said. Hamilton opened on Broadway in August 2015 and quickly became an international phenomenon, earning a record-breaking 16 Tony Award nominations, ultimately winning 11 trophies, including Best Musical.

The movie was filmed the week before several members of the show's original cast — including Miranda, Jonathan Groff, Leslie Odom Jr., and Daveed Diggs — left the show, and Miranda says the version that will be available to stream on Disney+ captures all of the magic of those performances. "It just captures that moment in time so beautifully," he said on GMA. "Watching it brings me right back there with that incredibly, once-in-a-lifetime company."

The #Hamilfilm premiere will also provide a bright spot for theater fans this summer, especially since the big screen adaptation of Miranda's first musical, In the Heights, will no longer arrive in theaters in June, due to concerns about the spread of the coronavirus. In the Heights will now premiere in the summer of 2021. Still, at least now fans will be able to celebrate Independence Day weekend by watching history happening in Manhattan — from the comfort (and safety) of their own homes.

More like this
How Marvel’s 'She-Hulk' Changes Her Comic Book Origin Story
By Brad Witter
Here’s When 'She-Hulk' Takes Place In The MCU
By Brad Witter
Everything To Know About 'Evil' Season 4
By Meguire Hennes
Who Plays Trent In 'Never Have I Ever'? Benjamin Norris Calls His Character A “Himbo Stoner”
By Grace Wehniainen and Radhika Menon
Get Even More From Bustle — Sign Up For The Newsletter