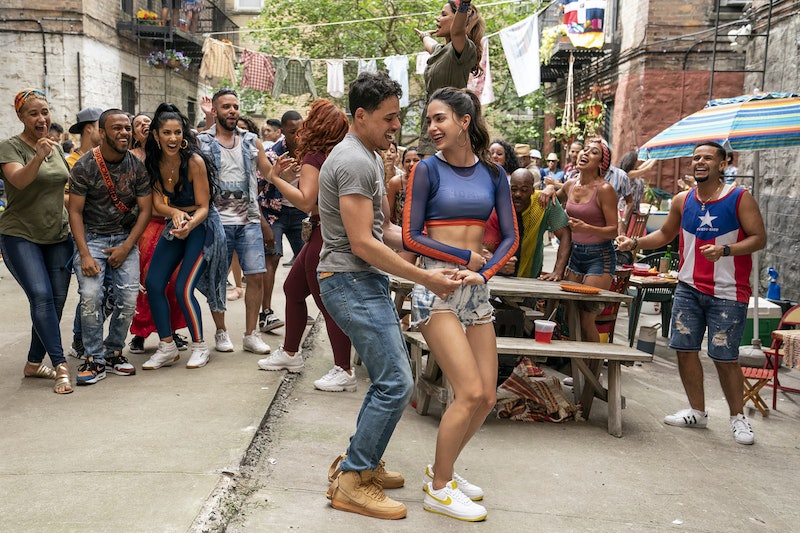 Lin-Manuel Miranda's first musical is getting the big screen treatment. The official In The Heights trailer shows a version of New York City's Washington Heights where everyone is working on their dreams in hope's they will come true. Oh, and everyone breaks into song. Summer of 2020 can't come fast enough.

"A dream isn't some sparkly diamond," Usnavi (A Star Is Born's Anthony Ramos) says in the trailer. "There's no shortcuts. It's rough." Cue all the tears. The film, directed by Crazy Rich Asians John M. Chu, features Miranda's original soundtrack, with songs tackling everything from first loves to immigration.

In The Heights, which hits theaters June 26, is also getting political, with the trailer hinting at a focus on the DREAMers, young immigrants brought into the country by their parents who are fighting for legal status. President Donald Trump has proposed extreme legislation that would make it difficult for DREAMers to obtain legal status so it's definitely a timely update for the 2008 musical.

At its core, In The Heights is a musical about the American Dream and how hard it can be to achieve. "It's a story about a block that was disappearing," Unsavi says in the trailer. "A barrio called Washington Heights where the streets were made of music."

But, as Chu pointed out at a Dec. 11 event where he and Miranda teased the trailer, per Variety, this is an immigrant story that so many people can relate to whether they grew up in the Heights or not. “When I saw the show years and years ago, it reminded me of my family,” Chu said. “I grew up in an immigrant family. The community and the fight to survive and the right to dream was everything to me. That’s the American story."

Others seem to agree that this musical gets at something personal. The day before the trailer dropped, Miranda tweeted, "All I want for Christmas is for you to post footage of your reactions when you watch the #InTheHeightsMovie trailer tomorrow." The holiday came early for Miranda, since fans took to Twitter to share heartfelt messages about finally feeling seen. Not to mention all the tears they cried watching it.

"If you see a Latinx person crying at their desk today," a user named @normajeansays tweeted, "They've probably just seen the trailer for #InTheHeights." While another person named @CatWoman tweeted, "The @intheheights first movie trailer just dropped and I'm about to cry tears of joy while going through security in my office."

And now we're all crying.