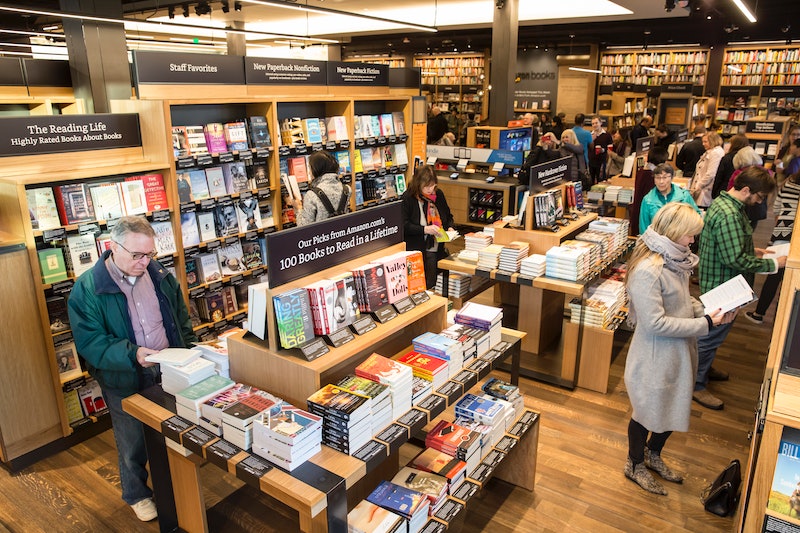 It may be over three decades old, but Margaret Atwood's classic dystopian novel The Handmaid's Tale is the most-read book of 2017. Thanks in part to the success of Hulu's award-winning adaptation of the book, and the Trump effect, the feminist favorite has become a must-read novel that has everyone talking — again.

To say Atwood's chilling dystopian novel is having a moment would be a serious understatement. Not only has it seeped into all aspects of pop culture in 2017, from music to comedy to television and more, The Handmaid's Tale was also the number one most read title of the year, according to Amazon's Kindle and Audible sales. It beat out popular titles including Stephen King's It, J.K. Rowling's Harry Potter and the Sorcerer's Stone, and even George R.R. Martin's A Game of Thrones. It topped sales everywhere in the United States except for Ohio, Utah, Puerto Rico, and Guam. Not only was it a best-seller and a widely read title, but The Handmaid's Tale was also the third most wished for book of 2017.

It may seem odd that a book written in the 1980s has had such a powerful resurgence so many decades later, but over 30 years after its original publication, The Handmaid's Tale feels as relevant as it ever has. It's a disturbing story of a political uprising that transformed the United States into the Republic of Gilead, a brutal and repressive monotheocracy that stripped women of their rights and elevated white men to the ultimate levels of power. Many Americans have spent the last year drawing comparisons between the country's current political climate and Atwood's nightmarish fiction, and the effect has been noticeable in the publishing world. Following the election of Donald Trump, book sales rose 200 percent, according to Russell Perreault, the head of publicity of Anchor Books, who currently publishes The Handmaid's Tale. But it hasn't just been the book world that has been touched by The Handmaid's Tale.

In the political realm, women have been using the book's symbology to protest the Trump administration, and the GOP's destructive agenda. Earlier in the year, they showed up in Washington donned in red capes and white bonnets to protest the now failed healthcare bill, and just last week, a group of costumed women rallied outside of Alabama GOP Senate candidate Roy Moore's campaign event. Saturday Night Live's parody sketch about The Handmaid's Tale was one of the most popular and most powerful skits of last season. The Handmaid's Tale has even found its way to the fashion world where it has been consistently showing up in collections and on the runway.

While The Handmaid's Tale seems to be dominating just about every corner of pop culture, it's the book's most recent small screen adaptation that has helped it really find public traction. A month before the highly anticipated show's premiere, Hulu's The Handmaid's Tale was featured in an advertising spot on Super Bowl Sunday. Days later, Atwood's novel jumped to the number one spot on Amazon's best-seller list. Later in the year following the show's release, The Handmaid's Tale secured the top spot on the list of most-read books of the summer, beating out Daniel Silva's highly anticipated House of Spies and perennial favorite Harry Potter and the Sorcerer's Stone.