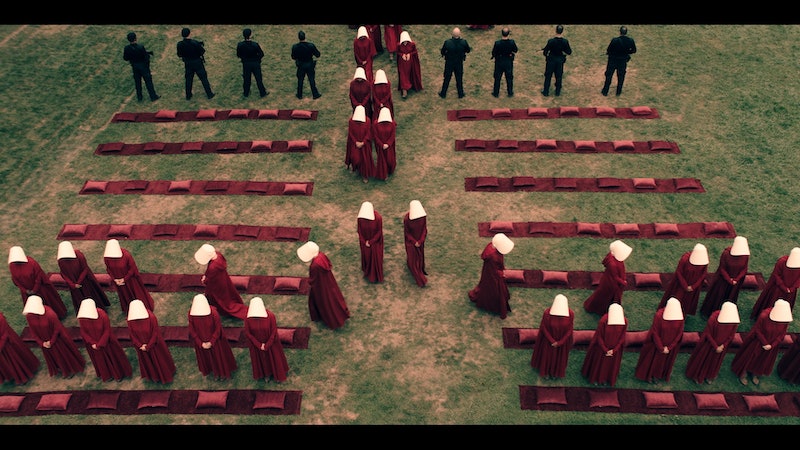 Hulu's upcoming series based on a portion of Margaret Atwood's dystopian world, The Handmaid's Tale, is set to feel uncomfortably relevant. The book, which was published in 1985, is set during a futuristic, hyper-religious part of the United States called Gilead in which women are legally designated as property of the state. But producer Bruce Miller and his team aren't just waiting until The Handmaid's Tale premieres April 26 to strike unsettling fear into our hearts. In fact, The Handmaid's Tale promotion at SXSW is perfect and appropriately terrifying.

For the Austin festival that highlights the best of the best in film, TV, music, and interactive technology, Hulu hired a bunch of women to appear as "handmaids" and walk silently in pairs of two in straight lines. SXSW-goers shouldn't be shocked to stumble across these women walking around the events, stopping at traffic lights and peeking in windows with their eyes downcast.

In the book and the new series, these women, who wear creepy red dresses and white bonnets the totalitarian government designates for them, are forced into sexual servitude to create children in an environmentally-devastated world with low birth rates. The main character, Offred (not her birth name, but the name that describes the man she belongs to) aims to survive the terrifying world and find the daughter that was taken from her.

It's one thing to read about a troop of women walking around like this or see it in a teaser, but it's an entirely different animal to see it happening in real life. This SXSW promotional endeavor is so real, and the reactions from festival-goers speak to that. This genius marketing move will definitely garner a lot of intrigue for the upcoming Hulu series.

According to the official Twitter account of The Handmaid's Tale, festival-goers brave enough to make conversation with these spooky women can ask, "should we walk by the river?" What happens when such a question is broached to one of the "handmaids" is (as of yet) unknown.

While many people might be creeped out and unsettled by this performance art, others are wowed by what they see as a brilliant protest to the current state of affairs in the U.S. Jenny Wall, head of marketing at Hulu, said in a SXSW panel that this endeavor isn't actually a protest, per se, saying, "we don't want to use politics to promote a show" and that "even before anything happened in politics, it was a great story to tell." However, she also admitted that the marketing for The Handmaid's Tale has changed slightly in light of recent political events and that the content speaks for itself.

Political statement or not, this marketing move is the perfect one for The Handmaid's Tale. Is it April 26 yet? This unsettling dose of intrigue has whet my appetite for more of Atwood's disturbing futuristic world.