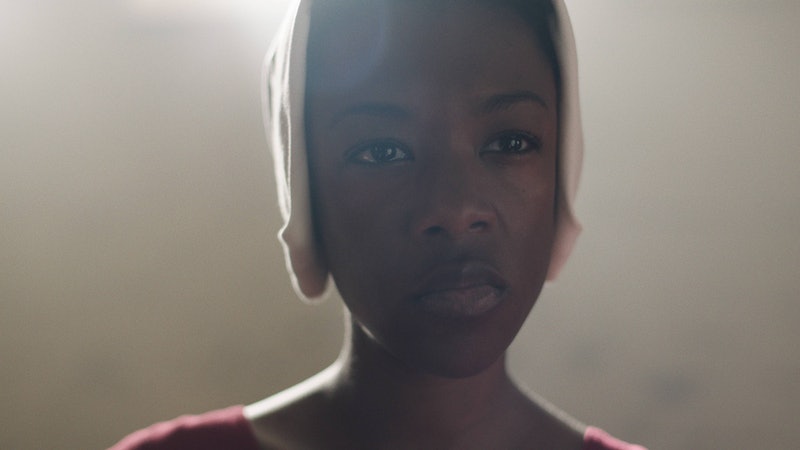 When The Handmaid's Tale premiered on Hulu last spring, it felt prescient, almost foreboding. The original novel — penned by Margaret Atwood amid the Reagan era politics of 1985 — had always been relevant, but in the wake of the 2016 presidential election, it had newfound heft. And in The Handmaid's Tale Season 2, the story will get even bigger. Star Samira Wiley — who's up for an Emmy for her role as Moira — tells Bustle the show's next chapter will widen, drawing back to include the perspectives of more suppressed women, that, until now, have only been spoken of in hushed, cautionary tones, but never seen.

"One of the things that we hear so much about in the first season that we don’t see is the women who are sent to the colonies," Wiley says. "We’ve heard of them, but what are they? For a person who’s been classified as an 'unwoman,' what is their life like there? What do they look like? What’s their day to day? So we’re gonna really be able to see that."

The first season was largely centered around "legitimate" women. The handmaids bear children, the wives raise them, the aunts oversee the process, and the Marthas tend to the house. But those "unfit" to fill some antiquated stereotype — the unmarried, the sterile, the gay — or who refuse to follow Gilead's rigid, oppressive rules are denounced, deemed "unwomen," and shipped off to the colonies to shovel toxic waste. Showing what life is like in these fringe hellscapes will certainly add context to the way Gilead operates and shed light on just how eroded their environment has become, but it's also likely where viewers will find a familiar face. Fans know that Emily (Alexis Bledel) is returning for Season 2, and if she's still alive after publicly killing that guard, it's a safe bet to say she's been exiled to the colonies.

Just under three months since the first season wrapped, Wiley has yet to see scripts for the series' next outing, so she can't spill many details, even if she wanted to. She has, however, spoken with showrunner Bruce Miller about what's next for Moira. Last time viewers saw her, she'd finally fled from Jezebel's sadistic brothel and sought refuge in Canada, where she reunited with June's husband, Luke.

"We saw Moira go through this process of getting a health insurance card, getting money, getting all of these resources that a person is due," Wiley says. "She was so downtrodden, and to see her go from being in Jezebel’s and sort of giving up, and having this rise afterward and seeing her come back to herself really resonated. [In Season 2] we’ll be able to follow her and Luke and their journey [in Canada] and — I don’t know yet — but hopefully they have a plan."

One of the biggest changes moving forward is that Season 1 began filming before the election. It captured the zeitgeist of the political climate — in large part because of the story's lasting pertinence — but it wasn't a direct response. Now, the show's writers have the chance to craft their narratives around what's happening in present day.

"I think we’ve found this spot that people are responding to and it’s not so overt that it’s hitting people in the head, but it also is hitting people in the head. It feels so close to us, even if it’s not, and I think that’s been successful," Wiley says. "I don’t know if they want to push the envelope a little more or not, but I’m sure whatever they do is gonna be great."

If Season 1 is any indication, it will be more than great; it will be triumphant — and more women of Gilead will get the imperative chance to have their stories told.

More like this
Why Sadie Sink Is Hopeful Max Will Return In Stranger Things Season 5
By Brad Witter
6 Mind-Blowing Fan Theories About How Stranger Things Will End
By Kadin Burnett
What Working At Marvel Is Really Like, According To A 'Ms. Marvel' Co-Creator
By Gretchen Smail
'Friends' Creator Marta Kauffman Opened Up About Misgendering A Guest Character
By Grace Wehniainen
Get Even More From Bustle — Sign Up For The Newsletter