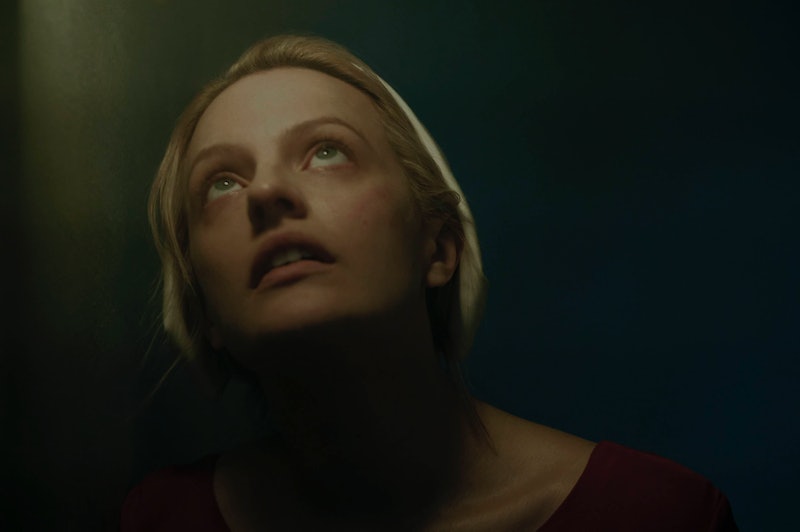 Despite the fact that the show premiered only a week ago, Variety reported that The Handmaid's Tale has been renewed for Season 2. And if you've been watching with the same level of rapt intensity that I have, then you'll no doubt be celebrating, while also worrying about how much worse your nail-biting habit is going to get. According to Hulu's announcement at their Upfront presentation on Wednesday, Season 2 of The Handmaid's Tale will premiere in 2018. While Season 1 has already stepped a little beyond the universe of Margaret Atwood's 1985 novel, a second season could provide an exciting opportunity to expand the universe even further.

Within Atwood's seminal novel, the story is focused on life in the harrowing totalitarian dystopia of Gilead from the perspective of a handmaid named Offred (played with devastating power in the Hulu adaptation by Elisabeth Moss). The story manages to weave together past and present events, providing captivating glimpses of a diverse set of characters and hinting at larger stories without being able to overtly explore them. The Handmaid's Tale thrums along with the foreboding desperation of the unspoken — secrets that are punishable, or experiences that can't be expressed out loud. And as a TV show, the story appears to be relishing in slowly revealing these unspoken moments and crushing secrets to the audience.

Season 1 of Hulu's adaptation already feels devastating for this reason, but Season 2 has the potential to broaden the narrative scope. It could introduce new characters and storylines, or further explore existing characters with the sort of complexity and depth that would be fascinating to watch.

After all, while we've seen flashbacks that reveal Offred's backstory before her capture, we've only been able to so far see the briefest of glimpses on the backstories of other handmaids like Ofglen (Alexis Bledel) and Moira (Samira Wiley). Obviously, it's still early in the show's first season and I have no doubt that we'll be learning more about these characters, but the promise of a second season seems to suggest the potential for a deep exploration of all of the main characters and their backstories.

It'll be deeply gratifying to learn more about their pre-handmaid lives, but it'll also be incredible to see the backstories of characters like The Commander, Serena Joy, and Aunt Lydia played out. Though these characters are presented as antagonists within the show, it's their brief moments of strange humanity that makes them so disconcerting to watch sometimes. Seeing deeper into their humanity, and their lives prior to their current situation, could be truly eye-opening and heartbreaking, providing nuances of the characters that we never imagined could exist.

But there's also the original ending of The Handmaid's Tale book to consider, too. Leaping forward to the year 2195, attendees at a symposium about Gilead (which no longer exists) are learning about the events of the past via Offred's diary. The second season of the show then, could also potentially provide an opportunity to look to the future of a post-Gilead society, slowly revealing the world that succeeded it and how it came to be.

Between the time-jumping of the story, the captivating characters, and the unsettling politics and regime of the location, The Handmaid's Tale has a lot of potential to explore new or deeper angles as it progresses. And whether the show is exploring the apathetic silence of the past, the enforced silence of the present, or the stunned chatter of the future, I've got a feeling that Hulu's The Handmaid's Tale is going to have plenty to say for many seasons to come.

More like this
‘The White Lotus’ Is Coming Back For Season 2 This Fall
By Bustle Editors
'Bridgerton’s Jonathan Bailey & Simone Ashley Just Teased A First Look Of “Kanthony” In Season 3
By Grace Wehniainen, Alyssa Lapid and Sam Ramsden
The 'First Kill' Cast & Fans Are Disappointed Over The Show’s Cancellation
By Brad Witter and Sophia Moore
Ellen Pompeo Is Stepping Back From 'Grey Anatomy' For More Than Half Of Season 19
By Brad Witter and Sophia Moore
Get Even More From Bustle — Sign Up For The Newsletter