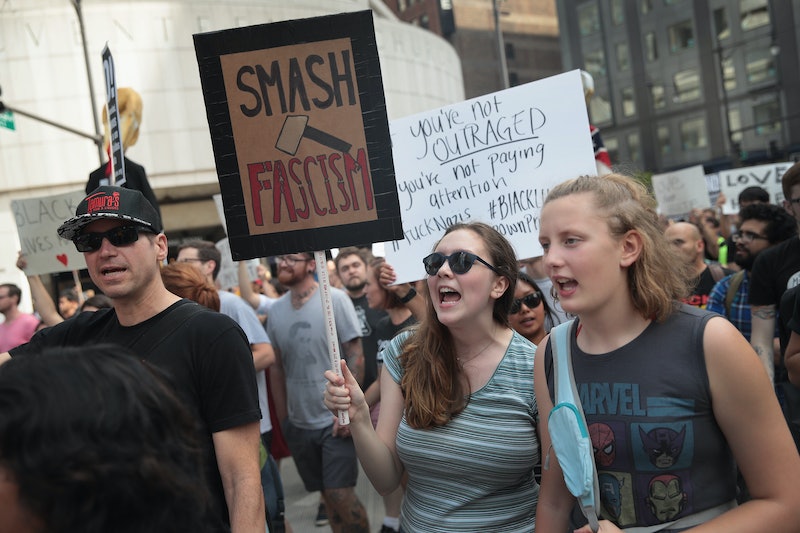 The country is reeling from the events that took place in Charlottesville this weekend. Violence at a white supremacist rally in the town — one complete with marchers using Nazi slogans and salutes — has left three people dead, one the victim of a white supremacist who drove a car into a crowd of counter-protesters. Both Republicans and Democrats have publicly condemned the hate spewed at the event, with Republican House Speaker Paul Ryan calling the white supremacists' views "repugnant" on Twitter and Democratic Senate Minority Leader Chuck Schumer tweeting, "Of course we condemn ALL that hate stands for." While President Trump seems unable to call the violence what it is, issuing a statement laying the blame for Saturday's violence on "many sides," many others in and outside the government have recognized what happened as an act of domestic terrorism.

Viewing the horror with shock but not surprise, it felt to me like the country has perhaps reached a turning point; maybe, I thought, this will be the thing that drives systemic change, the thing that finally puts institutional racism front and center in our culture.

And then, like clockwork, it happened: the “good white people” showed up. They announced their arrival with calls for kindness and colorblind humanity, and I, as a person of color, realized this may not be a turning point at all.

There have been many takes on the events in Charlottesville, but none more frustrating than “good white people” exclaiming that "This Is Not America," epitomized by the hashtag #ThisIsNotUs. Since being publicized on Saturday by Lady Gaga as a hashtag to be used "to tweet positive messages," #ThisIsNotUs has become the source of some controversy. On Twitter and Facebook, the hashtag, initially used by many white people to proclaim that the white supremacist violence at Charlottesville did not reflect their views, is now filled with people of color calling out the issues they have with the idea that white supremacist terrorism is "not us," and rightfully so — as the criticisms below and beyond point out, this is very much us; the violence at Charlottesville is America as it has always been.

#ThisIsNotUs forgets that the United States was built through the genocide of Indigenous Americans and the slavery of black people. #ThisIsNotUs ignores the fact that in earlier versions of our constitution, a black individual was only considered three-fifths of a human. To say “this is not us” is to forget that the statue the white supremacists gathered around stands as a tribute to Robert E. Lee, a Southern Confederate hero whose rumored abolitionist leanings have largely been proven to be false. To exclaim that “this is not us” is to ignore the reality that the majority of the acts of terrorism in the United States in the last eight years have been committed by white supremacists and right-wing extremists. One doesn’t have to rewind history very far to see how wrong #ThisIsNotUs is.

The list of reasons the hashtag is wrong goes on and on, and many people have pointed out the vast number of problems with the sentiment.

But one question remains: why do so many “good white people” interact with, identify with, and defend this extremely problematic concept?

A cursory glance at the hashtag shows — again, a surprise to no person of color — that saying This Is Not America and #ThisIsNotUs is more about absolving the “good white people” than it is about actually standing in solidarity with people of color. But this issue does not end with the hashtag — it's an example of a much larger problem.

To see how this works, look no further than the statement from the governor of Virginia.

He rightfully calls out the white supremacists on their hate, but immediately pivots to imply they are outside agitators, then tells them all to "go home and never come back" because they do not represent the people of Virginia and "are not wanted" in the state. The disconnect continues as he mentions George Washington and Thomas Jefferson as true patriots, describing them as people "who brought our country together," conveniently forgetting that they were slaveowners who did not believe black people to be full human beings.

By being a 'good white person,' they get to condemn without sacrificing their privilege.

That is not an acceptable option.

This practice allows its practitioners to return every conversation to a status quo where whiteness is always centered. This can be seen in the attempt by "good white people" to co-opt the hashtag #SayHerName to honor Heather Heyer, who was killed after an alleged white supremacist drove a car through a crowd of protesters at the Charlottesville protests.

#SayHerName is a social movement created by the African American Policy Forum to combat the erasure of black women whose stories of injustice often get ignored. From Sandra Bland to Rekia Boyd, the movement seeks to ensure that these women’s stories are remembered.

Heyer died while fighting hate and her life should be honored. But it's not OK to co-opt #SayHerName in order to do it. Despite numerous calls by black women people to stop using the hashtag in reference to Heyer, many continue to do so. By using #SayHerName to discuss the death of a white woman, “good white people” are doing exactly the thing that the hashtag was created to stop: erasing black women.

In the end, what remains is a hard truth for some to swallow. As pointed out by activist Brittany Packnett, not every white person is a white supremacist but “white supremacy benefits all white people. Including the ones with no torches. That’s why it survives.” To pretend otherwise is to be complicit in the systemic subjugation of minorities in this country.

So as the many counter-protests in solidarity against racism occur around the country, I’ll end with a message directly to “good white people.” The country doesn’t actually need “good white people.” What it needs are actual allies; allies who listen to people of color, allies who don’t speak over people of color, allies who do not need to be told that they are good, allies that do not center their activism around whiteness, allies who are not colorblind. If this is too much to ask, if you grow defensive when challenged, if your first instinct is to lash out, maybe you were never actually truly a good white person to begin with.

More like this
10 Thanksgiving Alternatives You Can Celebrate This Month
By Katie Mitchell
Ayurvedic Principles & Family Are At The Root Of Fable & Mane
By Justine Knight
It’s About Time Black Girls’s Voices Were Heard – & 'Girlhood Unfiltered' Is The Start
By Paula Akpan
Iran Has Issued A Death Sentence Over Mahsa Amini Protests
By Catharina Cheung, Darshita Goyal and Maxine Harrison
Get Even More From Bustle — Sign Up For The Newsletter