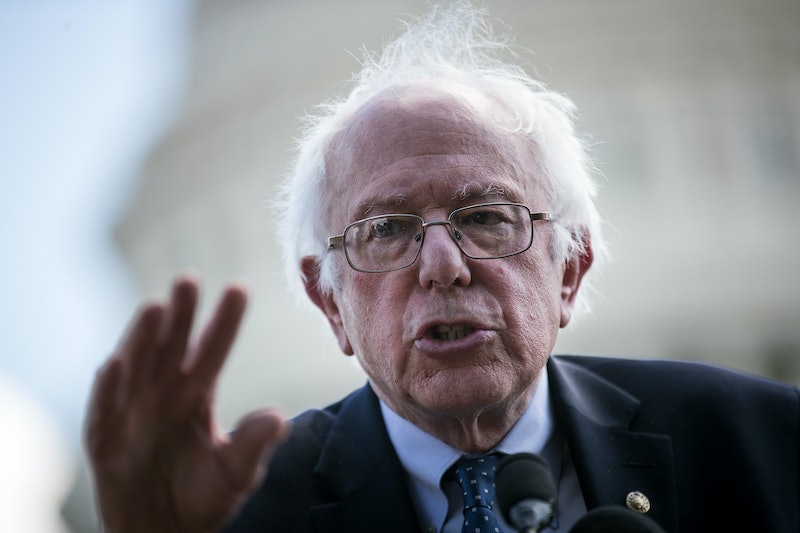 Following her death at the ongoing conflict in Charlottesville, Virginia, on Saturday, Sen. Bernie Sanders offered to Heather Heyer's family via Twitter Sunday afternoon and didn't back down from the real cause of her death. "Our condolences go out to the family of Heather Heyer who was killed by a terrorist as she protested Neo-Nazism and white supremacy," Sanders said, continuing in separate tweets:

Heather sacrificed her life in the fight for social and racial justice. She will not be forgotten. The best way for us to truly honor her memory is to make sure that, every day, we continue that struggle.

Heyer, a 32-year-old paralegal from Charlottesville, died Saturday while attending counter-protests for the "Unite the Right" rally. A young white supremacist protester drove his car through a crowd near the University of Virginia, killing Heyer and injuring over a dozen others. There are little to no reports of the condition of the other victims, suggesting none other than Heyer had major injuries. The suspect, who came all the way from Ohio to attend the rally, is now in custody being held on suspicion of second-degree murder, malicious wounding and failure to stop in an accident that resulted in death, according to CNN.

Sanders' post on Heyer's death highlights some of the forthcoming rhetorical issues surrounding the Charlottesville conflict. Historically, it has been difficult to find anyone willing to describe incidents involving the far-right as terrorism. However, a growing force of prominent figures, including Sen. Ted Cruz and National Security Advisor H.R. McMaster have used that word in connection with the events in Charlottesville.

"I think what terrorism is, is the use of violence to incite terror and fear, and of course it was terrorism," McMaster said Sunday during an interview on Meet the Press. "Certainly, we can confidently call it a form of terrorism."

Heyer herself was a fan of Sanders and campaigned for him via social media. Although she isn't alive to see his tribute, there's almost no doubt that she would have appreciated Sanders' recognition of her work. According to her mother, Susan Bro, Heyer shared many of the same qualities as the social justice-oriented senator.

Bro told HuffPost in an interview:

She always had a very strong sense of right and wrong, she always, even as a child, was very caught up in what she believed to be fair. Somehow I almost feel that this is what she was born to be, is a focal point for change. I'm proud that what she was doing was peaceful, she wasn't there fighting with people.

Sanders has been a champion of the left throughout the last several years, and seems to have no intention of changing that mission. His ability to speak clearly and say what people want and need to hear has contributed enormously to his success as a politician, and now it's helping people come together in another challenging time for the nation.