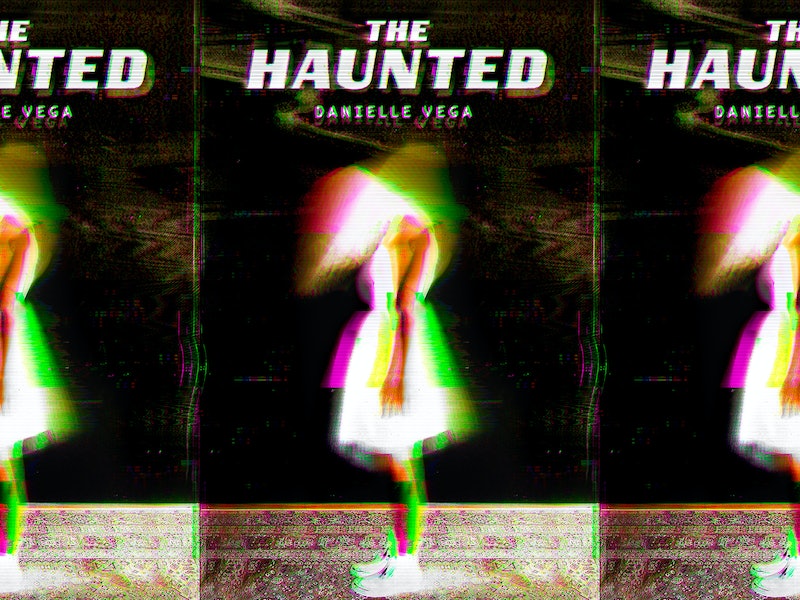 If you're already all up in your spookiest feels this fall, you're going to love this news: Danielle Vega is releasing another YA horror novel next year, and you can start reading it right now. Vega, who is already well-known for her supremely scary The Merciless series — which centers around exorcisms and torture and a blood-curdling religious cult — and Survive the Night — about one horrifying murder-filled underground rave — will be hitting shelves again in June 2019 with The Haunted. Bustle has an exclusive look at the cover and chapter one below.

Here's what we know about The Haunted so far: the book is written in the vein of horror movies like The Conjuring and it follows 17-year-old Hendricks Becker-O'Malley, the new girl in town. She has a bit of a dark past, and she doesn't expect that her new classmates — or the fixer-upper her parents bought — will offer much excitement. But then she gets sucked into the popular crowd at school and learns that her new house is rumored to be haunted. She doesn't believe it... until she starts hearing blood-curdling screams coming from the basement. And then her brother starts waking up with mysterious scratches. And then her dad falls down the stairs with no explanation. Now Hendricks has no choice but to believe that her house is haunted by ghosts who want her family gone.

This book promises to be as intensely terrifying and psychologically chilling as Vega's previous novels. Oh, and the gorgeously creepy cover? Yeah, it's just the deliciously spooky icing on one supremely bone-chilling cake. Check it out below.

Ok, so this isn't Harry Potter and the actual cover doesn't move. Still, how spooky does this book sound? Scroll down for the cover and chapter one and pre-order the book, out June 4, 2019, now.

Hendricks didn’t know what pissed her off more: starting over, or becoming a cliché.

Back at her old school, she’d waged her own private war on clichés. She’d had rules and everything: No burn books or mean girl comments. No clamoring to be named homecoming queen.

“Good thing I’m not a quarterback,” her ex-boyfriend, Grayson, had said, brow furrowed. “You have anything against soccer players?”

“Only if you’re the captain of the team,” Hendricks had told him, teasing, and when he’d pouted she’d added, “Hey, I didn’t know you were going to ask me out before I came up with the rules!”

Which was true. Rule or no rule, everyone knew it was borderline impossible to reject Grayson Meyers. He had a gravity that drew people in. A smile that said trust me, and a deep, throaty voice that made him seem older and more mysterious than he actually was. Of course now, after everything that had happened, Hendricks couldn’t think about his smile or his voice without feeling a rush of shame.

Shame like she should’ve known better, should’ve followed her own rules. Shame like, really, all of this was her fault.

Of course now, after everything that had happened, Hendricks couldn’t think about his smile or his voice without feeling a rush of shame. Shame like she should’ve known better, should’ve followed her own rules. Shame like, really, all of this was her fault."

The backseat of her parents’ car felt suddenly hot and airless. Hendricks closed her eyes, pretending she was in her closet back home. She imagined coats rustling against her cheeks, shoes pressing into her legs. The low drone of the car radio and her parents’ murmured voices sounded far away, muffled by the other side of a door.

Breathe, she told herself and her lips parted, air whooshing out. She’d spent most of the last two months hiding in that closet, and it was surprisingly comforting to imagine being there now. She’d always felt safe there. But it was miles away now. And it didn’t belong to her anymore.

She opened one eye, head tilted toward the car window. Drearford’s Main Street rushed past her face, blurry beyond the icy glass. People clutched their jackets closed as the wind picked up and whipped through the bare trees.

“ . . . but if we take Metro North, we should be back around midnight,” her mother was saying from the passenger seat, thumbs tapping her phone screen. “One a.m., at the latest.”

“Maybe we could stay overnight, just this once. The contractors could always meet us in the morning.” Her father had lowered his voice, like he thought Hendricks might not hear him.

A pause, and then, “I . . . really wouldn’t feel comfortable with that, yet.” Her mother spoke softly, too, but they were only sitting two feet away. Hendricks felt rather than heard the pause in their conversation, and pictured their eyes flicking to the rearview mirror, casually, like they weren’t checking on her.

She kept her eyes trained on the window, watching her breath mist the glass.

Drearford, New York, was one and a half hours north of Manhattan and nearly four hours from Philadelphia. Almost — but not quite — too far to drive in a single night. Population: 12,482. Current weather: 22 degrees and gray. Gray like the sky was sucking the life from its surroundings, leaving trees and grass and bodies of water colorless and covered in a thin layer of frost. Philadelphia—where Hendricks had lived up until a week ago — was also cold in January, but it was a bright, glittering kind of cold. This place just looked dead.

Drearford, New York, was one and a half hours north of Manhattan and nearly four hours from Philadelphia. Almost — but not quite — too far to drive in a single night. Population: 12,482. Current weather: 22 degrees and gray."

Before she could stop herself, Hendricks pictured Grayson drinking from a bottle of stolen MD 20/20, offering it to her.

It had been their thing, sort of like an inside joke.

Dare you to go to the movies with me Friday night.

Dare you to change your Facebook status to “in a relationship.”

It had been their thing, sort of like an inside joke.

Dare you to go to the movies with me Friday night.

Dare you to change your Facebook status to “in a relationship.”

Hendricks swallowed. The memories felt like something caught in her throat. She reached into her pocket instinctively, fingers curling around her cellphone. But she didn’t pull it out.

Clean slate. That’s how her parents had sold the move to Drearford. One by one, Hendricks released her fingers, letting the phone settle back into her pocket.

The car pulled to a stop. Hendricks turned her head and saw a building on the other side of the street, hunching low to the ground, like a predator. A few cloudy windows broke up the dirty brick walls, and a flagpole stood directly in front of the main doors, flag flapping like crazy in the vicious wind. Hendricks’s eyes flicked to the left, landing on a sign:

Something heavy settled in her gut. The idea of a new high school, new boyfriend, new everything hadn’t felt real until this second. She wanted to throw open the car door and run down the street. Let the wind blow her away.

Don’t think like that, she told herself and her eyes moved to the front seat, worried that her parents knew, somehow. She tried to keep the nerves from her voice as she asked, “We’re here?”

Her mom twisted around to face her. “You know the way back home, right? Two lefts and a right on Maple?”

Their new house wasn’t even a ten-minute walk from here. Hendricks nodded.

“There’s money for pizza for dinner, or leftover chicken in the fridge if you feel like something healthier.” Her mother chewed her lower lip. Hendricks knew what was coming. “Are you sure you want to—”

“Bye.” Hendricks grabbed her backpack and climbed out of the car, door slamming behind her. They’d been over this before. Her mom wanted Hendricks to homeschool until senior year started in the fall. She tried to make it seem like this was for Hendricks’s benefit, that she’d have fun helping them renovate their new house, but really, Hendricks knew her mother just wanted to be able to keep an eye on her at all times. As though that might keep her safe.

Climbing out of the car, Hendricks felt a sudden pang of guilt. It was her fault they had to start over. They’d all been happy in Philadelphia. A year ago, it never would’ve occurred to any of them to move.

Climbing out of the car, Hendricks felt a sudden pang of guilt. It was her fault they had to start over. They’d all been happy in Philadelphia. A year ago, it never would’ve occurred to any of them to move."

Clean slate, she told herself, again.

She was halfway up the steps to the school when she heard a noise, leaves rustling, and froze, squinting into the shadows of a large oak tree.

A boy stood beneath the branches, cigarette pinched between two fingers. He wore the standard outsider uniform: black T-shirt over black jeans tucked into beat-up black combat boots. Curled upper lip. His skin and hair were both dark. His eyes were even darker. Hendricks stared.

He jerked his chin in Hendricks’s direction, then dropped the cigarette butt into the gnarled roots of the overgrown tree and stomped it out, moving back into the shadows. The smell of smoke lingered behind him.

Now, it felt strangely comforting. At least she knew her role.