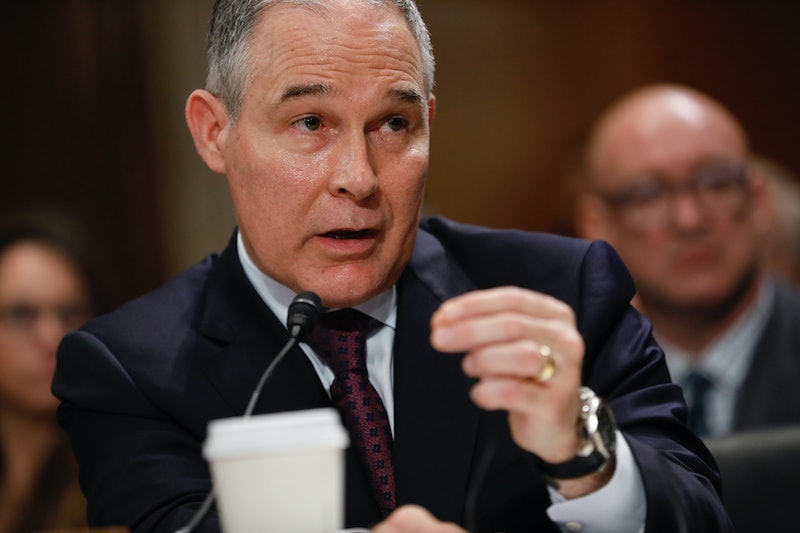 Comparing the Republican view of climate change with that of liberals and Democrats can often feel akin to comparing whole different worlds, a metaphor sadly apt for this topic. Democrats are united in advocating policies that mitigate the human-created causes that are impacting global climate change, while many Republicans still dispute to what extent humans contribute to environmental damage at all. To be fair, most Republicans do concede that the climate is changing. But it seems rather convenient to be so uncertain about how much humans are driving that change, especially when it comes to policies that impact the fossil fuel industry. Few walk this line between climate change acceptance and denial of humans being behind it better than Scott Pruitt.

As the new administrator of the Environmental Protection Agency, Pruitt is now leading an agency he has sued — multiple times. While attorney general of Oklahoma, Pruitt most recently joined with 28 other states in challenging President Obama's Clean Power Plan.

Critics of Pruitt allege that he has acted at the behest of big oil companies that would benefit from a less involved EPA. Pruitt contends that he is simply trying to return to federalism and the "rule of law," claiming the regulatory state has been granted unconstitutional powers under Obama.

In his op-ed for The National Review, Pruitt opens by comparing the tactics proposed by Democratic AGs — including "costly litigation" and "criminal prosecutions" of big oil companies — to the tyranny of King George III. He goes on to call global warming "one of the major policy debates of our time," and states it is a debate "far from settled." Pruitt criticizes the way Obama enacted the Clean Power Plan, noting it lacked any input from Congress, and provided no real way for voters to have a say in its implementation. Pruitt also insists it is not his job to "pick winners and losers," but instead to "hold the EPA accountable" and make sure "consumers... have access to reliable, affordable energy."

Some of this commitment to the rule of law over individual ideology seems more difficult to argue in light of a New York Times investigation into Pruitt's behavior while acting as Oklahoma AG. The paper uncovered a trove of emails between Pruitt and Devon Energy, one of the largest oil and gas companies in the Sooner State. In fact, Pruitt's office sent a letter to the EPA that was a virtual copy of one it received from Devon. This appeared to be part of a larger pattern among several Republican AGs acting in a "secretive alliance" with other major fossil fuel companies.

What else has Pruitt said about climate change? Just this week, Pruitt said he did not yet know if carbon dioxide levels were a primary factor in global warming. Speaking on CNBC's "Squawk Box," Pruitt said, "I think that measuring with precision human activity on the climate is something very challenging to do, and there's tremendous disagreement about the degree of impact, so no, I would not agree that it's a primary contributor to the global warming that we see." Pruitt insisted that study of the issue of climate change should continue, presumably to gather more "conclusive" evidence.

As many outlets were quick to point out, Pruitt's assertion contradicts that clearly stated on his own agency's website. On its "Causes of Climate Change" page, the EPA puts it this way: "Carbon dioxide is the primary greenhouse gas that is contributing to recent climate change." There's not a whole lot of uncertainty there to work with.

The choice of Pruitt to head the EPA never made any kind of sense to those who accept climate change as a human-caused reality. His own words and actions seem to reveal a man more committed to oil and gas companies than protecting the environment.