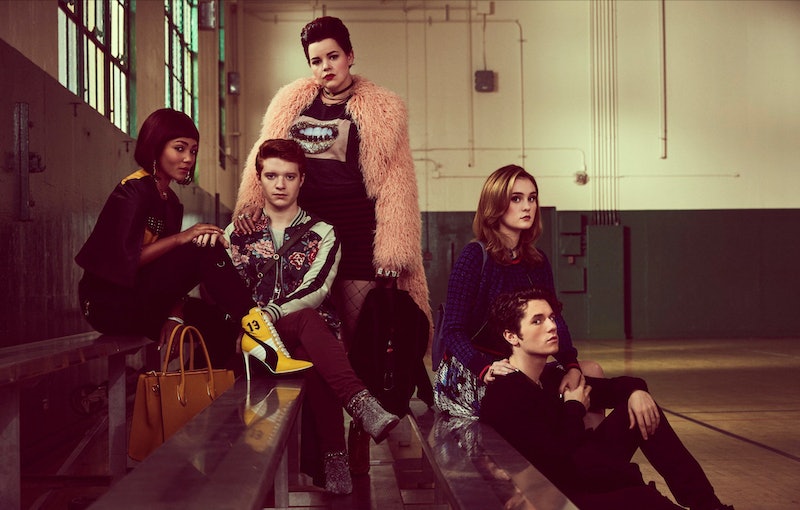 Spoilers ahead for the Heathers Season 1 finale, and for the movie. The Heathers TV adaptation was faced with an uphill battle from the beginning. After it hit delays, the controversial series struggled to find a home on a network or streaming service, and when it finally aired in a modified version on the Paramount Network, critics weren't too thrilled. One of the many choices that will have viewers scratching their heads is the way the Heathers reboot finale is different from the movie on which it's based — it feels woefully unfinished, and in reality, it's because it is.

The season concludes with an artsy montage that feels as though it's leading to an intense final scene. Protagonist (if there is such a thing in this show) Veronica, her twisted ex-boyfriend J.D., and her frenemy Heather Chandler are en route to their school's prom in separate limos, and over their resigned stares, a poppy beat plays. Then it cuts to shots of the high school's basement, where J.D. has rigged explosives to detonate in one hour, killing attendees of the dance. And then, as uncertainty looms, the end credits roll.

This cuts the violence short, whereas in the 1988 film, things reach a concrete conclusion. Veronica (Winona Ryder) thwarts J.D.'s (Christian Slater) plans to blow up their school during a pep rally — he eventually detonates a personal bomb, killing himself outside the school but failing to take the other students' lives.

When I watched the final hour of the new iteration of Heathers, I truly thought I'd misread something, and that there were more episodes following it in the season that I just hadn't been able to locate on the Paramount website. But alas, the ninth episode was its final goodbye for now. Episode 9 obviously holds better standing as a penultimate hour than a season finale, and it makes sense, given that's exactly what it was supposed to be.

According to The Hollywood Reporter, the season was originally supposed to be a full 10 episodes, but following controversy surrounding its subject matter, an entire episode was cut. THR reports that Paramount delayed a March debut of the series after the deadly school shooting in Parkland, Florida, which left 17 people dead, and initially scrapped the project altogether in June. It was only brought it back to air after a series of significant edits.

"I am beyond excited that American audiences will finally get to see Heathers. Obviously, I wish fans could see the 10th episode, but the producers and I felt strongly about not changing anything in it, and so, it’s been considered too controversial for U.S. audiences," showrunner Jason Micallef said, per the outlet. "Still, every day at this job is a delightful dream, so it’s hard to complain. Plus, what matters most is fans will now get to see the satire we all love so much."

It's unclear if the full version will ever reach American audiences — the show was also set to air elsewhere internationally — but its future certainly can't be promised. Critics have been skeptical of the show from the start, and after episodes became available, some less-than-favorable reviews rolled in.

Daniel Fienberg for The Hollywood Reporter wrote in his review that “Paramount Network's TV take on Heathers is a one-note disappointment, taking certain surface-level detours from the movie and adding precious little scathing insight of its own.” SlashFilm's Lindsay Romain called the first five episodes made available to critics "very watchable," but called into question multiple aspects of its storytelling, including how flimsy its tropes can feel in today's climate. "It’s hard to shake just how poorly the show lands when, in real life, teenagers are saving the world instead of making it this petty and ridiculous," she wrote, linking to a feature on Parkland student and activist Emma González.

Heathers, the movie, was a cult classic — a dark comedy that you can still stream today, and one that lent itself to plenty of iconic Winona Ryder moments. But it also was released pre-Columbine. In today's society, in which teenagers have to fight to be taken seriously, and constantly have the dangers of an active shooter lingering in the backs of their minds when they go to school, maybe Heathers is one piece of pop culture that should be left in its original format, and understood as a product of its own time, instead of being repackaged as a tone deaf and cheeky reboot.