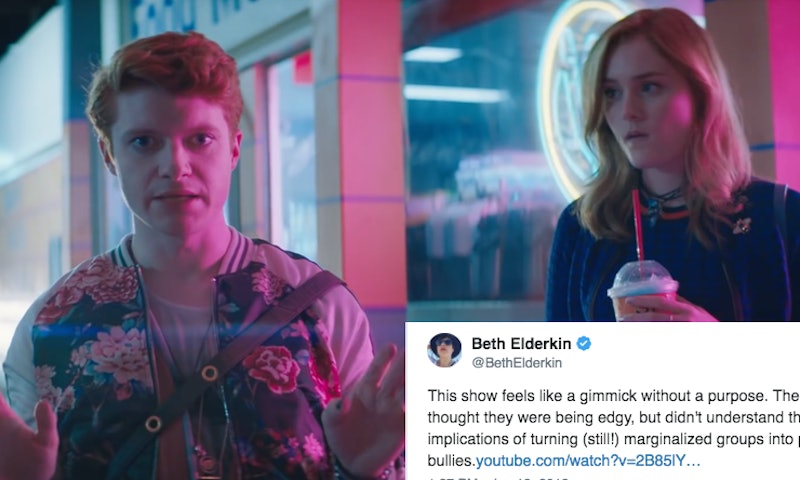 Heather, my love, there's a new reboot in town. Paramount released a new trailer for Heathers, the forthcoming TV show based on the cult-classic movie of the same name. Chatter bubbled up around this reboot when its existence was first announced — and with good reason. The original Heathers ruler, Shannen “Heather Duke” Doherty, has a recurring role; Selma Blair has a recurring role; underrepresented communities are represented on the series; and, as show creator Jason Micallef said at the 2018 Winter TCAs, it aims to be “dark” and “edgy.” However, some reactions to the latest promo have been about as warm as a freshly poured slushie.

Are there any funny lines in the trailer? Sure. Does it look like an incredibly macabre TV program? Duh. However, the preview’s handling of certain themes did not sit right with some viewers. Yeah, the show is based on a movie that is anything but politically correct, but the new trailer has rubbed a lot of people the wrong way.

As previously reported, this generation’s Heathers are all members of marginalized groups: One is genderqueer, another is plus-sized, and the third is a person of color. It's an update that, on paper, sounds great; representation in media is incredibly crucial. However, here's where things get complicated: The target of the Heathers’ wrath is a straight white girl. And the straight white girl’s straight white boyfriend appears to be a serial killer.

In a new interview with Entertainment Weekly, showrunner Jason Micallef addressed the criticism of the reboot, specifically regarding the titular characters. “The main thing to really take away is I don’t view the Heathers as the villains," he told the magazine. "The three Heathers are incredibly powerful and ruling the school; they’re the people you would want to be." He continued,

Micallef explained that he changed the Heathers' surface identities because he believes "today [the characterization] rings true. People that wouldn’t have necessarily been considered the most popular kids in school in 1988 could very well be — and probably most likely are — the more popular kids today." He also pointed out that due to the format of the medium, they have "so much more time to explore their characters and get behind it."

"Of course, no one’s seen the show yet," he added. "Once they see it, I think they’ll get what we’re talking about."

Well, until the Heathers reboot premieres on March 7, the NSFW trailer (and all of its intentionally offensive jokes) will just have to do.

Here are some of Twitter's disapproving responses to the preview.

Some Are Not Having It

Here's An Excellent Use Of This GIF

Some Believe It Should Stay In The '80s

The trailer really does have some tough moments.

Some Were Not On Board From The Beginning

The emojis are worth a thousand words.

Some Couldn't Get Through The Preview

And Some Decided They Will Not Be Watching The Series

Seriously Though, It Didn't Go Over Well

Yeah, the showrunner says the Heathers aren't the "bad guys," but uh, judging from the trailer... they kinda look like the "bad guys."