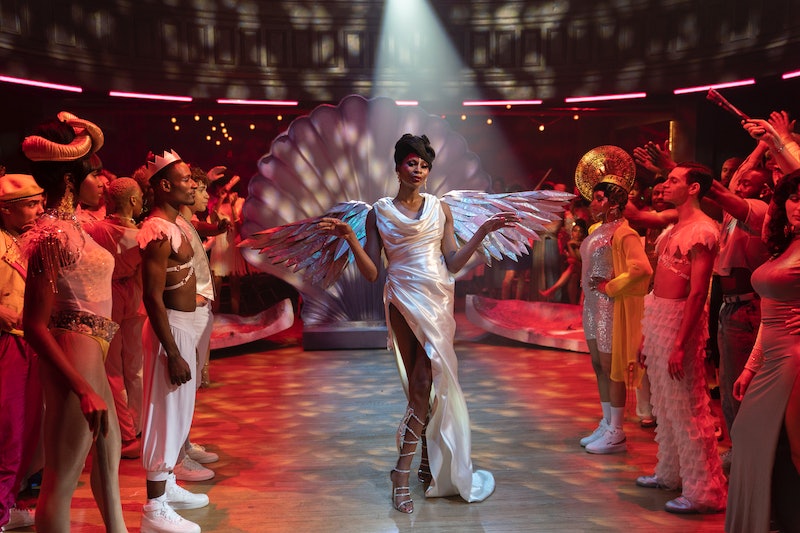 As the Daily Xtra reported, the Hellfire Club really existed in New York City in the '80s before most of the sex clubs were closed and the Meatpacking District was cleaned up. So beyond giving insight into her character motivations this season of Pose, Elektra's new career also highlights a real part of New York City history.

Efrain John Gonzalez is a photographer, sex historian, and former taxi driver who spoke to Daily Xtra about the sex clubs of New York City. He discovered the Hellfire Club in 1982 and frequented it until 2002. "If you came there, you were basically accepted," Gonzalez said about the diverse gender identities of the clientele. And while many sex clubs closed during the HIV/AIDS epidemic, Gonzalez said the Hellfire Club evolved by removing back rooms and lived on as the Vault.

The blog Jeremiah's Vanishing New York reported how Lenny Waller was the manager of the Hellfire, the Vault, the Manhole, and a number of other S&M clubs. (Waller told the blog in 2008 how the Hellfire opened in 1978 but had a couple of iterations before that.) Through his company Hellfire Press, Gonzalez created the NSFW book Lenny Waller: A Life Underground, which highlights photos from the establishments that Waller managed — including the Hellfire.

Elektra loves her new job in "Worth It," saying, "I can't believe I've finally found a career that truly fits me." And to be accepted for who she is and be in control (as dominatrixes have shared in op-eds before) must be empowering. But she's also turning away from the people who have been there for her during hard times before, like Blanca and Candy. She's so focused on getting what she wants and being revered at the balls (with her new House Wintour), that she has entered this potentially high-risk lifestyle.

Elektra's new job has her feeling full of confidence and pride like she was at the outset of Pose. But when she acts superior, she alienates the people in her life. So she leaves House Ferocity after only just leaving House Evangelista in the previous episode to establish her own home, named after Vogue editor-in-chief Anna Wintour. And while her new house looks poised to win at the balls, Elektra might just learn the hard way that winning isn't always everything.

While these controversial sex clubs were a haven for many in New York City up until the 1990s, it might not be good news for Elektra down the line (as the Season 2 "still to come" trailer hinted at). But hopefully for Elektra, the family members she has turned her back on will still be there for her when she really needs them.