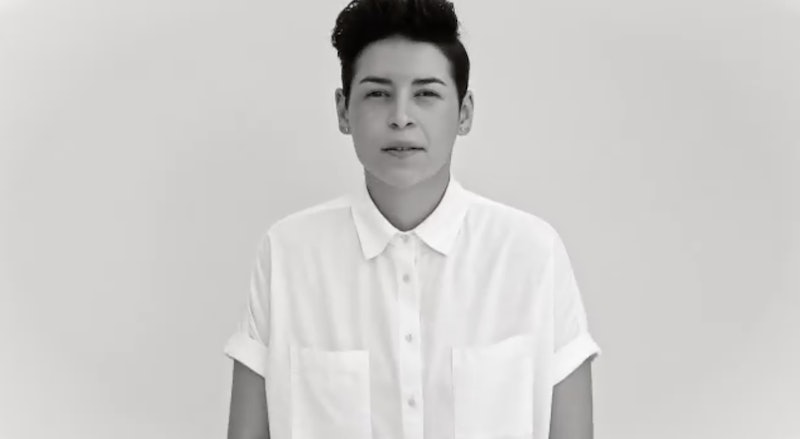 The 2018 Academy Awards have million of eyes on them, so it's the perfect place to showcase a new platform, product, or trailer. This year, Twitter unveiled its #HereWeAre campaign, which, in the words of Twitter, shows how they "stand with women around the world to make their voices heard and their presence known. To bring them front and center, today and every day." In a year filled with the Time's Up and #MeToo movements, Twitter's #HereWeAre message during the Oscars couldn't be more poignant.

According to a Twitter press release, this is its biggest single advertising spot buy ever, and, considering that the Oscars are always an oft-tweeted night, it's money probably well spent. It centers on the #HereWeAre hashtag, which was borne from Twitter CMO Leslie Berland's time spent lamenting the lack of women speakers at the Consumer Electronics Show (CES) last year. The tweet she sent went viral, not just in the tech industry but around the world. Case in point? Ava DuVernay, Issa Rae, and Julie Dash have embraced the mantra, and they appear in the ad spot, too. The minute-long commercial features a poem by poet Denice Frohman to underline the movement.

The poem in the video reads as follows:

Then every word out her mouth a riot

Say beautiful and point to the map of your body

Say hero and cast yourself in the lead role

When a girl pronounces her own name, there is glory

When a woman tells her own story, she lives forever

If this poem is the only thing that survives me, tell them this is how I happened

Tell them I built me a throne

Tell them when we discovered life on another planet, it was a woman

And she built a bridge, not a border

I heard this is how you make history

This is how you create a new world

According to Twitter, there has been a 50 percent increase in talks around women's rights in just the last six months, and this moving commercial seeks to amplify that, to add meaningful dialogue to a conversation that's been worth having for decades. That said, even though Twitter's campaign is meaningful, it doesn't mean that Twitter is without its faults.

Following the launch of the campaign video, many users took to Twitter to express that, although they were happy about Twitter's new dedication to amplifying women's stories, they think the actual platform could do better to protect women and minorities, who face trolls and doxxing (that is, revealing an online person's real-life address, name, and more to the public) when they speak their mind on Twitter.

This isn't a new critique of Twitter. In fact, the problem of harassment is so bad on Twitter that Jack Dorsey, the company's CEO recently asked users for help in solving the problem.

Another issue with #HereWeAre? Actress Amber Tamblyn brought up a great point — why didn't Twitter say the name of the poet who gave the words to the commercial?

Denice Frohman is reading her own poem (she's the first person you see in the video), but a little credit where credit is due would have been nice.

All in all, Twitter's biggest commercial ever did well in messaging, if not execution — but for Twitter to really put its money where its mouth is, the site needs to rectify its many problems so that the women whose stories they want to share on the platform actually feel safe and respected while doing so.

More like this
Twitter Is At Odds Over Taylor Swift’s Possible ‘All Too Well’ Oscar Run
By Brad Witter
A Full Debrief Of Who Follows Who From Love Island – & Who Doesn’t
By Shahed Ezaydi
Kathy Hilton Tried To Explain Why She Misidentified Lizzo As Precious On Live TV
By Jake Viswanath
The Sean Bean Intimacy Coordinator Controversy, Explained
By Sam Ramsden
Get Even More From Bustle — Sign Up For The Newsletter