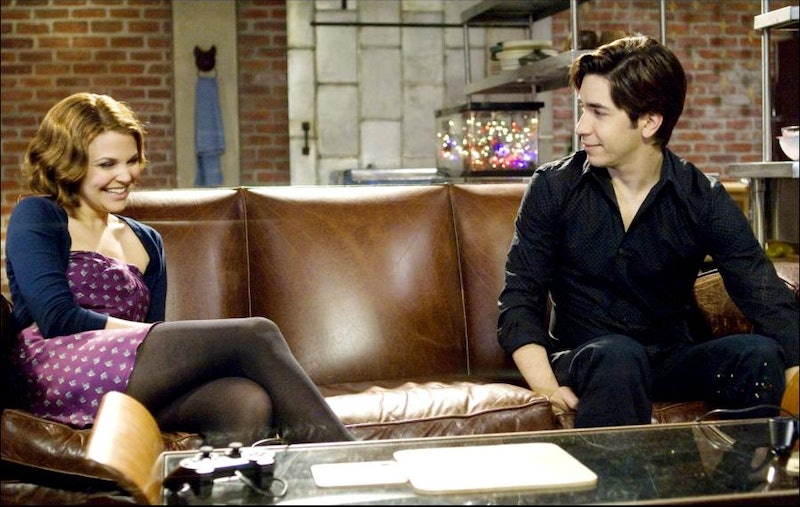 When He’s Just Not That Into You hit theaters in 2009, it was the first of many big-budget, star-studded romantic comedies to be released in the years to come. Yet while audiences enjoyed Valentine’s Day, Mother’s Day, and New Year’s Eve, He’s Just Not That Into You stands out, due to its dating advice. The movie tackled topics like social media, texting, and the Sex And The City-fueled notion that if a man (the movie is strictly heterosexual) isn’t calling, you should move on — he is just not all that into you. But 10 years later, does any of the film's advice still ring true?

More than you'd think, actually. He’s Just Not That Into You, based on the 2004 book of the same name by Greg Behrendt and Liz Tuccillo, is a manifesto for women to take ownership of their relationships and stop waiting for guys that won’t call. It starred a pre-Batman Ben Affleck, a pre-A Star Is Born Bradley Cooper, Drew Barrymore, and three Jennifers — Aniston, Goodwin, and Connolly, among others. Their characters' stories are told as either warnings or aspirational tales, and while not every couple winds up happily ever after, that’s OK! In fact, the movie makes it clear that being alone is better than being a bad relationship. And that's not the only good advice the film provides — take a look at these other words of wisdom that hold true 10 years later.

You Can’t Force Yourself Into A Relationship

Scarlett Johansson’s character is really into Bradley Cooper’s character, but he’s married. So instead, she tries to make it work with Kevin Connolly's character, but she is really just not that into him. Ultimately, she realizes that this isn’t a thing she can do — both for herself and to Kevin Connolly — and she breaks it off. This is still great advice today, because being with someone just because you think you should is bad for the both of you. It’s dishonest, and you’re preventing you and this partner from finding better relationships down the road.

Stop Throwing Yourself At Every Person Who Shows Interest

Yes, a million times yes. Ginnifer Goodwin’s character is trying to marry any dude that asks her for a tissue, but as Justin Long's character tells her, she's not being good to herself. His advice is solid — love yourself first, stop worrying about everyone else, and be happy where you’re at. When you can be happy there, well, something might come along. Don’t issue value via relationships.

Ultimatums Are Not The Answer

Jennifer Aniston’s character wants to get married, and Ben Affleck’s doesn’t. He is a wonderful partner and all that jazz, but he doesn’t want that piece of paper. Why? He thinks that marriage ruins lives, and given that Bradley Cooper is his BFF here, well, he doesn’t have a great peer partnership to look to. So because she gives him an ultimatum, Jen and Ben split, her dad has a heart attack, and she realizes she can’t live without him. It all should have been solved with therapy and discussion, though, not ultimatums, because making grand declarations isn’t about a partnership — it’s all about you.

Stay Away From Cheaters

This is always good advice. Bradley Cooper conducts an emotional and eventually physical affair with Scarlett Johansson because he’s afraid of telling his wife, Jennifer Connolly, how trapped he feels in their marriage. Come on, dude. People who cheat and lie don't deserve your attention, and this will be true long after we are all dead and the robots have taken over.

Put Down The Phones & Talk Already

Drew Barrymore’s character falls into Cathy-esque fits of “MySpace! Texting! Help!” because she has so many different channels in which to meet men. It’s overwhelming, and she eventually finds a guy she likes when she talks to him face-to-face. In 2019, online dating is huge, and it’s how a lot of people find relationships and hookups. As such, the advice to abandon the Internet doesn't hold up, but the advice to, once you find someone, talk face to face? It will always be true. Real connections aren’t formed without some person-to-person contact.

Dating and relationships have changed a lot in the past 10 years, but the basic tenets of love, as demonstrated in He's Just Not That Into You, haven’t. Love yourself, wait for the right one, and don’t cheat on your partner. OK? Good.