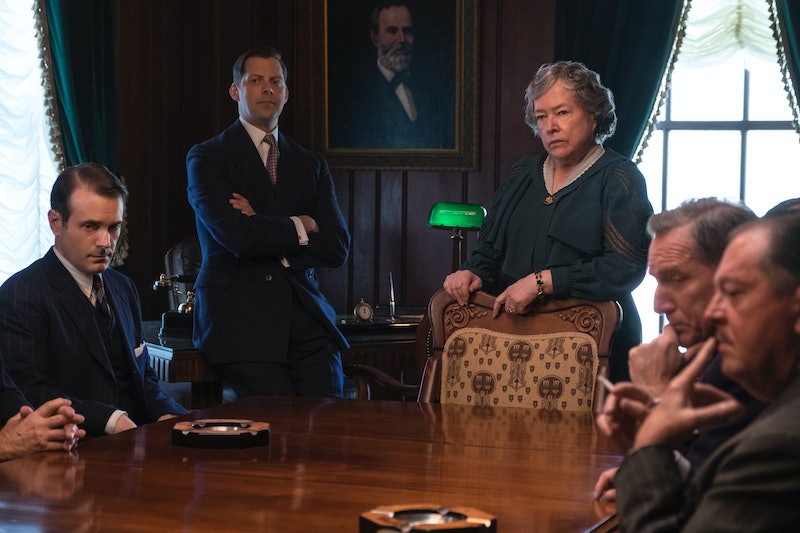 The true tale of the infamous criminal couple Bonnie Parker and Clyde Champion Barrow has been told by media time and again, most famously in the form of the classic 1967 film, a Broadway musical, a TV mini series — but it's never been told like this. While a lot of media romanticizes the story of the duo's heists and their juicy love affair, Netflix's The Highwaymen, out Mar. 29, doesn't fall for the "Robin Hood" gangster myth, taking a very different approach to portraying the criminals. The film tells the story of former Texas Rangers Frank Hamer (Kevin Costner) and Maney Gault (Woody Harrelson), the men who went out of retirement to go on a mission to stop Bonnie and Clyde. And, yes, this is all based on a true story.

Bonnie and Clyde are not the heroes of The Highwaymen. While some movies, TV shows, and even songs (like Beyoncé and Jay Z's 2003 collab "Bonnie and Clyde") paint them as this dream partnership, overlooking the fact that, per the FBI, they committed armed robberies and murder. The iconic Bonnie and Clyde movie, starring Warren Beatty and Faye Dunaway, even made Hamer (Denver Pyle) out to be the villain. "The portrayal of Frank Hamer in the 1967 film was beyond inaccurate. It was unjust," The Highwaymen screenwriter John Fusco told USA Today. "Frank Hamer was not the mustache-twirling evil buffoon portrayed in Bonnie and Clyde. He was arguably the greatest law officer of the 20th century."

Jody Edward Ginn, an official historian for the Former Texas Rangers Association, told USA Today in the same piece, "The portrayal devastated the family; 'humiliated' is the word [his wife] uses often in court documents. The most respected lawman in Texan was made out to be a buffoonish villain."

And so Fusco, who started the project, "spent years tracking down the iconic lawman Hamer to tell his story," per Deadline, and went as far as to talk to his son Frank Hamer Jr. to straighten out the historically inaccurate narrative about his father. So this John Lee Hancock-directed film has been 15 years in the making. Actors Paul Newman and Robert Redford were the first ones up for the two lead roles of Hamer and Gault, but then Newman's health began to decline, and he passed away in 2008, long before Netflix picked up the movie.

The Highwaymen emphasizes the real-life devastation caused by Parker and Barrow's seemingly endless crime spree, and shows Hamer as the leader of a crusade to put an end to the madness — with his old friend, ex-partner and fellow retired Texas Ranger Gault by his side, of course. It's an "old cowboys vs. 1930's gangsters" situation, so it's clearly action-packed, and a lot of guns are definitely involved.

"It was the life he lived, and Frank Hamer saw it as his duty. And guys like that want one last ride," Costner told USA Today. "And he’s looking at these kids on a killing spree with no one bringing them down. He’s tired of reading about it. When he’s asked to go, he goes."

We all (or, at least, many of us) know how the story ends: Bonnie and Clyde die via open fire from a number of policemen and two Texas Rangers. That isn't a surprise. But The Highwaymen isn't about that ending, but about exploring the untold story of the long and difficult journey, and the old-school tactics and cleverness it took to take the duo and their gang down.