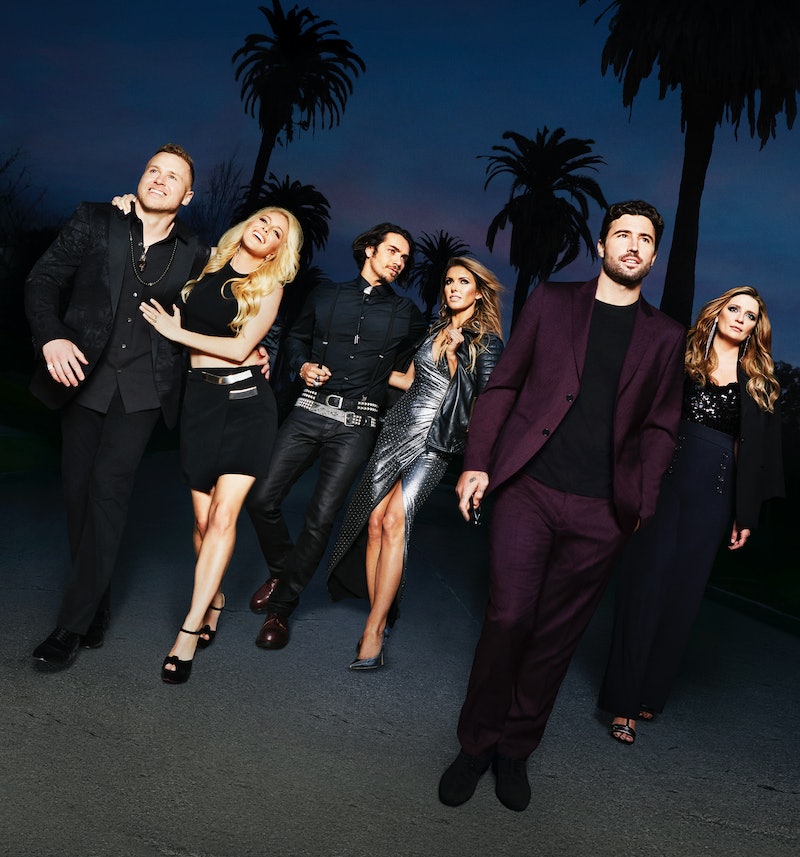 The mid-2000s are back, and now, so is The Hills. The beloved MTV reality show returns Monday, June 24, with an updated name, The Hills: New Beginnings. Most of your favorite cast members are also coming back, including Audrina Patridge, Brody Jenner, Whitney Port, Stephanie Pratt, and of course, Heidi and Spencer Pratt, as well as new(ish) faces Mischa Barton and Brandon Lee. In anticipation of the premiere, MTV released the show's opening sequence, and this Hills: New Beginnings sneak peek shows that Speidi won't be the villains this time around.

The new teaser catches viewers up on everyone’s lives, and even though everyone has changed since the original series ended in 2010, it seems that the Hollywood Hills have not. "When you’re in The Hills, pretty matters," Audrina teases in a voiceover. "You’re absolutely judged by what you wear, how you look, everything you do."

That said, there are some major differences, specifically when it comes to Spencer and Heidi. Perhaps the award for largest growth as human beings should go to Speidi, who seem to have mellowed out as a couple, welcoming a new baby, Gunner Stone, who appears in the opening of the premiere. “I knew Spencer was my soulmate the night I met him,” Heidi says in the sneak peek. The two left The Hills as pretty well-established villains, but by the looks of this clip, they're entering The Hills: New Beginnings as the most stable couple in the bunch.

However, that doesn’t mean that the infamous couple doesn’t get embroiled in the drama (it’s Heidi and Spencer, what do you expect?), and a lot of the squabbles are within the family. “I’m your family,” Spencer’s sister Stephanie screams to him at one point, before he coldly rebuttals, “You’re not my family. You’re the most self-centered human ever.” Talk about a family feud.

And Spencer isn’t the only person Stephanie clashes with this season. “The last thing I’m going to allow here is my f*cking name to be disgraced," she says in the teaser. In fact, she just might be the villain of the new show, especially where Audrina is concerned. One scene in the sneak peek shows Audrina telling Stephanie that she's “literally insane” after Stephanie threatens to destroy her — while wearing a plastic tiara, because that’s how great villains roll.

Stephanie doesn't seem to mind filling the villain role on The Hills reboot though. “If I’m the villain, it’s just because I don’t give a f*ck about all your bullsh*t,” she said in a recent interview, attributing her no-nonsense attitude to her living in London for the past few years. Truer words have never been spoken.

Meanwhile, Audrina has been dealing with her own family issues. “It’s hard enough going through a divorce," she explains. "It’s harder everyone judging and knowing intimate details that you don’t want everyone to know." However, some familiar faces are back to cheer her up. She reunited with Justin Bobby, who she's hadn't seen in "so long." Will sparks fly again? Who knows.

Finally, the new teaser gives us a look at the cast members new to the franchise, Mischa Barton, queen of The O.C., and Brandon Lee, son of Pamela Anderson and Tommy Lee. Lee has apparently been friends with Brody for years (despite the fact that he's only 23 years old), making him a natural fit with the OG gang. As for Mischa, the star is determined to make a good name for herself once again in the public eye.

“When you’re famous, people have a price tag on your head," she says. "A lot of people that I trusted turned out to be monsters.” Does Mischa know that she's entering The Hills? It's only a matter of time before everyone's monstrous tendencies come out. Watch your back, Marissa.