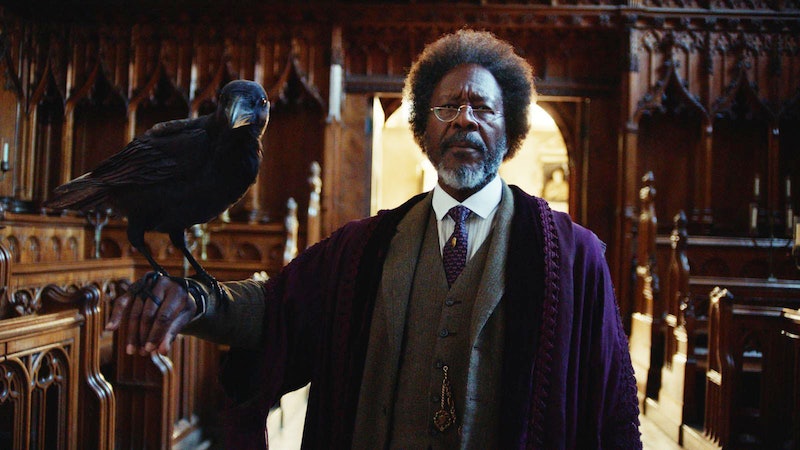 BBC One's latest adaptation is set to reimagine Philip Pullman's thrilling novel series, His Dark Materials. The TV adaptation will first follow the events of the trilogy's first book Northern Lights, however, details of the show's exact plot have been kept somewhat under-wraps. So, if you're itching to find out more about the novels on which the new series is based, the His Dark Materials book ending will get you seriously excited for the BBC's latest drama.

Some major spoilers lie ahead, so if you'd prefer to watch the story play out on TV, you should probably look away now.

According to study guide website SparkNotes, the conclusion of Northern Lights centres around the characters of Lyra Belacqua, Roger Parslow, and Lord Asriel, the latter of whom hopes to break into another world by releasing a mass of energy — which he believes can be achieved by severing Roger from his daemon. Lord Asriel's prediction turns out to be correct, and an enormous mass of energy tears a hole in the Northern Lights, forming a bridge to a parallel universe. However, after being severed from his daemon, Roger is killed, and Lyra goes forth to follow Lord Asriel into the new world. Now, it's unclear if the television adaptation will stay true to the original novels, so we'll just have to wait and see. However, the original ending perfectly sets up the next chapter, so fingers crossed the BBC drama doesn't deviate too much away from Pullman's story.

As the Radio Times reports, His Dark Materials begins on Sunday, November 3 at 8 p.m. on BBC One, however, those unfamiliar with the original books might be hoping for a quick rundown before the new series gets underway, and if so, you've come to the right place. As mentioned previously, the TV adaptation is based on Philip Pullman's novel series of the same name, and consists of three novels titled Northern Lights, The Subtle Knife and The Amber Spyglass. The story initially begins in Oxford, and is set within a pre-industrial parallel universe in which people are accompanied by their very own daemons — a physical manifestation of a person's soul, which exists in the form of an animal.

According to iNews, this thrilling tale is backed up by an almighty cast, which includes the likes of Shameless star James McAvoy, Braveheart's Farder Coram, Broadway superstar Lin-Manuel Miranda, and X-Men's Dafne Keen. The small screen adaptation of His Dark Materials begins on Sunday, November 3 on BBC One, and I don't know about you, but I cannot wait for this trilogy's first chapter to unfold.

More like this
Everything To Know About The 'Daisy Jones & The Six' TV Series
By Maxine Harrison and Brad Witter
The Banned 'Friends' Ad Shows Monica As You’ve Never Seen Her Before
By Sam Ramsden
Con O'Neill Was Connected With Sarah Lancashire Long Before 'Happy Valley'
By El Hunt
'The Catch' Revisits A Famed Irish Filming Spot From 'The Tudors'
By Darshita Goyal
Get The Very Best Of Bustle/UK
Sign up for Bustle UK's twice-weekly newsletter, featuring the latest must-watch TV, moving personal stories, and expert advice on the hottest viral buys.