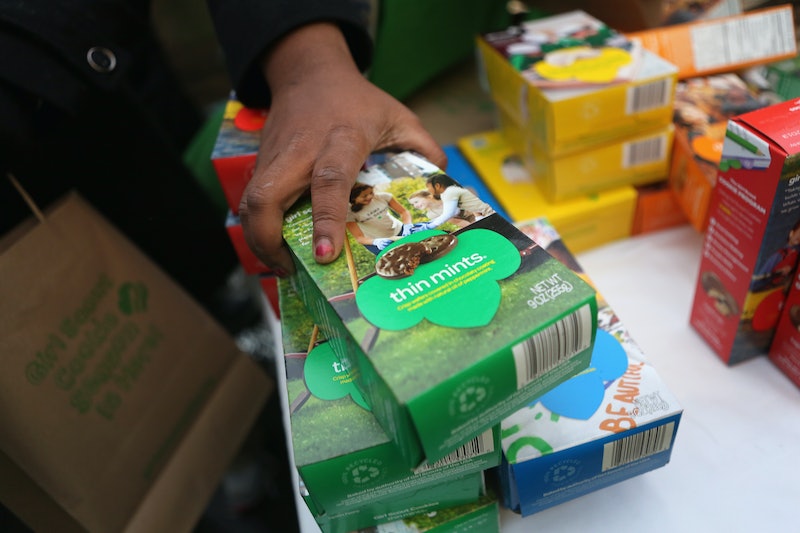 Whether you crave a crisp Thin Mint, some toasty coconut Samoas, or creamy Peanut Butter Patties, Girl Scout cookies are an iconic commodity. Between January and April, these sweets go on sale for a limited time, but the history of Girl Scout cookies dates back a lot further than you might think; in fact, this year the famous entrepreneurial initiative celebrates its 100th birthday! These special cookies aren't just tasty; they are a hallmark of ingenuity, competition, and empowerment for girls and women everywhere. So next time you stock your freezer with these crunchy confections, you can feel pretty good about yourself for doing so.

While you can still spot girls in their badge-covered vests skipping down the street today, the very first Girl Scouts troop gathering was held over a century ago in March of 1912. Juliette Gordon Low, inspired by the founding of the Boy Scouts that same year, decided to start a similar program in Georgia where girls of all backgrounds would have "a place to grow and develop their leadership skills." Five years later, the Mistletoe Troop in Muskogee, OK came up with the idea to bake cookies at their homes (with help from their parents) and sell them in the local high school cafeteria in order to raise money for their troop's activities. The brilliant fundraising idea quickly caught on and soon troops around the country held cookie-centric bake sales, showing off their own delightful recipes.

The first official Girl Scout cookie recipe was published in 1922 in The American Girl magazine. The cost of ingredients for the original sugar cookie recipe was estimated at 26 to 36 cents for six or seven dozen cookies, but a dozen cookies could be sold for as much as 25 to 30 cents. The recipe was meant to help fellow Girl Scouts "maximize their returns"; however, many troops continued selling their own family recipes door to door.

About a decade later, the first official "Girl Scout Cookies" were sold by the Philadelphia Council. In 1933, a package of 44 cookies retailed for only 23 cents (today they go for around $5 a box). In 1936, unable to fill the demands for cookies from their own kitchens, the Girl Scouts organization switched to commercial bakers. Due to a shortages of key baking ingredients during World War II, the Girl Scouts were forced to move away from cookies, and sold war bonds and calendars instead.

In the '50s, Girl Scout cookies expanded their selling ground, adding booths in shopping malls to their door to door drill. Thin Mints made their debut in 1959, joining chocolate and vanilla sandwich cookies and a buttery shortbread confection. In the mid-'60, the peanut butter sandwich cookie (also known as the Do-Si-Do) became a top seller, and the Samoa/Caramel deLite was added in 1975.

Long gone are the days of girls making their own cookies and wrapping them in wax paper. Today, the cookies are manufactured by two licensed bakers: ABC Smart Cookies and Little Brownie Bakers. The two bakers use different names and recipes for each type of cookie — so if you've even been confused as to why certain cookies have two names, that's why!

To find out where and when you can buy Girl Scout cookies, simply enter your zip code in the "Find Cookies!" tab, those who want the cookies delivered directly to their house can even buy them online here, thanks to the Digital Cookie Platform — provided it's your local council's cookie season, of course. Yum!