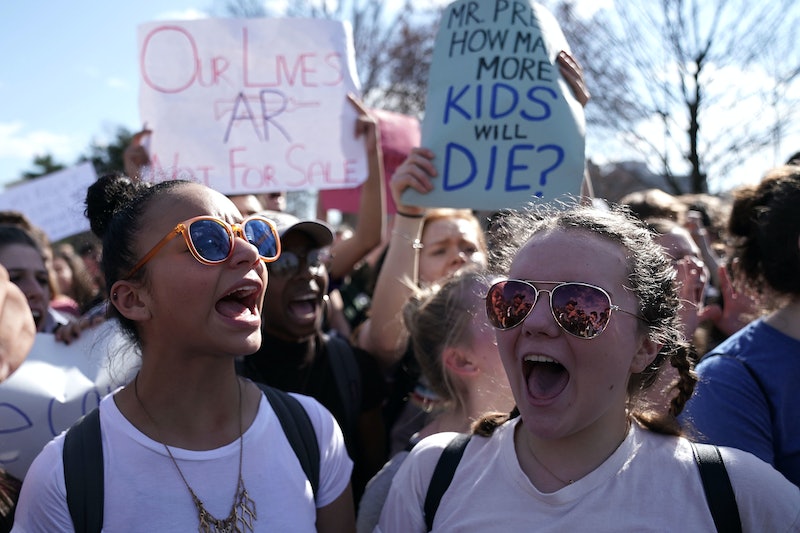 When students across the nation walked out of their classrooms Wednesday, they joined a tradition of youth activism that stretches back decades. But these students' National School Walkout Day is different than the rest because of one crucial thing many protesting students didn't have in the past: social media.

It's impossible to know how the impact of past movements might have been different, had Facebook, Twitter, et. al., had been available back in the '60s and '70s as youth advocacy started to take off in the United States. But if the Parkland teens are any indication, the power of immediate connectivity can amplify a grassroots social message faster — and farther — than most previous eras could probably have imagined.

Speaking with education website The 74, Frank LoMonte, an "expert on students' First Amendment rights" who heads up the Brechner Center for Freedom of Information, called social media "the great leveler."

The Parkland students' use of social media in the immediate aftermath of the shooting at Marjory Stoneman Douglas High has been noted many times already. Teens already well-versed in the lingo of Twitter were able to parlay that knowledge into pithy tweets about gun violence and gun reform. Several of those early messages easily went viral, especially when paired beside tweets from older, less slang-savvy adults.

But the walkout on Wednesday was the first major national event (organized by the Women's March Youth Empower) to protest gun violence this year. It will be followed on March 24 with the Parkland-student led March for Our Lives in Washington, D.C. And the use of social media — not just by the Parkland teens alone, but young people nationwide — has the potential to flood Twitter, Facebook, YouTube, Periscope, etc., with images and messages from kids' own voices, unedited and uncensored.

That sort of reach was not available to the advocates of most hallmark youth movements throughout history. Another crucial way the limitless reach of social media could amplify National School Walkout Day is in its potential to dissuade excessive punishment for participating teens.

Discipline was a major concern for countless students who wanted to voice their support for gun control legislation, but were worried their schools might retaliate against them with official school discipline. Given its political nature and pointed interruption of class time, the National School Walkout is the type of demonstration many schools have historically tried to avert.

And while it is true that young people's freedom of speech doesn't end once they step on campus, it's also true that schools are within in their rights to administer punishment for students who break the rules.

The Supreme Court ruled in Tinker v. Des Moines that students do have a right to free speech. That 1969 landmark case resolved a debate set off four years earlier by then-13-year-old Mary Beth Tinker. The junior high student wore a black armband to school in protest of the Vietnam War, and the school responded by sending her home. Several months later, the ACLU (American Civil Liberties Union) took up Tinker's case. They went on to win their argument before the Supreme Court, that students don't "shed their constitutional rights to freedom of speech or expression at the schoolhouse gate."

But schools can follow through on disciplinary action for intentional rule-breaking. And as everyone who is a once or current student knows, cutting class is almost always a no-no.

In a preemptive move to address such concerns, several colleges and universities went on Twitter themselves — to assure young prospective students that walking out would not be held against them in the application process.

And social media has already put pressure on schools that are threatening excessively punitive measures against walkout participants. After a school district near Houston, Texas issued a warning that students would receive a three-day suspension if they walked out, Twitter users made the local story a national one. And the ACLU is already asking students on Twitter to pass on how their schools are responding to the walkout.

Social media gave young people an unfettered voice during the National School Walkout. It's also helped to ensure that many students get to participate in the first place.