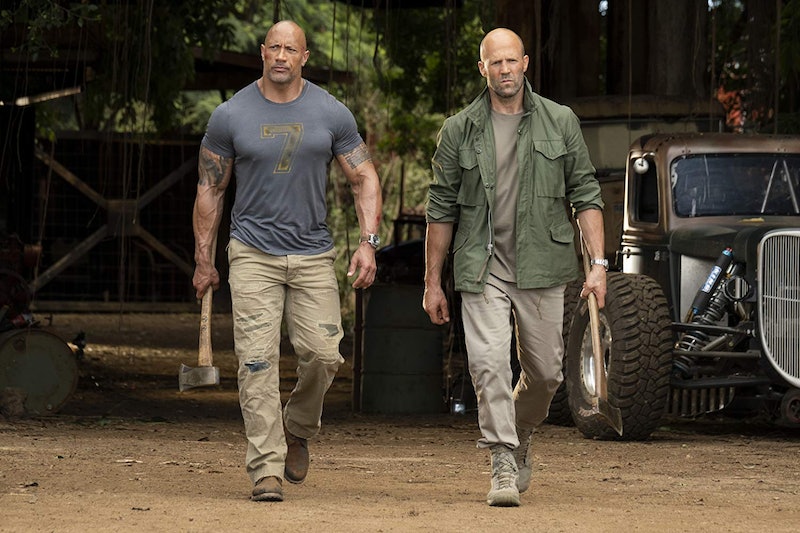 Major spoilers ahead. The Fast & Furious film franchise is expanding with its first spinoff movie, Hobbs & Shaw, starring Dwayne Johnson and Jason Statham as the bickering pair. And it seems that this movie is starting an offshoot mini-franchise of its own. The Hobbs & Shaw post-credits scenes are many, and hint at what a sequel would entail — possibly including an expanded role for its surprise guest star.

It's a huge reveal when Ryan Reynolds shows up as CIA Agent Locke, who purports to be Hobb's "best friend" and brings him in on a mission involving Hattie Shaw (Vanessa Kirby), an MI6 agent who the CIA believes stole a virus that could wipe out humankind. (It had previously been rumored that Reynolds would appear, especially since Hobbs & Shaw director David Leitch also helmed Deadpool 2.) What Hobbs doesn't know at first is that Hattie is the sister of his rival Deckard Shaw and that she only injected the virus into herself to prevent it from getting into the hands of superhuman cyborg Brixton (Idris Elba) and the evil organization that created him, Eteon.

In the end, of course, Hobbs and Shaw are able to set aside their differences for the greater good. Still, in the mid-credits scene we see that their cheeky rivalry hasn't completely died out. Hobbs, as payback for a prank Shaw pulls on him, calls the cops on him when he's back home in the U.K. As he and Hattie break their mother Magdalene (Helen Mirren) out of jail at the very end of the film, the police may have something real they want to talk to him about.

Hobbs also receives a call from Locke about another viral problem — a call that continues over two more scenes, one after all of the credits are complete. The agent — who also looks to be injured, bloody, and running from something or someone — doesn't give too many details regarding the mission, but he says that the new problem at hand doesn't melt humans' insides like Snowflake, the virus they apparently turned over to the CIA after extracting it from Hattie and saving the world. This one, apparently, melts your "outsides."

But while Agent Locke seems innocent and ridiculous, there might be reason to be suspicious of him. When he first briefs Hobbs about the Brixton case, he says that the superhuman villain was able to stab a man with a brick — something that he described was physically impossible for an ordinary person to do. Well, by the post-credits scene, Locke is able to pull it off. This may suggest that Locke, like Brixton, is a superhuman soldier working for the bad guys.

The mysterious tech company seeks to "improve" the human race, with the first step being genocide. And while Elba's character is the head soldier leading operations, it's clear that he's taking orders from someone else. Eteon's head honcho's identity is never visually revealed, and the character's voice is also distorted beyond recognition when they speak... at least, for most of the time. But at some points, the voice-changing program seems to fail and the real voice behind it sounds a bit like Reynolds's.

So could Reynolds actually be the big bad behind Brixton's "Black Superman"? It could explain why such a huge star was brought in to cameo. Then again, Kevin Hart also appears as a helpful air marshal, so maybe being a fan of the franchise really is all there is to it. Either way, it seems like a given from these teasers that Hobbs and Shaw will be put on another case together soon, and hopefully Hattie too.