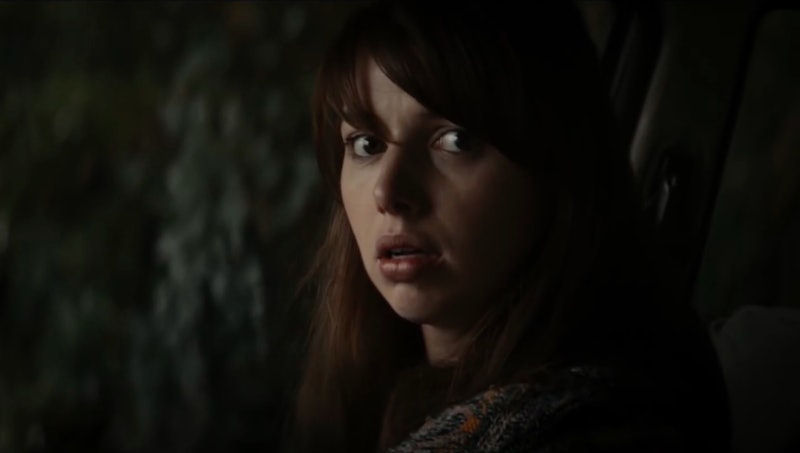 As the long, harsh reign of winter continues, it's important to remember that frost and snow aren't the only things creeping up on you. Nope, there are some pretty damn terrifying horror films in the mix too. And, y'all, just one look at the trailer for The Hole In The Ground will have you shivering.

Directed by Lee Cronin, The Hole In The Ground sees single mum Sarah (Seána Kerslake) take her son Chris (James Quinn Markey), who is a bit of a cheeky little guy but a good kid really, to go and live in the middle of nowhere. You know, a hard-working single mum trying to do the best for her kid, thinking that a childhood in the countryside might be a great thing for him. But is it a great thing? Well, in a stroke of some pretty bad luck, it seems that, in the forest behind the house, there is a something going on that isn't, erm, ideal.

This film is another reason to be put off living the good life in a rural town. Yes, you'll be close to nature, but looks like you'll also be close to a huge gaping hole that seeds all kinds of evil and terror. Well, that's the case in this tiny town at least.

OK, so it's not even a town, it is literally in the middle of nowhere. Yes, Sarah went and did the one thing that every horror-film fan and true-crime aficionado knows not to do: she moved to a secluded bloody house right next to a huge forest. Guys, just don't live in the forest. Awful things are always kicking off in the flipping forest.

Anyhow. In the trailer, it is all sunshine and rainbows. OK maybe not sunshine — this is Ireland, after all (I should know, I'm from there) — but the mother-son duo are happily playing in their big creepy house together. But suddenly the young lad runs off, with gay abandon, straight into the creepy AF forest. Honestly, kids these days. So, our dutiful mum Sarah runs to find him, and instead finds a huge cavernous sinkhole. Instantly thinking the worst — as you would — she screams for her little boy, and luckily he comes running to her. Or does he?

So, all is well and good... Just kidding. It is definitely not well and good. While out for a drive, Sarah waves hello to their new neighbour, who is an incredibly scary and dishevelled lady. And the neighbour's reaction to seeing them? To scream "he's not your boy" and then head butt the passenger-side window. I know right? So rude.

But this is just the the tip of the iceberg, and Sarah suddenly gets her hackles up, beginning to sense something is not quite right. Apart from her son's creepy behaviour, she also notices him doing stuff like eating bugs. And, y'all, the continued vitriol from the neighbours is pretty brutal, firmly in the "this is not your son" category.

This film was selected for the Sundance Film Festival, and demonstrates that Ireland's history of excellent and deliciously creepy storytelling remains strong.