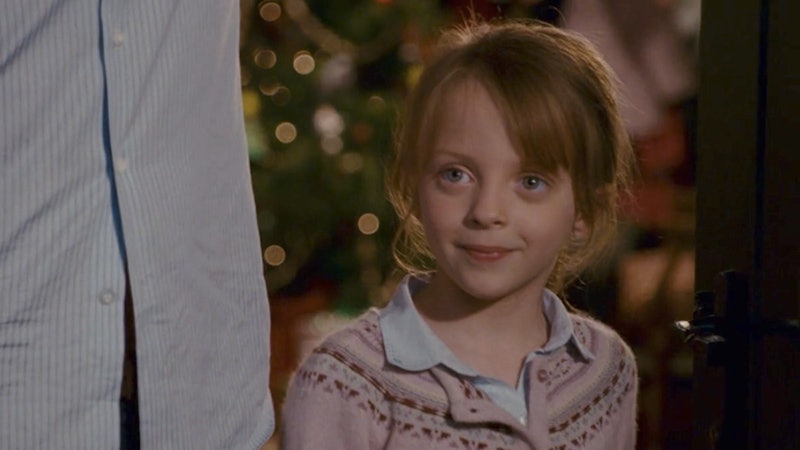 For those who keep The Holiday on repeat throughout the month of December, Miffy Englefield, a.k.a. Sophie, just gave you an early Christmas present. In a new interview with Vulture, Englefield revealed The Holiday scene that she improvised. Let's just say Mr. Napkin Head would be proud.

When Englefield made 2006's The Holiday with Jude Law and Cameron Diaz, she was just six years old. But, that didn't stop her from ad-libbing in the film. "So there’s a few lines and stuff in the film," Englefield told Vulture that she came up with on her own. "Like this bit in the Mr. Napkin Head scene, which everyone loves."

The moment Englefield is referring to just so happens to be one of the most notable lines in what is probably the movie's most famous scene. "There’s a bit when [Law is] getting the napkin on, and me and Cameron are just having a little chitchat," she said. "It was just complete improv — [director Nancy Meyers] wanted it to come across as natural as it could be. The direction she mostly gave us was, “What would you do in this situation?”

The very natural line Englefield threw away comes when Sophie is preparing Diaz's Amanda for the comic genius she is about to witness. “It’s so funny," Sophie says in the film. "You’ll fall off your chair it’s so funny." "That was completely improv, that was a onetime thing I said," Englefield told Vulture. "Never could reenact it, couldn’t remember what I said at the time, and they actually used it."

All these years later, Englefield, who is a bit of a punk rocker now, finds it all pretty funny. However, her dad gets the biggest kick out of that moment. "My dad loves it because he loves to point out the fact that I make a really stupid face during that line," she said. "He’s held that against me for 14 years now, which is great, wonderful." Oh, dads.

Thirteen years later, Englefield said she was proud of the film. She doesn't even mind people referring to her as "the girl in The Holiday." Though, she does wish her friends would lay off their impressions. "It’s the one that my friends like to do most in bars," she said of the Mr. Napkin Head scene. "Awful, absolutely awful."

So this holiday, do Englefield a favor and don't try to improv your own Mr. Napkin Head scene. After all, you're not going to do any better than she already did.