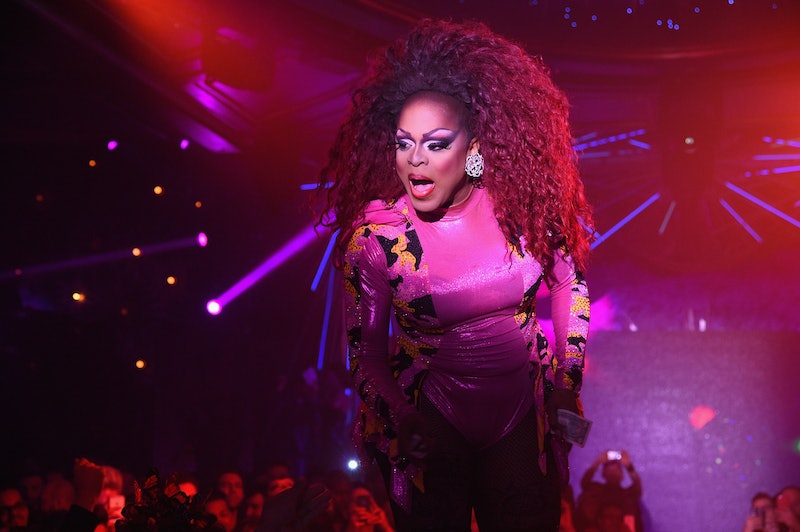 They might call Ru "mother," but most of the Drag Race queens actually have extensive drag families of their own. The show has already featured multiple sets of mothers, daughters, and sisters from the same drag families, but Season 11 might just be the biggest family affair yet. You've probably already heard of Kennedy Davenport (Season 7 and All Stars 3), Monét X Change (Season 10 and All Stars 4) or the late Sahara Davenport (Season 2), but now there are three new queens from the Davenport Family on Drag Race: A'Keria Chanel Davenport, Honey Davenport, and Rajah O'Hara.

According to Season 11 contestant Evie Oddly, who posted a Davenport family tree on Reddit, the Davenport matriarch is Kelexis Davenport, who hails from Oakcliff, Texas. According to her IMDb page, she's best known for appearing alongside William Belli and Krystal Summers in the horror-comedy Ticked-off Trannies with Knives.

In reality, however, Kelexis' biggest claim to fame is probably being the drag mother of not one, not two, but six fabulous drag daughters, including Kennedy and Sahara. In addition to these two Rupaul grads, she's also a proud grandmama to Monét X Change, Honey, and A'Keria. Here's a breakdown of the whole family tree.

While other members of her family might be all about the spotlight, Lady Deja Davenport, also known as Deja Smith, is making a name for herself behind the scenes. According to Them, she's worked as a personal makeup artists for stars like Laverne Cox, and currently works as a makeup artist and consultant on Ryan Murphy's FX series Pose.

The Davenport ladies are nothing if not tried and true pageant queens, and Londenn Davenport Raine is no exception. In an interview with the blog Drag Family Trees, Londenn explained that it was her first drag mother, Raven Delray, that got her to try out drag for the first time, but it was Kelexis that helped her perfect the art of competing in pageants. Londenn was crowned Miss Gay Oklahoma USofA in 2014, as well as Miss Gay International Plus.

Armani Nicole, too, has participated in multiple pageants on the southeastern circuit, starting in 1998, WDSU reports. Unfortunately, she has also run into some legal trouble. In 2014, 25-year-old Brenisha Hall died after receiving an illegal injection of a silicone-like substance from Armani, according to The Advocate. The outlet reports that Armani pled guilty to negligent homicide and was sentenced to two years probation and 50 hours of community service.

Bianca Davenport Starr (aka Jason Bradley) was a well-known drag performer in Fort Worth, Texas. Tragically, she was fatally shot in December 2017. A police spokesperson told Patch the incident was "a possible robbery gone bad," and a man was arrested in connection to Starr's death.

Stretching into the extended family of Kelexis Davenport, Honey Davenport, who comes from New York City, is the drag daughter of Lady Deja and drag mother to All Stars 4 co-winner Monét X Change.

A'keria Chanel Davenport is the drag daughter of Armani Nicole. Like her mother and grandmother, she's a Texas pageant queen.

Ra'jah might have O'Hara in her last name, but that's not to be confused with the same house that produced Asia and Phi-Phi. As she says in her Drag Race intro video, she's a Davenport through and through.

With so many ladies of the House of Davenport competing on Drag Race, one of them could easily take the crown. But no matter what the outcome is for these three sisters in Season 11, it seems unlikely we've seen the last of this last particular drag family.

More like this
Andy Cohen Apologized To Larsa Pippen After A 'RHOM' Season 5 Reunion Dust-Up
By Brad Witter
We Finally Have Some Answers To How Heather Gay Got A Black Eye On 'RHOSLC'
By Samantha Rollins
Hannah Ann Got Engaged 3 Years After 'The Bachelor' & The Proposal Was Dreamy
By Grace Wehniainen
Twitter Has Renamed Ekin-Su After *That* 'Dancing On Ice' Performance
By Sophie McEvoy
Get Even More From Bustle — Sign Up For The Newsletter
From hair trends to relationship advice, our daily newsletter has everything you need to sound like a person who’s on TikTok, even if you aren’t.