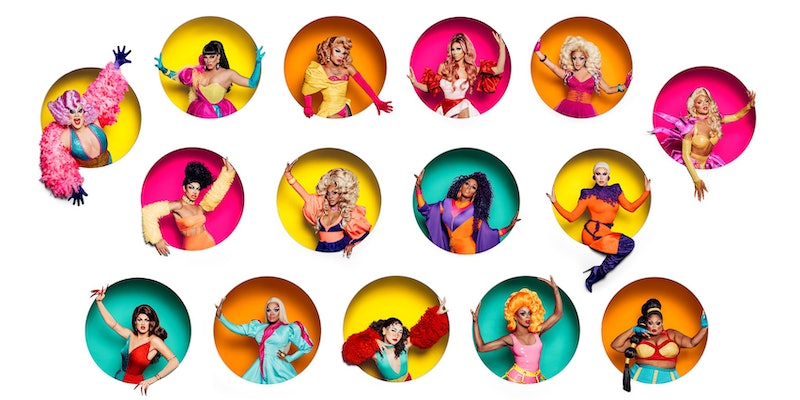 Yes, just as many RPDR fans predicted, Season 10 contestant Miss Vanjie (Miss Vanjie… Miss Vaaaaaaanjiiiiiie) is going to get another shot at becoming America's next drag superstar. Not that we fans needed another reason to be excited for Season 11, but the return of the meme-tastic queen sure is something to write home about.

And wow, does it sound like quite a season. In a press release provided to Bustle, series host and executive producer RuPaul said,

"Just when I think to myself – 'shedonealreadydonehadherses' – a new crop of killer queens sashay their way into my heart and leave me gagging for more. Dare I say, this might be the most sickening season of all time.”

The Season 11 premiere date has not been revealed, but according to VH1’s press release, it “will be announced soon.” But enough about what we don't know, let's get to what we do know: the Season 11 cast.

A’keria was the winner of the 2017 Miss Black Universe pageant and, as you might’ve gleaned from her name, is from House of Davenport. She is the drag niece of Kennedy Davenport and the late Sahara Davenport.

She’s a professional ballet dancer. She’s a Miss Continental winner. And, contrary to what her name suggests, she’s not from New York. She grew up in Canada.

Like A'keria, Honey is member of House of Davenport. She is the drag niece of Sahara Davenport and drag mother of All Stars Season 4 contestant Monét X Change.

On Thursday's cast "RuVeal," Mercedes told Rippon that she is the first Muslim drag queen to compete on RuPaul's Drag Race.

In 2015, Nina West started a fund with the Columbus Foundation. The Nina West Fund has since raised over $2 million for local groups that provide services for the LGBTQIA+ community.

If you suddenly feel the urge to pop your tongue, there's a reason for that: Alyssa Edwards is Plastique's drag mother.

And that is "D" as in Davenport. This House of Davenport queen is, as she says in her introduction video, "a jack of all trades" who can sing, act, dance, and backflip (!!!).

Scarlet was one of the dancers who performed alongside Katy Perry on Saturday Night Live in 2017. Oh, and as she says in her intro video, she is "the drama without all of the drama."

Shuga is more or less a drag newbie, but don't underestimate her. She has a background in opera and musical theater and, as she says in her intro video, has been "performing [her] entire life."

You may know Soju from "Shot with Soju," her YouTube show where she chats with Drag Race contestants. Now that she's a contestant, does this mean will she interview herself? That'd be fun.

The Miss Vanjie. The myth. The legend.

This Denver queen is, as she says in her IG bio, the "Official oddball of RuPaul's Drag Race Season 11."

More like this
Kathy Hilton May Not Return To 'RHOBH' — At Least Not Full Time
By Jake Viswanath
Hulu’s Mike Tyson Series Is Unlikely To Return For Season 2
By Brad Witter
Here's The Full List Of Zach's Confirmed & Potential 'Bachelor' Contestants
By Kadin Burnett and Grace Wehniainen
Clayton & Susie Broke Up, Citing "A Significant Amount Of Pain" After 'The Bachelor'
By Jordyn Tilchen
Get Even More From Bustle — Sign Up For The Newsletter