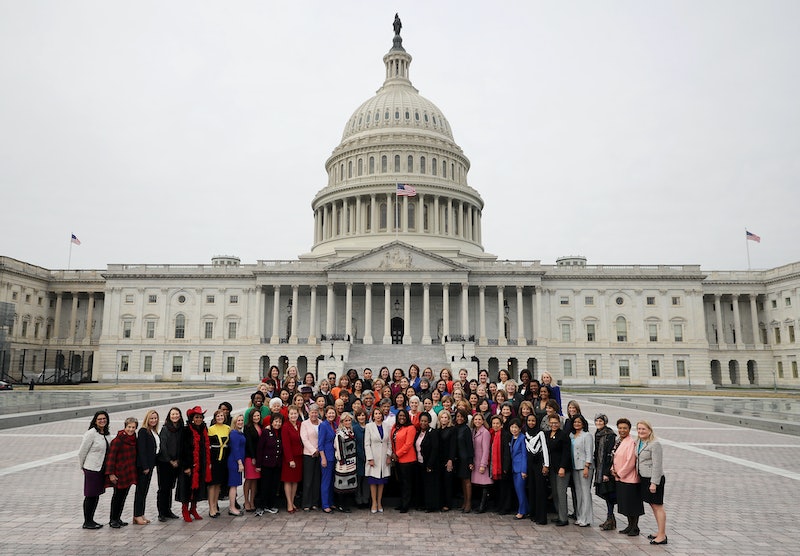 In a letter released on Monday evening, California Representative Zoe Lofgren, the chair of the House Administration Committee, answered a request by three representatives that menstrual products be made available in several locations in the House.

According to the initial request, which was made in the form of a letter by Reps. Debbie Wasserman Schultz, Sean Maloney, and Grace Meng, each representative has an MRA that can be used for “ordinary and necessary” expenses. For each representative, this includes expenses as big as salaries and as small as hand lotion. But for some reason, menstrual products have not always been considered "ordinary and necessary" — at least not in an instance last year, in which Rep. Sean Maloney tried to buy menstrual products for his staff members and was told he'd have to pay for it personally.

In a June press release, Maloney expressed his shock at the policy, given that approximately half of his staff are women. In the release, he said in part:

I couldn’t believe it when I found out about this – we use our office funds to pay for other necessary health products and there’s no d*mn good reason they can’t be used for this purpose. This is an important part of a larger discussion about how women are treated in the workplace here in Congress and across the country. It’s time for Congress to lead on these issues.

In the recent request, the representatives noted that the policy has remained unclear. Now, for the first time, menstrual products will be explicitly available and covered for purchase within the bounds of the MRA.

In his official statement within the joint letter written to Lofgren, Maloney said, "Saying tampons are superfluous but other hygiene products like hand sanitizer ... are totally necessary reinforces the idea that our rules are written by men, for men, and that women are merely second-class citizens on Capitol Hill."

Wasserman Schultz and Meng both weighed in, as well. Wasserman Schultz argued that the availability of menstrual products is "a basic, but critical health concern for most women." As for Meng, she said in part within her statement, "These products are basic and essential necessities, just like hand soap and toilet paper, and there should be no confusion or vagueness over how to pay for them."

As of January 2019, there are 102 women serving in the House of Representatives. That doesn't even begin to cover all of the staffers and administrative employees who work for each representative and within the House on other capacities.

This latest change marks the most recent in a long list of ways in which female (and some male) politicians have slowly and painstakingly worked to make Congress more friendly to women; as Broadly notes, women in Congress only received their own bathroom near the floor of the House in 2011.