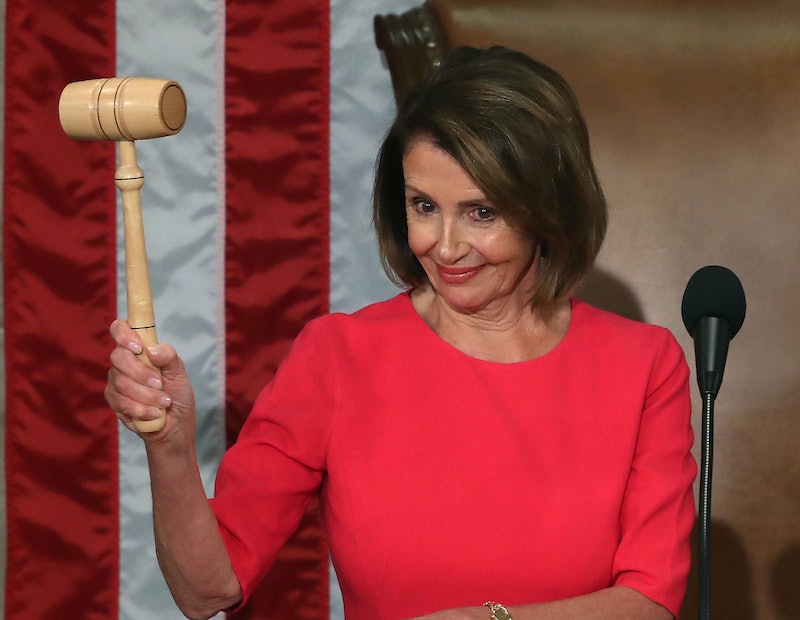 Thursday marked the first day of the new legislative session, as well as the nearly two-week mark of a partial government shutdown. An impasse over border wall funding has left hundreds of thousands of federal employees furloughed or working without pay, and it looks like it's going to be awhile before things get back to normal. Thursday night, a newly Democratic House passed a government shutdown solution. But without either the Republican Senate or the White House on board, there's little chance it will go much further, let alone be signed by POTUS.

The House's legislation comes in two parts. One is a bill to fund the Department of Homeland Security for one month, and the other is a package of bills to reopen the other closed federal agencies — Interior, Justice, State, Agriculture, and others — funding them through the 2019 fiscal year. Neither bill includes funding for the more than $5 billion border wall President Trump has insisted upon.

According to Vox, the reason House Democrats split it up this way is so that Homeland Security — which includes border security — can be dealt with separately from less controversial, but still essential, government organizations. But as Senate Majority Leader Mitch McConnell reiterated on Thursday, he won't be advancing either part of the House's solution to the Senate floor.

"I’ve made it clear on several occasions, and let me say it again," McConnell said, according to The New York Times. "The Senate will not take up any proposal that does not have a real chance of passing this chamber and getting a presidential signature. Let’s not waste the time."

Newly elected House Majority Leader Nancy Pelosi expressed frustration that the McConnell refused to take up even the second part of the solution, which would reopen most of the government while temporarily tabling the border wall debate. "What we’re asking the Republicans in the Senate to do is to take ‘yes’ for an answer," she said, according to The Washington Post. "We are sending them back exactly, word for word, what they have passed. Why would they not do that?"

But even though the House's legislation is effectively dead, it has put pressure on Republicans to compromise on a solution. Two Republican senators, Cory Gardner and Susan Collins, have already broken ranks to support an end to the shutdown even without border wall funding.

"I’m not saying their whole plan is a valid plan, but I see no reason why the bills that are ready to go and on which we’ve achieved an agreement should be held hostage to this debate over border security," Collins told The Post.

Mild Republican support in Congress is probably not enough to break the stalemate, however, since Trump says he won't sign anything that doesn't come with wall funding. "The Administration is committed to working with the Congress to reopen lapsed agencies," a White House statement read, "but cannot accept legislation that provides unnecessary funding for wasteful programs while ignoring the Nation’s urgent border security needs."

"Without a wall you cannot have border security," Trump said, according to The Post. "It won’t work."

According to Reuters, congressional leaders are expected to meet with Trump on Friday to discuss a funding solution. But Pelosi's opinion on border security is just another indicator that the back-and-forth to pass a funding bill is far from over.