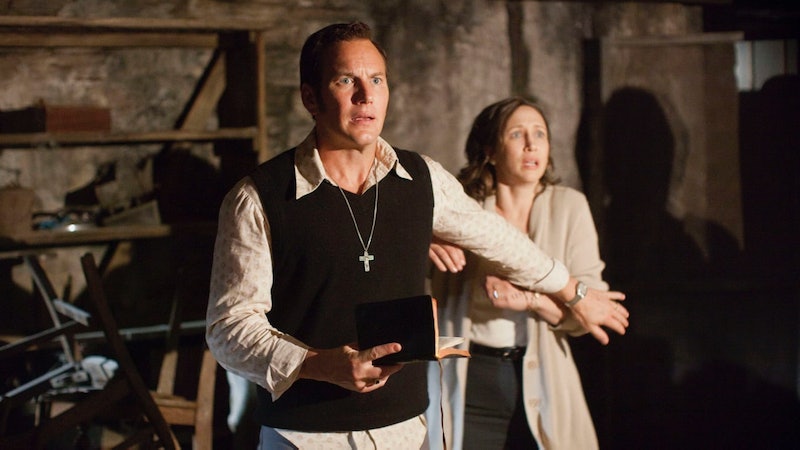 The centuries-old farmhouse located in Harrisville, Rhode Island has been known by many names over the years, including the Dexter Richardson House, the Old Arnold Estate, and Old Brook Farm — but these days, it’s known mostly as the allegedly haunted house that inspired The Conjuring. And now, it’s got new owners: Cory and Jennifer Heinzen just bought the Conjuring house — and they say it’s just as haunted in real life as you think.

Released in 2013, The Conjuring dramatized (and fictionalized) the events allegedly experienced by the Perron family when they lived in Harrisville in the 1970s. Paranormal investigators Ed and Lorraine Warren took on the case — and although it didn’t resolve quite as neatly in real life as it did in The Conjuring, it’s become infamous all the same. The owners who occupied the house for several decades after the Perrons moved out in the 1980s say that nothing spooky went on while they lived there; however, the Heinzens, who closed on the house in June, say they’re already experiencing some weird goings-on.

The Heinzens are paranormal enthusiasts themselves; indeed, Cory Heinzen, a former Marine who grew up in Western Maine, has been investigating allegedly haunted locations for about a decade, according to the Sun Journal. By day, he and Jennifer have been fixing the house up; eventually, they hope to open it up to the public for tours. Said Heinzen to INSIDER, “A day in the life of the house usually consists of daily upkeep like vacuuming and sweeping, making sure the outside is looking good, and then working on small household projects that might need to be fixed.” They spend sunset sitting on the back porch — but then, said Heinzen, “Once it’s dark outside, we start investigating.”

The house doesn't look like it does in the movie, by the way; the film was shot in North Carolina. Here's the actual farmhouse in Rhode Island:

According to Cory Heinzen, so far, he and Jennifer have experienced “doors open on their own, footsteps, disembodied voices, electronic voice phenomena, and some awesome spirit-box sessions,” he told INSIDER recently. (Electronic voice phenomena, usually shortened to EVP, include things like hearing voices or other sounds play back on a recording that weren’t present when the recording was made; spirit boxes, meanwhile, allegedly allow spirits or other entities to communicate through the “raw audio” produced by modified radios.) Heinzen also told the Sun Journal that they’ve heard some knocking — sounds which are commonly cited as evidence of an alleged haunting — from time to time, too. “I don’t have the feeling of anything evil, [but] it’s very busy,” he said to the Sun Journal. “You can tell there’s a lot of things going on in the house.”

The house gained its reputation after the Perron family — parents Roger and Carolyn and children Andrea, Christine, Nancy, April, and Cindy — moved into it in 1971. They claim to have begun experiencing odd and unusual events shortly after their arrival, which they say ratcheted up considerably over time. Activity reported by the family included items moving or going missing, sounds rising up from otherwise empty rooms, doors either slamming shut on their own or refusing to open, disembodied voices, odd smells, and even the occasional apparition. When it started to get physically harmful, though — with Carolyn bearing the brunt of it — they knew they were in trouble.

In The Conjuring, the Perrons seek out the Warrens directly and ask them for help; however, in real life, Ed and Lorraine Warren just kind of showed up at the family’s home one day — and almost as soon as she arrived, said Andrea Perron to the Providence Journal in 2013, Lorraine proclaimed the house to be occupied by a malevolent spirit called “Bathsheba.” The Warrens later determined “Bathsheba” to have been Bathsheba Sherman, who they said had been a practicing witch or Satanist.

The fictional version of the Perron house as seen in 2013's The Conjuring.

Bathsheba Thayer Sherman did exist; she was born in 1812 and died in 1885 at the ripe old age of 73. She’s buried in Harrisville Cemetery, as are her husband, who died in 1881 at around 70 years of age, and her son, who lived until his 50s. According to local historians, though, there’s no evidence to suggest that she was a witch or a Satanist — nor that she did any of the, uh, reprehensible things often attributed to her according to legend — which might be part of the reason the alleged spirit on the property isn’t thought to have been Bathsheba anymore.

Of course, the potential identity that’s sometimes pegged to the alleged spirit these days might not be accurate, either. According to the Providence Journal, some now believe that the spirit might be a Mrs. John Arnold who died by suicide in the farm's barn in the 18th century; however, according to a number of historians, the only Mrs. John Arnold known to have died in such a way in Harrisville passed away in 1866 — the 19th century, not the 18th — and in her own home about a mile away, not the Perrons’ former home.

Whatever the alleged spirit's true identity might be, the Warrens eventually opted to conduct a séance — which, unlike the fictional exorcism seen in The Conjuring in the place of the real life séance, ended a great deal less successfully. “[Carolyn] was possessed,” Roger Perron told the Providence Journal in 2013. “Her entire body was distorted. … and it lasted several hours, until they de-demonized her. And then I threw [the Warrens] out,” he added.

After sending the Warrens away, the family continued to live in the house until the early 1980s — and the entire time, the say they lived alongside all the spirits who allegedly occupied the house, too.

But of course, not everyone believes what the Perrons and the Warrens say happened inside that house; the Warrens, as well-known as they were (and are, even after both their deaths), remain controversial even within the paranormal community. The jury’s still out on whether the house is truly haunted or not — as well as whether such things as hauntings even exist in the first place.

Is it possible that the Heinzens are interpreting strange noises and doors opening and closing as paranormal because they already believe in the paranormal? Yes. Is it possible that skeptics who look at what the Heinzens say they’ve experienced and go, “Eh, it’s an old house; it’s probably just the foundations settling” are interpreting those same noises and doors opening and closing as just plain normal because they expressly don’t believe in the paranormal? Again, yes.

Even so, though — there’s no denying the historical appeal of the Dexter Richardson House/the Old Arnold Estate/Old Brook Farm/The Conjuring house, whether you look at ghosts as entertaining fictions or as real phenomena. And if the Heinzens do eventually manage to open the place up for tours? You’d better believe I’ll be taking myself to Harrisville to take a look myself.

More like this
Pret & Costa’s Coffee Is The Strongest On The High Street, According To Which?
By Sam Ramsden
Ashamed Of Your Screen Time Stats? Here's How To Change That
By Alexis Morillo
Learning To Love, Not Judge, The Lunchbox Wives Of TikTok
By Esther Zuckerman
A Guide To All Of Zach Shallcross' 'Bachelor' Filming Locations
By Brad Witter
Get Even More From Bustle — Sign Up For The Newsletter
From hair trends to relationship advice, our daily newsletter has everything you need to sound like a person who’s on TikTok, even if you aren’t.