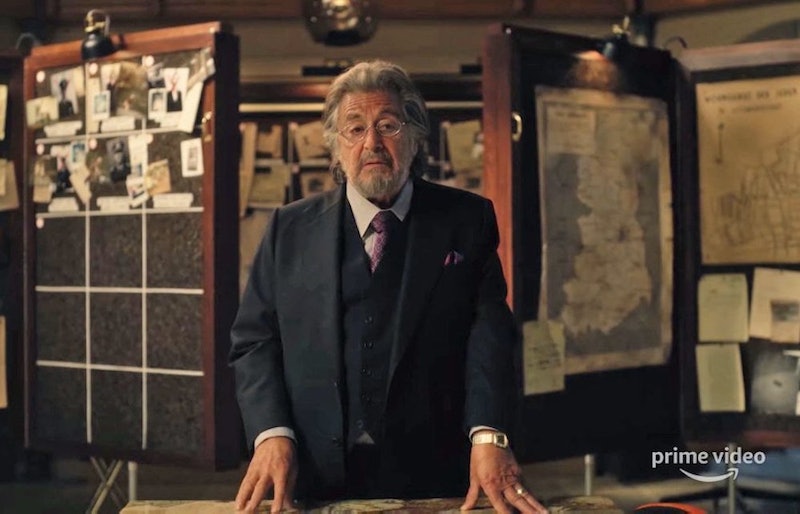 Jordan Peele will soon trade in murderous doppelgängers in Us for Nazi hunters in Hunters. The release date for Hunters was finally announced on Friday with a brand new revenge-filled trailer. Set to debut on Amazon Prime on Feb. 21, the 10-episode series will follow a group of Nazi hunters in 1977 New York who discover that escaped high-profile Nazi officials plan to create a Fourth Reich in America. Hunters, created by David Weil and produced by Peele, is led by Al Pacino as Meyer Offerman, a Holocaust survivor and the leader of the vigilante group of Nazi killers.

In the new trailer unveiled on Friday, viewers are offered more insights into how the coalition is formed. A young man named Jonah (Logan Lerman) discovers that his grandmother, a Holocaust survivor, is murdered in her home. Meyer (Pacino), who knew Jonah’s grandmother from a concentration camp, suggests that the best revenge is revenge itself. From there, the two form a band of killers that consist of a “lock-picker, spy, soldier, master of disguise, and two weapons experts,” as per the clip. “I think there are Nazis living in America,” a detective later says in the trailer. “And someone out there has taken them out.”

Of course, not everyone in the series agrees with the group's strategy. “There is a right way and a wrong way to get justice,” the detective later adds. “You do this, you become the evil you are fighting.”

Additionally, the tagline for Hunters claims to be inspired by true events. Pacino’s character has been paralleled to the late Holocaust survivor and Nazi hunter Simon Wiesenthal, but, as Vulture reported, the Simon Wiesenthal Center denied Hunter’s ties to Wiesenthal. In an interview with The New York Jewish Week in November, the center’s director of government relations said, “If Pacino is supposed to be Simon Wiesenthal, that does not come through.”

Along with Pacino and Lerman, the series also stars Josh Radnor, Jerrika Hinton, Kate Mulvany, Tiffany Boone, Louis Ozawa Changchien, and Carol Kane. In a statement provided to Deadline in 2018, Peele expressed excitement over the collaboration with Weil. “When David Weil first shared [Hunter] with me, I immediately knew that we had to be involved,” he said. “It’s cathartic. It’s noir. It’s frighteningly relevant. It’s exactly what I want to see on television.”

Watch the Hunters trailer above and stream the Amazon Prime series on Feb. 21.

More like this
Olivia Colman Stars In First-Look Trailer For BBC's 'Great Expectations'
By Sabah Hussain and Sam Ramsden
Everything To Know About The 'Daisy Jones & The Six' TV Series
By Maxine Harrison and Brad Witter
'The Crown' Season 6 Has Suspended Filming "Out Of Respect" For The Queen's Death
By Bustle Staff
Kit Harington Announced Rose Leslie's 2nd Pregnancy With An Adorable Story
By Stephanie Topacio Long
Get Even More From Bustle — Sign Up For The Newsletter
From hair trends to relationship advice, our daily newsletter has everything you need to sound like a person who’s on TikTok, even if you aren’t.