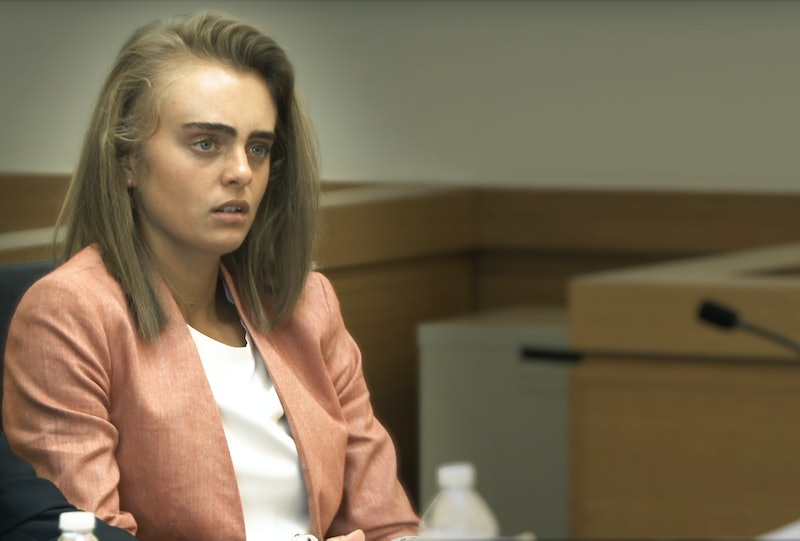 On Wednesday, March 6, HBO released the first teaser trailer for I Love You, Now Die: The Commonwealth vs. Michelle Carter and the details surrounding the true crime documentary are shocking — to say the least. Deadline reported that the two-part doc will chronicle the 2014 suicide of 18-year-old Conrad Roy III, whose then-17-year-old girlfriend Michelle Carter sent texts urging him to end his life on the day that he died.

In 2017, Carter was convicted of involuntary manslaughter and sentenced to 15 months in prison after a judge found that her texts were directly connected to Roy's suicide, as reported by CNN. She appealed the case, and was set free on bail, but in February of 2019, was ordered to begin serving out her sentence after a ruling by the Massachusetts Supreme Judicial Court, according to the Boston Globe. And now, the case is the subject of a soon-to-be nationally televised documentary film.

The short trailer for I Love You, Now Die opens with a brief written summary detailing the beginnings of Carter and Roy's romance. The white text, featured on a simple black background reads:

"Michelle Carter and Conrad Roy fell in love in 2012. / They lived and hour away from each other and met no more than five times, but they exchanged thousands of text messages over two years. This is their story."

Showcasing the shoreline of Mattapoisett, Massachusetts, the town in which Roy was born and raised, the clip then moves into some of the disturbing text messages exchanged between Carter and Roy on July 12, 2014. In the texts, both Roy and Carter professed their love for one another, which seems like totally normal dialogue for a teenage romance. However, the tone quickly changed as Roy revealed that he was in "unbearable" pain and Carter replied, "I think it's time to do it now then," telling Roy "it's okay to be scared and it's normal." She then disturbingly followed up with, "I mean, you're about to die."

Roy was found dead the following day (July 13) of carbon monoxide poisoning, after having locked himself in his truck. According to prosecutors, Roy died while Carter listened on the phone. Details from the case, as reported by BuzzFeed, reveal that at one point Roy tried to back out, but Carter told him to get back in the truck and follow through with his suicide plans.

Although the clip doesn't reveal much more of the documentary, Deadline noted that the film will raise questions surrounding the use of technology, and whether or not a person, particularly a teenager, should be held accountable for another person's suicide. Throughout its harrowing account, the doc will also showcase interviews and comments from those closely involved and affected by the Commonwealth vs. Michelle Carter case, as well as reactions from society as whole.

I Love You, Now Die: The Commonwealth Vs. Michelle Carter will make its debut at SXSW March 9 and is due to premiere sometime this summer on HBO.