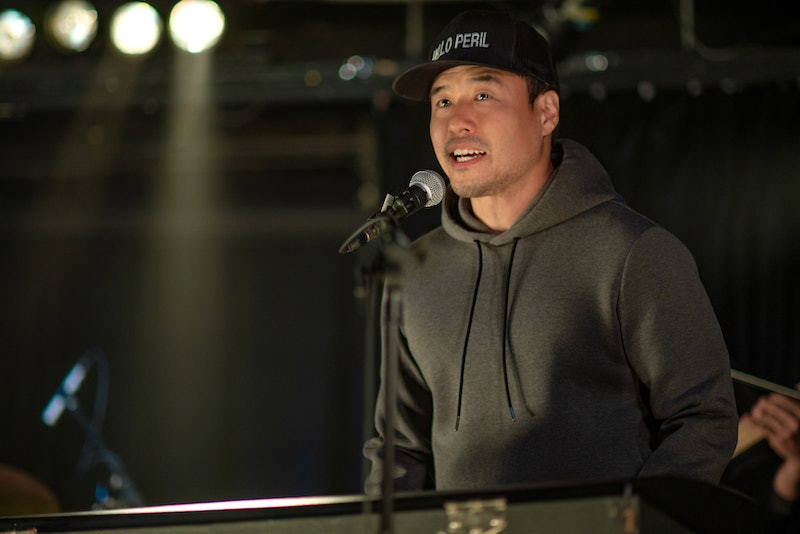 There are many reasons to fall in love with Ali Wong and Randall Park's new Netflix movie Always Be My Maybe, which made its debut on the streaming service last weekend. However, one of the most talked about scenes in the film occurred when Park's character punched Keanu Reeves (playing himself) in the face. Park was even inspired to write a song about the moment, which was featured during movie's end credits. But according to the actor, the "I Punched Keanu Reeves" song in Always Be My Maybe almost didn't happen at all.

“Originally, we didn’t even know we were going to do that song,” Park told Entertainment Weekly during a recent interview. “We had a cut of the film and it was during the post-production process that we decided to use that one line that ends the movie where Ali says, ‘Maybe you should write a song about punching him.’" The line acts as a perfect introduction to the hilarious track, but it was originally just one of many closing lines they filmed. "That came from a batch of different lines we recorded to close-out the movie, but we chose that one. So after when we saw the cut, a Netflix executive suggested that we make the song."

In the film (spoiler alert!), Park's character, Marcus, gets into a heated conversation with Reeves, who Wong's character, Sasha, is dating at the time. The argument comes to a head when Reeves basically dares Marcus to punch him in the face. So he does. And since it's not every day that one gets into an altercation with a famous movie star, Marcus, who moonlights as the Hello Peril frontman, ultimately decides to write a song about the experience.

Needless to say, the thought of "I Punched Keanu Reeves" not being included in the movie feels like a travesty of epic proportions. But thankfully, everything that had to happen for it to fall into place did, and the result is nothing short of perfection. The song, which serves as a collaboration between Park and hip hop producer Dan the Automator, who also worked on Hello Peril's other original tracks, turned out to be a big hit.

“We reached out to Dan and asked him for one more beat," Park explained to EW. "We did it really fast. I flew out to San Francisco, wrote the lyrics and we recorded the song at the very last minute. And now, it’s immortalized during the closing credits.”

For his part, Dan the Automator was more than thrilled to make it happen and felt that the idea was hilarious. "“We spent a lot of time together working on the film, both socially and otherwise. So when they asked for another song, I was like, ‘Yes, let’s do this,'" he told EW, adding, "Randall came up with the lyrics, which are hilarious. What makes the lyrics work for something like this is his combination of deadpan and dry comedy."

So next time you're sitting around and listening to the Always Be My Maybe soundtrack — which, admit it, is something you're probably going to do on a daily basis — just be extra grateful that the song exists and that the people behind it fought to make it happen.