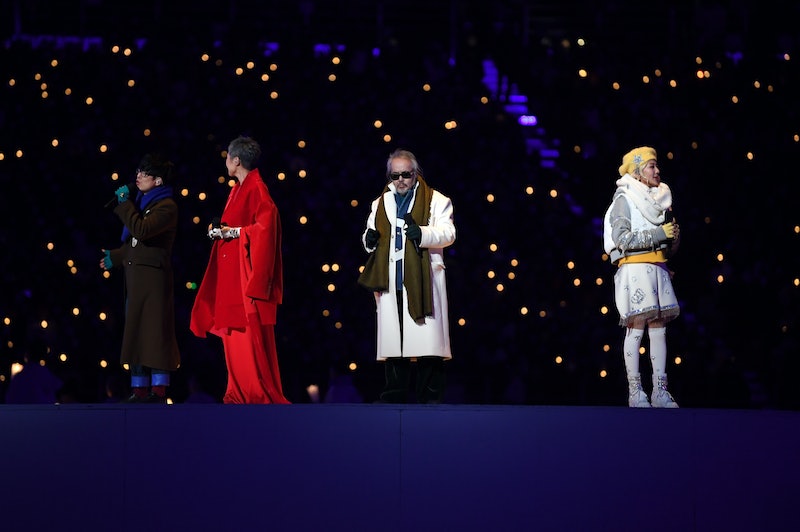 There were so many eye-catching and awe-inspiring moments during the 2018 Olympic opening ceremony. But, one person in particular got the attention of many viewers: singer Jeon In-kwon. He may be better known as the sunglasses guy who sung "Imagine" at the Olympic opening ceremony now, and it's safe to say that his fashion aesthetic, and the musical rendition, is already going to be a memorable moment from this year's games.

At the opening ceremony in PyeongChang, South Korea, there was a fabulous celebration of Korean culture and the world, as befits the nature of the Olympic games. In one particularly moving moment, a group of musicians, including the sunglasses guy himself, Jeon, performed a rendition of John Lennon's "Imagine."

During their performance, the singers were joined by a large group of performers who were holding candles. The group then formed into a large dove surrounding the group of four musicians. The imagery, along with the "Imagine" rendition, made up a beautiful scene that symbolized the desire for peace within the world. It was such a moving moment in the already wondrous opening ceremony.

However, that moving moment wasn't the only fun part of the entire scene. Some couldn't help but comment on Jeon's instantly iconic look. While the opening ceremony took place at night in PyeongChang, the singer couldn't help but don his trademark sunglasses. While his fellow singers were a bit more animated than he was while they sung, Jeon was super focused on belting out the John Lennon tune. You can't blame him, though. It's the Olympic opening ceremony and performing during it is a huge honor.

Some users on Twitter commented on Jeon's entertaining performance. Comedian Tiernan Douieb joked around about the singer's look and his performance at the ceremony.

Another user joked about Jeon's interesting performance, as well:

Jokes aside, this definitely isn't Jeon's first rodeo. He's been in the music business, in his native South Korea, for decades now. The singer started his career as a vocalist in the K-pop band, Deulgukhwa, in 1983. According to the Korean Herald, the band was so popular in the country that they were considered to be the "Beatles of Korea." Deulgukhwa ushered in a new age for Korean rock music, with Jeon at the helm.

The band has had its share of ups and downs throughout the years, as the Korean Herald goes on to say. They've disbanded a total of three times throughout their long run. Shortly before their most recent disbandment in 2013, they released a self-titled album, Deulgukhwa, which saw much praise within the nation. However, the band ultimately decided to part ways soon after longtime drummer, Joo Chan-gwon passed away from cancer in early 2013.

This disbandment hasn't stopped Jeon from performing, however, as his appearance at the opening ceremony indicates. One of his more recent performances took place in 2016. At the concert, he played one of Deulgukhwa's biggest hits "Don't Worry, My Dear" to a thrilled DMC Festival audience.

Jeon was most recently in the news because of that very hit. In 2017, the singer was hit with a plagiarism accusations over their classic tune. According to Korea Joongang Daily and the Korean Herald, German band Black Fooss alleged that the song was plagiarized from their 1971 song "Drink doch eine met"because of the similar melodies between the two tracks. Jeon denied the plagiarism accusation and said that, while he noted that there were similar parts, "I did not plagiarize. The singer of the band seems as if he's a bit similar to me but I do not plagiarize."

Regardless of what's going on in Jeon's personal life related to his K-pop career, one thing is for sure: He's provided Olympic viewers with a truly memorable moment this year with his "Imagine" performance.