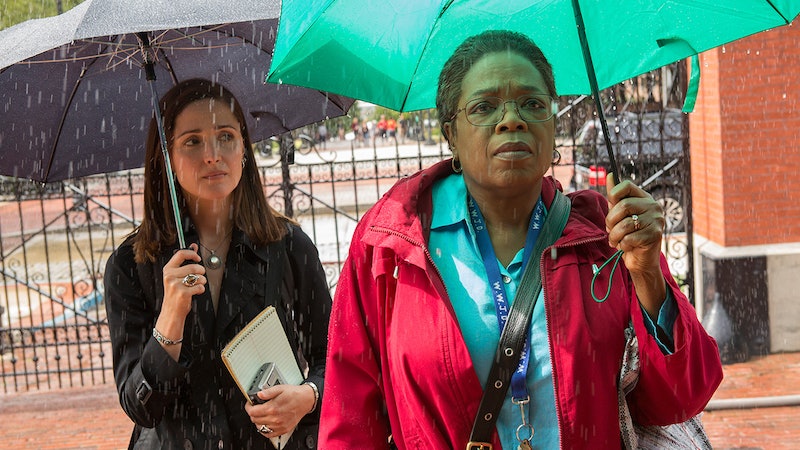 There is so much that the world owes to Henrietta Lacks, the African-American tobacco farmer who, in 1951, had a tissue sample removed from a malignant tumor in her cervix without her permission or knowledge. The new HBO film The Immortal Life of Henrietta Lacks, which premiered on April 22, reflects on who Lacks was and what her cells have contributed to modern science, but her story is just the beginning. America has a history of medical exploitation, particularly with Black people, and Lacks' case is just one example of this horrifying trend.

Lacks' tale became well known due to Rebecca Skloot's award-winning 2010 book, which explored how, in the course of Lacks’ treatment for cancer, doctors isolated what became the first “immortal” human cells. Called HeLa, they helped lead to many medical advances, and they have been in continual use in labs around the world for 65 years, long past Lacks' death. Yet they were taken without her permission, a practice that, sadly, was not an anomaly, and still isn't. Doctors can legally take cells from tissues removed from you for further study under the ethical guidelines of "Common Rule," as long as the specimens are de-identified — meaning your name and other personal information are no longer attached to them anymore. Of course, these doctors hopefully have their patients' permission first, but that's unfortunately not always the case.

Despite the benefits to health and science that HeLa cells caused — and the profits they earned the medical industry — Lacks' family knew nothing about her cells being used until researchers published her name in a 1973 article, and a family friend who had worked with the cells put two and two together. To scientists, her identity wasn't worth honoring, and it's heartbreaking to realize how many other people have suffered a similar fate. In 2008, for instance, former dentist Michael Mastromarino was indicted for stealing more than 1,000 bodies in order to sell body parts and tissue, as New York reported.

There is a thriving market for black market organ, blood, and cell stealing around the world, and even children have been trafficked into countries like Britain in order to illegally provide organs. Under the National Organ Transplant Act of 1984, it is illegal for anyone to knowingly buy or sell organs for transplant in the U.S., but that doesn't mean it doesn't still happen in this country and others. Just take this young Somalian girl, whose identity was never released and who was taken from Somalia and smuggled into the UK so that her organs could be removed and sold, according to The Telegraph.

The illegal harvesting of organs, tissues and cells from Black children, women and men, especially, doesn't often get media coverage but is a significant problem. In Savannah, Georgia, 17 year-old Kendrick Johnson’s body was found rolled up in a wrestling mat in his high school gymnasium in 2013, according to CBS News. Johnson’s family discovered that he was missing his organs, although the South Georgia Lowndes County Sheriff’s investigation ruled Johnson’s death a freak accident. Yet another case that was brought to light in 2013, was that of 24 year-old Ryan Singleton, whose body was found in a California desert with his eyes, heart, lung, liver, and kidneys missing.

And in addition to organ stealing, there are unethical sterilizations and tissue removals happening to people without their consent. According to NBC News, between 1929 and 1974, about 7,600 people were sterilized in North Carolina without their consent. Under the 1929 North Carolina Sterilization Law, doctors conducted vasectomies, castrations, salpingectomies (surgical removal of the Fallopian tubes), and ovariectomies (surgical removal of one or both ovaries) to study or stop men and women from reproducing. Of those who were sterilized, 85 percent of the victims were female and 40 percent were non-white.

Then there's the infamous Tuskegee Experiment, in which 399 Black men between 1932 and 1972 were subjects of a study by the U.S. Public Health Service to examine the progression of untreated syphilis. This experiment is perhaps the most well-known example of unethical biomedical research.

These cases are scary and disturbing, and it's horrible that they happen in the Black community with little awareness from the rest of the public. Hopefully, movies like the Immortal Life of Henrietta Lacks will shine a light on this horrific topic and create discussions about these unethical practices.