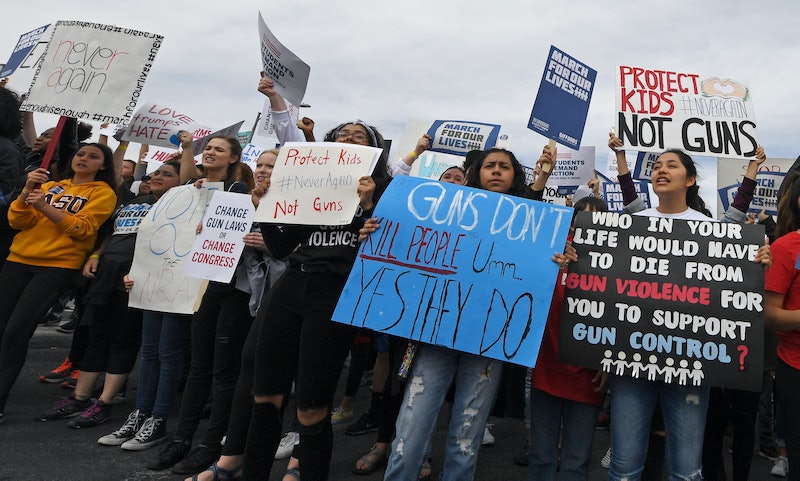 Last month, two teens who survived the 2018 Parkland mass shooting — at least one of whom struggled with post-traumatic stress disorder — died by suicide within a week of each other. So did Jeremy Richman, the father of Avielle Richman, one of the children killed in the 2012 Sandy Hook mass shooting. Richman and his wife, Jennifer Hensel, had started the Avielle Foundation after their daughter was killed, dedicating themselves to preventing violence through brain research. And while the mother of activist Amber Evans, whose body was found in March 2019 after a two-month search, disputes claims that her daughter died by suicide, those who knew Evans described her life in terms of its dedication to justice: “Anyone who knew Amber knows that she was extremely disciplined and dedicated to struggling for a better world,” Tynan Krakoff, lead organizer for Showing Up for Racial Justice (SURJ) Columbus, told The Grio.

They're timely conversations, as social and political issues like March for Our Lives or Black Lives Matter take center stage in our national dialogue. And it’s not just issues of gun violence or racial inequality that keep activist up at night. Environmental disaster, attacks on reproductive justice, the rise of violent white nationalist terrorism — all these are fights that social justice activists and advocates feel compelled to address. And the pressure can be suffocating.

This is especially true when the people who experience the devastating consequences of harmful policies or inequalities are then motivated to join or start movements of change. But this path isn’t easy. In fact, it can be dangerous.

Dr. April Foreman,, a psychologist and board member of American Association of Suicidology, says that there are studies that show post-traumatic stress is linked to genetic factors, and only around one in five people have a genetic predisposition to developing PTSD. But when someone's identities are impacted by the issues they’re fighting, their risk for developing PTSD or related suicidal ideation increases.

The work is overwhelming and [it’s] compounded by not feeling safe.

Certain historically marginalized groups, like women, experience PTSD at higher rates than their non-marginalized peers. Epigenetic or generational trauma — trauma that is passed through genes — also results in harmful symptoms for Black Americans, other people of color, and the descendants of Holocaust survivors. Even without having any direct contact with an ancestor who survived trauma, the symptoms of that trauma (like chronic depression or anxiety) can still impact the genes of the survivor’s descendants.

Sometimes personal identities and traumatic experiences can inform the activism work people choose to do. But this can also potentially heighten the risk of anxiety, depression, and suicide.

Linda Sarsour is one of the founders of the Women’s March and a Muslim Palestinian-American activist who has experienced online harassment and death threats related to her activist work. Sarsour says she wishes that more people understood just how isolating activism work can be. Sarsour tells Bustle, “Activists often become caricatures to people, for some even super-human. Many don’t realize the deep depression and anxiety we experience. The work is overwhelming and [it’s] compounded by not feeling safe and worrying about your life and the lives of your children.”

I can relate. As a writer who discusses racism and gender-related violence, I’ve experienced intense online harassment, resulting in numerous trips to urgent care for anxiety-related health problems. Sometimes interviewing people about the sexual or racist abuse they’ve endured can leave me deeply depressed for weeks.

This is a prime example of vicarious trauma and compassion fatigue, or when people struggle with symptoms related to witnessing or hearing about trauma other people experience. Most activists, regardless of their identities or experiences, feel strongly about the causes they champion and the people that they seek to help. But that level of dedication can also pose a risk to mental health.

“Because activists are so consumed with how everyone else is feeling — and they’re genuinely concerned, they really want to help — they can lose themselves in the process,” Celeste Viciere, LMHC and the host of the podcast Celeste the Therapist, tells Bustle.

Viciere says that constant activism becomes dangerous “when you get to a breaking point where […] you’re overwhelmed, overworked, angry, stressed. And because you’re not paying attention to it, you end up snapping. It may seem like it happened overnight. But for the mind and the body, it’s not overnight, it’s been a long time coming.”

That’s why Viciere feels that “it’s so important to take care of yourself throughout the process [of activist work],” not just when things get bad. One solution, she says is intentional mindfulness and the awareness of one’s internal processes. Dr. Foreman agrees, saying taking care of your mental health should be approached the same as physical health. “Just like if the flu is going around and you know that your immune system is not so great […] you would be careful, not because you’re pampering yourself but because that’s just how you stay well,” she says.

The world of social justice activism and advocacy work can be deeply fulfilling. But it can also leave people who do this work feeling empty and powerless.

“People in social justice career fields, or any field with intense emotional labor and high proximity to trauma, [should] be aware that if you have a [...] genetic predisposition or [have experienced trauma], the higher the risk is that you could develop a mental health disorder. And if you have other complications, you could become suicidal,” Dr. Foreman says.

But it’s easy to say that activists should all engage in self-care and be proactive in seeking medical and mental health professionals. However, we know that mental health care is hardly accessible to everyone, especially people from marginalized communities or those who might not have insurance. That is why Dr. Foreman urges activist organizations to “recognize emotional labor and recognize risk,” by implementing employee assistance programs that provide health care and other forms of support. It’s not enough to merely say that they encourage self-care, Viciere says, but that self-care must be “mandatory, implemented in the policy [...] and accessible.”

The world of social justice activism and advocacy work can be deeply fulfilling. But it can also leave people who do this work feeling empty and powerless, and harassment and violence can leave activists feeling isolated. It is important for activists, whether they're part of formal or informal activist communities, to take care of their mental health. It’s important for organizations provide access to needed, life-saving resources when they can. And, as Viciere says, it’s important for people to remember that “we’re only human [...] we don’t have to carry the whole world on our shoulders.”

More like this
This Psychological Effect Might Be Keeping You From Hitting Your Goals
By Lexi Inks
19 Latinx Therapists & Mental Health Experts To Follow On Instagram
By Kaitlyn Wylde, Naydeline Mejia and Lexi Inks
Black Women's Equal Pay Day Highlights An Upsetting Problem
By Brandi Neal
Here's How Cardio & HIIT Affect Your Body Differently
By Carolyn Steber
Get Even More From Bustle — Sign Up For The Newsletter