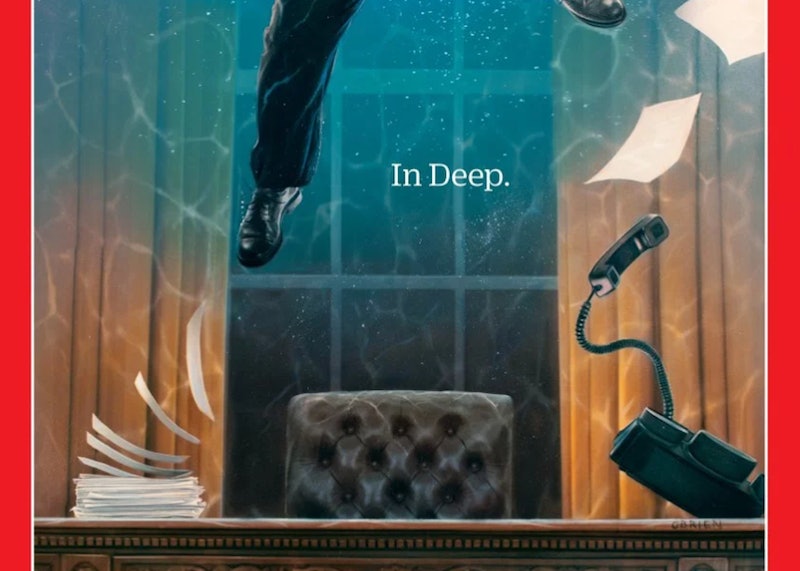 Time magazine is drowning in compliments. People are oohing and aahing on Twitter after Time released the latest cover from Tim O’Brien, which depicts what appears to be the bottom half of President Donald Trump submerged in water. The Time cover boasts the simple words: “In Deep.”

The latest cover for the magazine was made public Wednesday night, Aug. 22, in CNN’s Reliable Sources newsletter by Brian Stelter. It’s O’Brien’s third Time cover in this series featuring Trump and depicting the “chaos” at the Trump White House.

O'Brien's three Trump Time covers, when compared side-by-side, send an intense message about how the White House has run since Trump’s inauguration. The first cover, published in February 2017, showed Trump at his desk with papers flying and strong winds blowing his hair. It said “Nothing to See Here.” The second, published in April 2018, showed a similar image of Trump in the wind, but this time, he was up to his elbows in volatile-looking water. It simply said: “Stormy.” Now, this third iteration still shows the desk and the papers, but the water cloaks the entire cover and you can only see the bottom half of what appears to be a disheveled and drowning Trump.

Back in April, O’Brien spoke to Time about the second cover. “When I painted the ‘Nothing to See Here’ cover art, like many, I assumed the level of chaos could not last, that patriots on both sides of the aisle would step forward to control much of what transpired in the past year,” O'Brien told Time.

As he talked about the April cover, he noted that he felt the storm was a metaphor for everything that had been happening to the White House.

As the never-ending flood of breaking news washed over the White House, and the firings, the scandals and the general mayhem filled each news cycle, I felt the storm metaphor was as relevant as ever. I mostly thought about how water would fill the space, how it would be transparent in some areas and reflective in others.

The metaphor continues. The new "In Deep" cover — which outlets such as The Huffington Post have gleaned is supposed to show that Trump is treading water — comes after big legal news from Monday. Longtime Trump attorney Michael Cohen pleaded guilty to fraud, tax fraud, and campaign finance violations. Trump has denied that any campaign finance money was used inappropriately, according to CNN. Meanwhile Trump's former campaign manager Paul Manafort was convicted on eight charges.

Folks on Twitter have generally had a lot of praise to dish out about the Time cover.

One user, quipped: "Pretty sure this is one Time cover Trump won't be hanging up at the golf club."

Despite that comment, Trump has appeared to be happy with previous Time covers. Back in 2015, he tweeted that he was "honored" to find himself on the cover. Then, in 2016, Trump was named Time's "person of the year."

According to Time, O'Brien is a Brooklyn artist whose work has been featured on over two dozen Time covers. His work has been showcased on everything from U.S. postage stamps to The Hunger Games book covers.

More like this
50 Books To Read With Your Book Club
By K.W. Colyard
The First Trailer For Zac Efron’s 'The Greatest Beer Run Ever' Is Action-Packed
By Charlotte Moore and Sam Ramsden
Dr. Anna Pou Is Still Practicing Medicine After Facing Murder Charges
By Brad Witter
This New TV Show Revisits The Most Controversial True Story From Hurricane Katrina
By Brad Witter
Get Even More From Bustle — Sign Up For The Newsletter