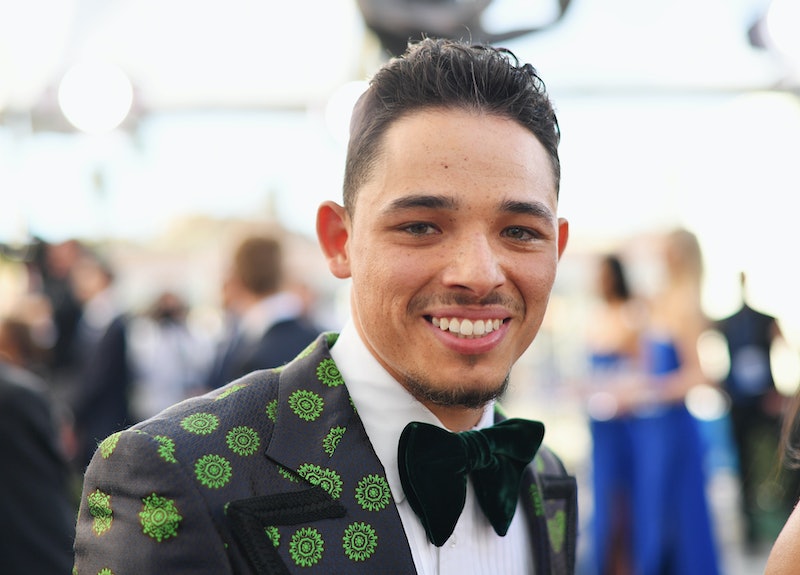 A surprise announcement from Lin-Manuel Miranda on Thursday has fans super excited about his next endeavor. Miranda shared the In The Heights movie cast list on Twitter, and a Hamilton star is stepping into the lead role.

Jon M. Chu, who directed Crazy Rich Asians and is directing the upcoming movie, announced in October that Anthony Ramos will play Usnavi in the new film. Ramos played John Laurens and Philip Hamilton in the Broadway show Hamilton's original run, and the fact that he's starring in the new movie should delight fans. Aside from Ramos, though, the majority of the In The Heights cast list had only been rumored, before Miranda confirmed the list of actors that would step into the supporting roles. And it's a pretty talented group of people, too.

Melissa Barrera, whom fans might recognize as Lyn from Vida, will play Vanessa, Usnavi's love interest. And Corey Hawkins, who's acted in The Walking Dead and BlacKkKlansman, will play Benny, while Leslie Grace will take on the role of Nina.

And for fans who are wondering just when they'll be able to see the finished product, it might be sooner than you think. Miranda tweeted that In The Heights will start filming this summer, which isn't far away at all. "We film this summer. Uptown. Right here In The Heights. ...More soon!" the composer and actor tweeted. Miranda also shared a photo of the four In The Heights stars together, adding that they've been "rehearsing" together, presumably on the movie's musical numbers.

As for the rest of the cast, there are more reports out there, too. Collider reported Wednesday that Jimmy Smits will play Nina's dad, Kevin, in the movie. Most recently, the West Wing actor played Annalise's therapist, Isaac Roa, on How to Get Away with Murder. Kevin is a pretty big character, too — Benny works for Kevin, and his boss isn't thrilled about Benny dating his daughter.

But it's still possible that Smits won't be in the film, if one of Miranda's earlier tweets is any indication. Before revealing the four main stars, Miranda tweeted, "Semi-regular reminder that if you hear Heights movie casting news and it ain't from me, @jonmchu, or @quiarahudes, it ain't casting news. It's hearsay." It's not clear if he was referring to the report about Smits, but the actor wasn't mentioned in Miranda's casting tweets.

Last June, Variety reported that In The Heights will be released on June 26, 2020. That's still more than a year away, but for now, fans are just happy for the casting news.

Jordan Fisher, who played Mark in Rent: Live and will play John Ambrose McClaren in the upcoming To All The Boys I've Loved Before sequel, is already cementing himself as one of the project's biggest fans. "I just wanna go hang out on the #InTheHeights set, drink cafecito and listen to everyone sing the score all day," Fisher tweeted on Thursday.

In The Heights ran on Broadway from 2008 to 2011, winning Miranda the "Best Musical" Tony Award years before Hamilton made him a household name. But even fans who didn't get to see the show's earlier run will still probably love the movie, especially fans of Hamilton. And with the casting news, the In The Heights movie is one step closer to fruition.