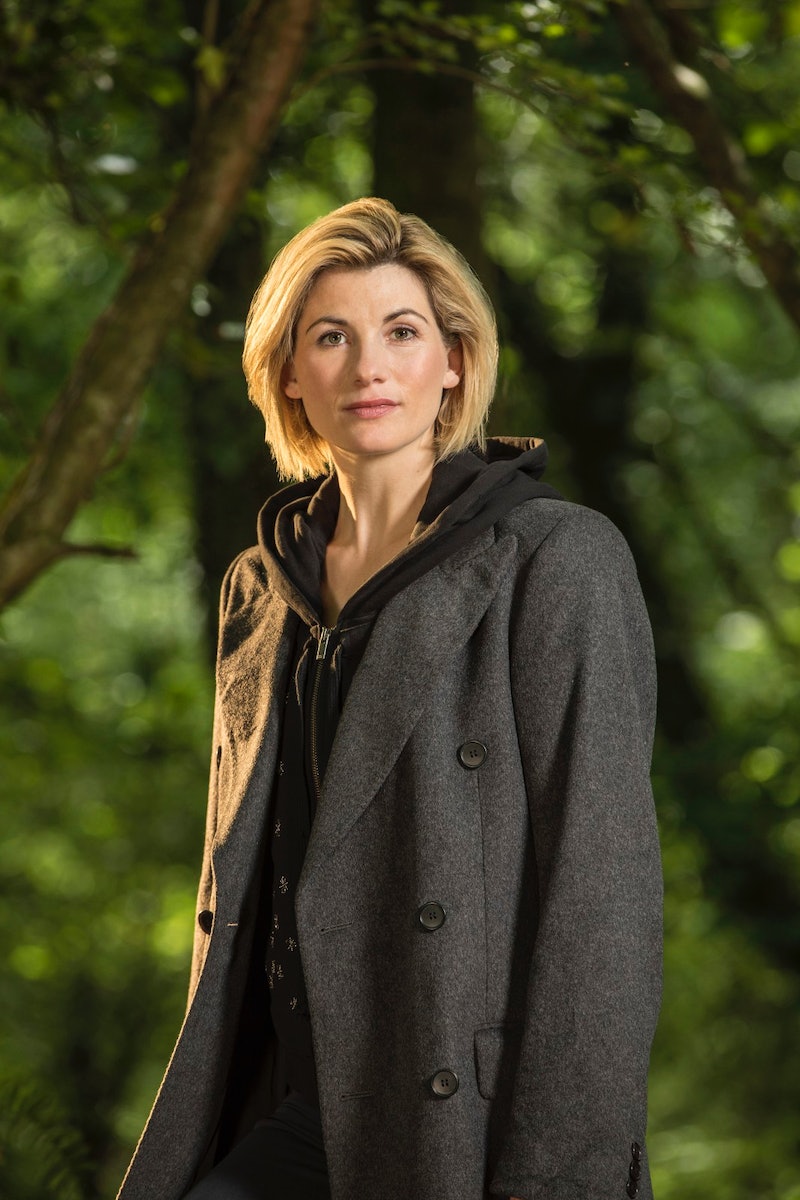 Like most serious (and American) Doctor Who fans, I was furiously refreshing my Twitter timeline on Sunday, July 16, waiting for some life-defining casting news that was broadcast in the UK to finally hit the web. As happens every few years, the BBC had recast the role of the Doctor, a face-changing, time-traveling humanoid alien played exclusively by — up until now — white men. It's canon in the show that Time Lords can change genders when they regenerate. In Season 8, outgoing showrunner Steven Moffat cast Michelle Gomez as Missy, the first female version of the Doctor's best frenemy, the Master. And with the amount of representation conversation that went on leading up to the decision, this felt like a make-or-break moment for Doctor Who. Its ironic resistance to change was becoming embarrassing, and I was prepared to seriously re-examine my relationship with it should there have been a different outcome. But Jodie Whittaker is the 13th Doctor, and all womankind is celebrating, right? Nope. Some female Doctor Who fans aren't happy with this casting, and the reason why breaks my heart a little bit.

I'm going to rewind a few years, to me sitting on a panel with a bunch of other Doctor Who geeks at a fan convention. A discussion that was meant to be about how casting a woman in the titular part would affect the show unraveled into a conversation about whether or not that should happen — a conversation all of us have had ad infinitum. (Seriously, ask anyone you see on the street who's wearing a TARDIS of some kind; they'll recount them to you like war stories.) While I'd anticipated a lot of the pushback — "Why mess with tradition?"; "Aren't X number of female characters enough for you?"; "Girls in space, are you insane?!"— I was shocked by one particular complaint.

A woman in the audience raised her hand, stood up, and said, "I prefer the Doctor to be a man, because I want to have a crush on him."

Friends, my friends. You deserve so much better than that. You aren't the sidekick. You're the lead.

It saddens me to see that so many women who are fans have internalized the gender roles they see in media to the point that they would rather date the hero than be her, to believe that the male hero is the rule and the female the exception, or to tell themselves that 50-plus years of casting bias is "tradition" and not institutionalized prejudice. So many of these arguments are couched in "I'm a feminist but...," which confuses the issue even further.

There are more jerky opinions in Doctor Who fandom than settings on a sonic screwdriver, one of them being that young, female fans who experience attraction to men and will gladly pin up pictures of David Tennant, Matt Smith, and yes, Peter Capaldi in their proverbial lockers are "fake geek girls." So I would never presume to tell anyone that it's not OK to think the Doctor — any Doctor — is hot. But besides aesthetics, the primary reason that I would run away with him the moment he asked is because I secretly want to be him.

He represents boundless curiosity, compassion, freedom, and wanderlust. He doesn't always save the day, but he always tries. He has a magic box that goes anywhere in time and space. The companions he brings along with him are mostly women, and are powerful, magical, strong characters in their own right; but come on, wouldn't you rather be the pilot than the passenger?

Whittaker's Doctor is going to have all of the qualities that make this character timeless and be just as seductive as the rest of the Doctor's incarnations. And if you can't accept those characteristics in someone who looks like you, or you need them to come along in a package that matches your sexual orientation, what does that say about how you see yourself?

Another frequently tossed about argument is that the Doctor must remain male in order to provide a pacifist, intelligent role model for young boys. To the women perpetuating this belief, I ask: did you never look up to a male character? Haven't we had to do so because that's pretty much all there is? If you've found inspiration and identification in 12 male Doctors, why on Earth should boys not aspire to be Whittaker's version?

This viewpoint reveals that many fans feel that there's something wrong and unnatural about boys looking up to women and that protecting that representation for boys is more important than letting girls have it for the first time. To draw this line in the sand is to perpetuate the climate of toxic masculinity that makes more space for gun-toting, hyper-macho vigilantes than male characters like the Doctor.

Some of my favorite reactions to the BBC announcement were parents of boys who shared their kids' take: usually a "she looks cool," or similar. Because yeah, she does. And I'm honestly jealous of kids of any gender who are going to get to grow up with her as an icon.

All of this is not to say that there isn't legitimate criticism coming from women. Many Doctor Who fans of color (and observers from outside of the fandom) have pointed out that the first steps toward gender parity are usually taken by white women. These viewpoints must be acknowledged, even if you still want to celebrate this milestone.

But what I see in the outright anti-female Doctor response coming from mostly white women is guilt manifested as anger. Over and over again, women in fandom have been told that they should not be taking up space. And so when space is given, they can sometimes fall on the side rallying against it, with an argument that's just a few words off of what Red Pill Reddit is spewing. When Whittaker's first full season starts, perhaps these women will come around, through the sheer power of representation. They deserve to be the Head Time Lord In Charge (HTLIC), even if they're not aware of it.