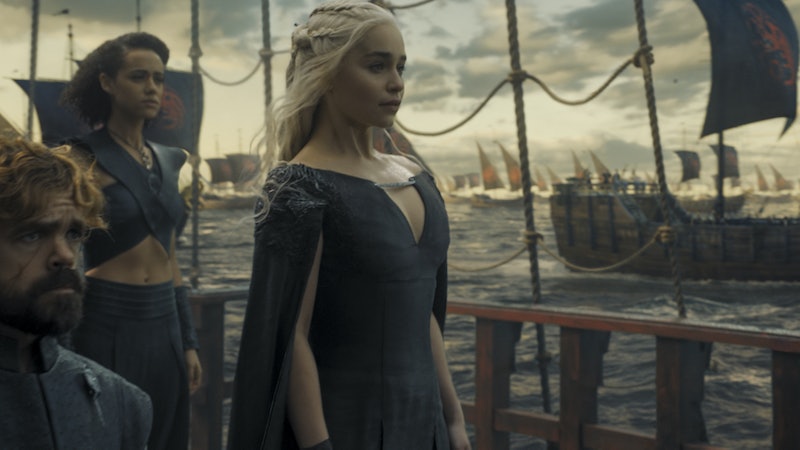 If you've seen the Game of Thrones TV show, or read the Song of Ice and Fire books, or stumbled across a subreddit of theories about the true identity of Ser Pounce, then you've probably heard the term "Azor Ahai" before. Perhaps you've filed this away as one of the many, many made up fantasy words that you are resolved to simply never learn (I, for one, refuse to differentiate between the nazgul and the dementors in any meaningful way). Or perhaps you're a diehard fan who has engaged in many a spirited debate over whether Azor Ahai will turn out to be Dany, Jon, Stannis, Tyrion, Ghost, fake Aegon, or some horrible hybrid of all of the above.

Either way, the question stands: who is Azor Ahai, and where did George R.R. Martin get the idea for a mystical savior with a flaming sword of light?

Well, first of all, our buddy Azor goes by a few different names on the continents of Westeros and Essos. He's Hyrkoon the Hero, Eldric Shadowchaser, Yin Tar, Neferion, and the Prince or Princess that was promised. He (or she) is a hero who saved the world from all-consuming darkness many years ago, and he is prophesied to one day rise again.

In the mythology of Essos (fantasy Eurasia), Azor Ahai was a man who lived long ago, and who was chosen to fight against the encroaching forces of darkness. He decided to make a big sword for darkness-fighting, and so he worked for 30 days and 30 nights, only to have the big cool sword snap when he tempered it in water. He tried again, only this time he worked 50 days and 50 nights, and tempered the sword in a lion's heart (classic). The sword shattered all the same.

So finally Azor Ahai did the logical thing, and labored for a hundred days and a hundred nights before driving the sword through the heart of his wife, Nissa Nissa. This time the sword combined with her soul to create an ultra powerful and glow-in-the-dark blade called Lightbringer. With his magical flaming sword-wife, Azor Ahai was able to beat back the demons of night (or maybe the White Walkers?) and bring the dawn once more.

Westeros has a very similar, vaguer tale about the Last Hero, who beat back the Others and ended the generation-long winter of the Long Night.

Here's the clincher, though: Azor Ahai is prophesied to return one day and save the world all over again. Melisandre and her fellow Red Priestesses in the sexy Handmaid's Tale costumes are especially anxious to see a new Azor Ahai rise up and defeat the creepy snow zombies and whatnot. According to their religion, the bright, burning god R'hllor needs a new champion to defeat the dark, cold Great Other in their eternal struggle of good vs. evil. Mel claims that there will be a few surefire signs of this shiny new champion:

"There will come a day after a long summer when the stars bleed and the cold breath of darkness falls heavy on the world. In this dread hour a warrior shall draw from the fire a burning sword. And that sword shall be Lightbringer, the Red Sword of Heroes, and he who clasps it shall be Azor Ahai come again, and the darkness shall flee before him.

When the red star bleeds and the darkness gathers, Azor Ahai shall be born again amidst smoke and salt to wake dragons out of stone."

It's clear by now, however, that Maester Martin just loves to take real history, crank it up to eleven, add dragons, and throw it back into his fantasy plot. So was there ever a real Azor Ahai?

Well that's... debatable. But his mythology borrows a heck of a lot from old school Zoroastrianism.

Zoroastrianism is one of the world's oldest active religions, dating back to ancient Iran. It actually predates Judaism, Christianity, and Islam on concepts like a single god, Heaven and Hell, Judgment Day, Satan, and the idea of a cosmic war between good and evil. Zarathustra was the first prophet of the religion (hence the name), and his teachings were massively influential on basically every single major religion that's still around today—not to mention every piece of pop culture that deals with battles between good and evil, light and dark, Jedi and Sith, fire and ice. The god of Zoroastrianism is even called Ahura Mazda, which is suspiciously close to Azor Ahai.

Fire is also especially significant in Zoroastrianism, as most prayer takes place in the presence of some sort of fire or light source. You can see how Martin took that idea and just kind of... ran with it. However, real life Zoroastrianism regards both water and fire as agents of ritual purity, and modern Zoroastrians are not remotely interested in burning people at the stake or fighting zombies in the snow.

Zoroastrianism does include a messiah prophecy, however, and here's where Martin definitely picked up a few ideas: the world will one day fall into winter, and evil will darken the sun and the moon. That's when a savior, Saoshyant, will be born to a virgin, raise the dead, wield a magical weapon, lead everybody through a river of molten metal (the righteous will not burn), and soundly defeat evil in a final battle, once and for all. All humans will then become immortal, and everyone will be purged of all wrongdoing.

It's fitting that Martin is pulling from the original battle between good and evil for a fantasy series, since high fantasy so often hinges on a motif of "light vs dark." But Martin has also made it abundantly clear that he's not too interested in a straight-forward chosen one narrative. Azor Ahai may be heavily influenced by Zoroastrian belief, but he's already proven himself to be a far darker figure than the righteous Saoshyant. I mean, this is the guy who murdered his wife to get a cool sword. And this is the author who never goes for a clean cut happy ending.

When — or if — Azor Ahai ever returns, I think we're in for a far messier judgment day.

More like this
16 Novels That Paint A Realistic Portrait Of Abortion
By K.W. Colyard
At 14, Jenny Han Wrote Rom-Coms About Her Friends & Fan Mail To Leo DiCaprio
By Alyssa Lapid
Aesop's Queer Library Is Open
By Tomi Otekunrin
Emilia Clarke Shares More Details About The New 'Game Of Thrones' Series
By Maxine Harrison
Get Even More From Bustle — Sign Up For The Newsletter