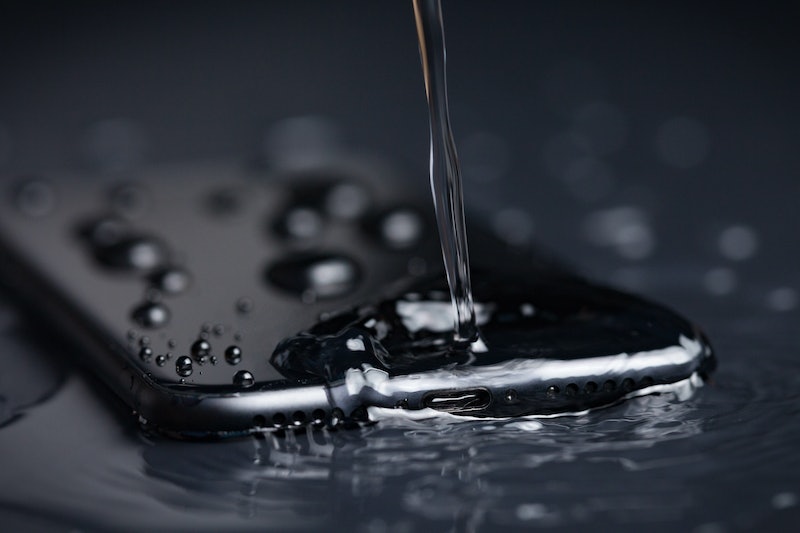 The iPhone 11 series is here and, starting Sept. 13, those who want to get their hands on Apple's latest technology can start pre-ordering. The company's newest devices may be appealing for lots of reasons, including improved camera functionality and the fact that all three iPhone 11 models are water resistant. If you're especially drawn to the water resistance features of the new iPhone models, it might be helpful to take a closer look at what water resistance actually means — and how much water you can really get on your new phone.

According to Apple's technical specifications, the iPhone 11, iPhone 11 Pro, and iPhone 11 Pro Max all have a water resistance rating of IP68. Gadget Hacks, a website that reports extensively on smartphone features, explains that you can break down the ranking into three parts. "IP" stands for "International Protection Marking," which simply means that the ranking is an international standard used to assess how much a device can protect itself from dust and water. The "6" in the ranking refers to the phone's dust protection rating (a 6 means total dust protection), while the "8" ranks the phone's water resistance, Gadget Hacks said.

An "8" water resistance rating means that your phone can be underwater (at a depth of at least one meter or around 3.3 feet) for up to 30 minutes without being damaged. However, as Gadget Hacks explained, this is simply the minimum requirement for an 8 rating.

Of course, in addition to being resistant to damage if they're submerged in water — whether it's an accidental drop in a toilet bowl or swimming pool — the phones are resistant to damage from spills as well, Apple says. The company indicated in a Newsroom release that their new devices are "protected against accidental spills from common liquids such as coffee and soda."

However, the company also noted that it's important to remember that "splash, water and dust resistance are not permanent conditions" and that "resistance might decrease as a result of normal wear." Apple says that means you should always make sure to refer to your phone's user manual for guidance on how to clean and dry the device if it's exposed to liquid.

Finally, it's also crucial to remember that, according to Apple's Newsroom release, liquid damage isn't covered by the company's warranty. So, even though your new iPhone 11 may be very resistant to water damage, you'll still want to be careful. After all, "water resistant" is not the same as "waterproof," so there's a limit to how much water your phone can handle and how long it can handle it for.