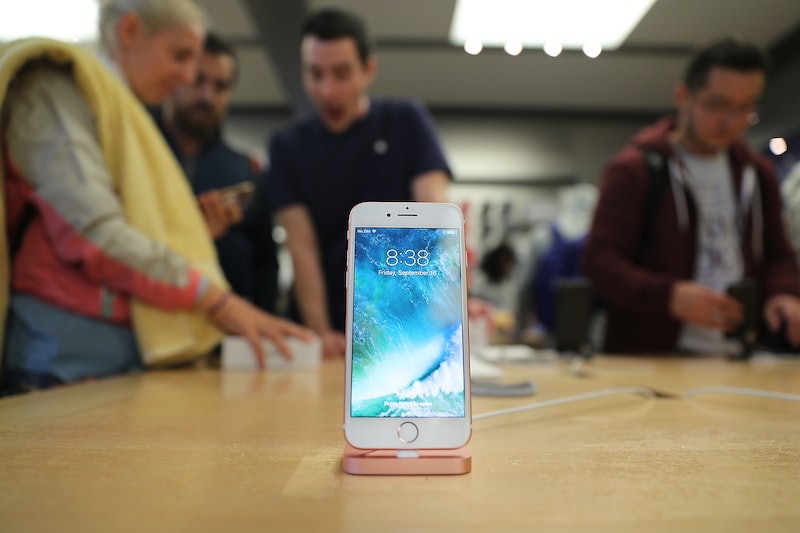 To no one's surprise, the internet swirls with rumors whenever a new Apple product is set to launch. And the latest one suggests the iPhone 8 will charge wirelessly and be waterproof. Bustle has reached out to Apple for comments and will update accordingly.

According to Nikkei Asian Review, a global publication focused on Asia, Taiwanese iPhone assembler Wistron claimed on Wednesday that the new iPhones would incorporate the much-desired features. Robert Hwang, Wistron's CEO, said that the supposed waterproofing and wireless charging require some different testing, but are set for the upcoming phones.

Neither of these come as a huge surprise: Rumors about wireless charging were floating around at least by October 2016, and assumably, the iPhone 8 "becoming waterproof" means becoming "more" waterproof (the iPhone 7 and 7 Plus can already be submerged in water for 30 minutes).

Hwang also said that he expected Wistron to ship more iPhones in 2017 than in 2016, but was not more specific about what he meant. It's possible that he means Apple's announcements will bump the sale of the older models. Or perhaps he's implying that the iPhone 8's release will be better than the 7's. This could mean that Apple has even more exciting plans for eager fans.

As it is, Apple is already planning big things for 2017, which marks the iPhone's 10th anniversary. Some rumors say there will be three iPhones launched in the fall: an iPhone 7S, 7S Plus, and 8. Apple may also allegedly be releasing three sizes for the iPhone 8, which include a new and previously not-on-offer 5-inch iPhone — the iPhone SE is 4 inches — in addition to the 4.7 inch (iPhone 7, 6S) and 5.5 inch (iPhone 7 Plus, 6S Plus) models. The iPhone 8 could also include an almost all-glass design.

Already, the internet is filling up with thoughts on the iPhone announcements. Just the rumored stats on the phone are impressive: an edge-to-edge curved screen; 512 pixels per inch; 3D cameras; a 40 percent increase in battery life; and the TouchID function integrated on its screen. This means that Apple could be removing the home button and integrating that functionality onto the screen itself.

The capabilities of the new iPhone could be momentous. The presence of 3D sensors allows for augmented reality (AR), which Apple CEO Tim Cook is apparently really excited about. In an interview with Bloomberg Businessweek, Cook said Apple is in talks with IKEA about incorporating 3D images of furniture, which would revolutionize how people shop — for furniture, at least. He's not teasing, either; AR is already confirmed for iOS 11.

The news that the iPhone 8 will be wireless is no less than Apple enthusiasts would expect. According to Gadgets360, it's unclear whether Apple will go with the industry-standard wireless charging or with long-range charging, the ability to charge something wirelessly from a distance. Apparently, also according to Gadgets360, a new patent hints that Apple is looking to possibly create charging via Wi-Fi.

While some worry that the new technology will cause a delay in the iPhone 8's release, Apple doesn't think so. As of now, the tech giant says the newest iPhone will come in mid-September, as it usually does — until then, iPhone users will have to still carry around their chargers.

More like this
Using Your Pet’s Name As A Password? Here’s Why You Might Want To Change It
By Cristina Sanza
The 10 Best Waterproof Watches For Swimming
By Lauren Moison
The 8 Best Polaroid Cameras For Weddings
By Megan Gray
What Is “Night Luxe?” Breaking Down TikTok’s New Aesthetic
By Courtney Young
Get Even More From Bustle — Sign Up For The Newsletter