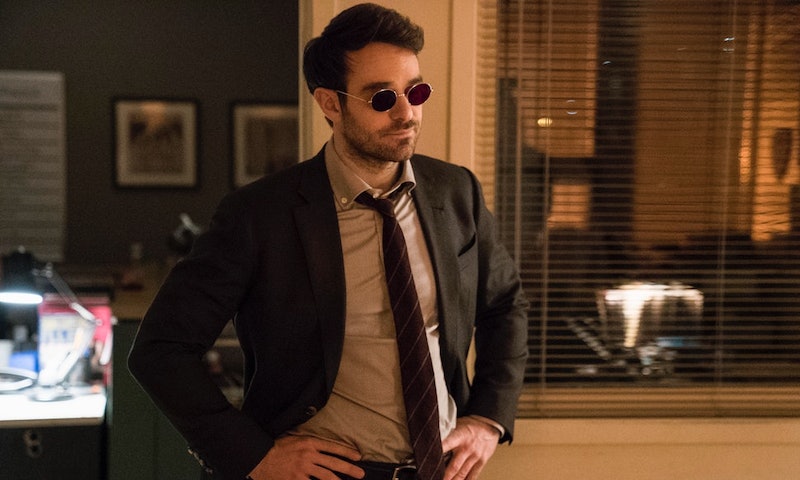 In Iron Fist Season 2 Danny Rand is trying to do right by Matt Murdock, but the Daredevil Season 3 post-credits teaser reveals that he'll be back before long. While Marvel movie fans know that you always stay through the credits , the Netflix shows don't always do this — so it's a nice surprise to see a hint of what's to come when Daredevil returns.

Where is Matt Murdock in the new footage? In a confession booth, of course. The street-level hero, who was presumed dead at the end of The Defenders but revealed to be alive in a teaser at the end of that series, is nothing if not a devout Catholic. He's wearing his all-black suit, without additional enhancements, and holding something that could be as innocuous as a rosary, but may be something else. He also appears to be a little bloodied up. It's not clear who Matt is talking to, or how long he has been back on the vigilante beat, but it's clear that his dance with death has left him a little different.

"I once believed that justice could be found in a court of law and in the light of day," he grumbles in the teaser. "But I was fooling myself. Darkness only responds to darkness. And the truth is, I'd rather die as the Devil than live as Matt Murdock."

Oooooh boy. Somebody needs a juice box. Why so serious, Murdock — sorry — Daredevil? Are you feeling a little self-loathing? Have the Sunday scaries got you down? Not even Danny Rand is brooding this hard at the end of his season, and Jessica Jones is doing relatively OK these days. Between Matt's moodiness and Luke Cage's power corrupting him slowly, these vigilantes could use a pick me up, or at least a group retreat the next time they meet.

At the end of The Defenders, Matt sacrificed himself as a building collapsed on top of him, and woke up in a convent. He was dressed in white, from bandages to sweatpants. Someone called for a "Maggie," who is likely his previously unseen mother Margaret Murdock. However, clearly Matthew isn't back on his feet without a little drama.

Does this teaser further confirm this adaptation choice? "Born Again" is a dark turn for Daredevil, and this teaser seems to indicate that Matt is on a dark path, for sure. He becomes paranoid and struggles with identity, as he does in this teaser. After "dying" in the Defenders he is literally born again. However, what this teaser shows most of all is that Matt Murdock is back and not too happy about it. When Daredevil returns for Season 3, let's hope he ultimately finds the light.

This article was originally published on Sep. 7, 2018