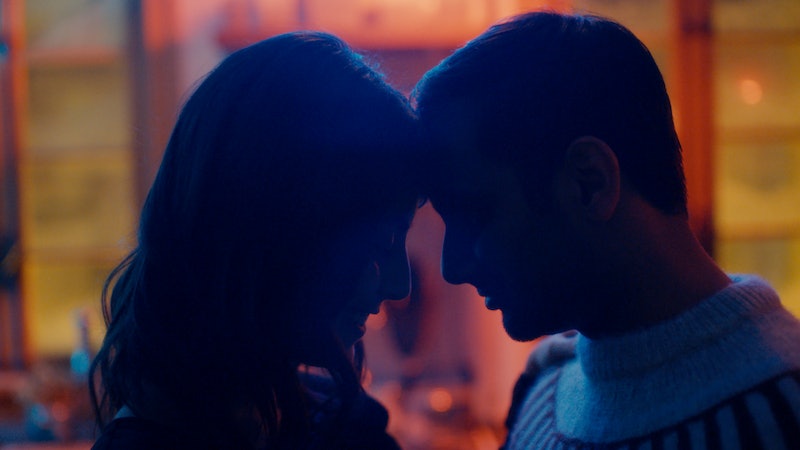 SPOILERS AHEAD FOR MASTER OF NONE SEASON 2. Francesca and Dev's relationship over the course of Season 2 of Master Of None is complicated at best and tragic at worst. The two keep in contact after some getting to know each other during Dev's pasta studies in Italy, and a visit to New York brings Dev's underlying feelings for Francesca to the surface. The hourlong episode "Amarsi Un Po" shows Dev and Francesca reuniting while she's visiting New York with her fiancé, and the two share a series of special moments. Their idealic, fairytale romance even gets a soundtrack when Dev and Francesca dance to an Italian song in Master of None to keep entertained during a blizzard.

While most love stories may include the characters dancing to a thematically appropriate ballad while mourning over their forbidden love — Master Of None's realistic approach goes instead for a more appropriate soundtrack for two friends who can't admit they are in love by scoring the moment with a goofy instructional dance piece that keeps them warm while having the kind of silly fun that people have when they're falling in love. The song itself is "Guarda Come Dondolo" by Edoardo Vianello, and it's a perfect track for any fun, relaxed occasion, which makes it ironic that Dev and Francesca dance to it during the most tense, anxious part of their budding romance.

Anyone watching the series who doesn't understand Italian may be surprised that the songs' lyrics are exclusively dancing instructions, and instructions that neither Dev nor Francesca seem to follow, at that. Imagine how frustrating would it be to be watching a dance scene during television show where "Watch Me (Whip/ Nae Nae)" is playing and nobody dancing is either whipping or nae naeing. That's essentially what is going on during Dev and Francesca's dance sequence.

with the legs at an angle

legs to dance the twist angle.

It all sounds pretty goofy when taken from Italian to English, but it's no sillier than "The Cupid Shuffle," "The Cha Cha Slide," or and other instruction-based dance tune. While "Guarda Come Dondolo" may be a shallow song, the moment where Francesca and Dev have their late-night boogie is a fairly shallow moment. The characters are attempting to have an innocent, non-complicated relationship while suppressing feelings and also balancing Francesca having a fiancé.

"Guarda Come Dondolo" is a simple song played during a very complicated moment in a very complicated relationship. But who hasn't found themselves in the midst of a relationship, whether a budding new one or one that's been through months or years of good and bad times, and listened to a simple song and imagined that love, or life, could be that simple? Dev certainly wishes for a cut-and-dry solution where Francesca leaves her fiancé, leaves her Italian family and village behind, and moves with him to New York City to be together forever. Unfortunately, life is never quite that simple, and the best thing to do instead of worry is to twist, rock, and dance your anxieties away.