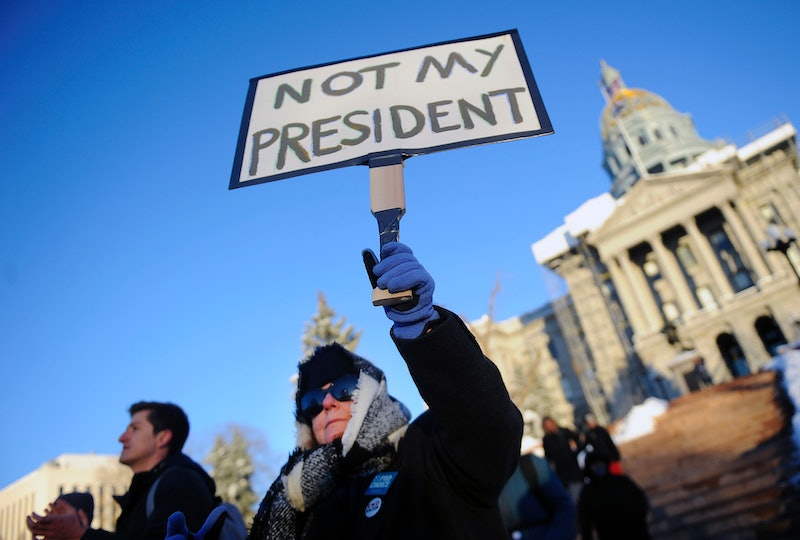 The upcoming Women's March in Washington may be one of the biggest protest events in United States history. For many thousands of women and men who are just coming of age in this new era of political activism, there isn't much guidance on how to protest, because for so long, it wasn't as urgently needed as it is today. Luckily, there are some great people working to keep everyone safe at the March on Jan. 21. The list of items banned from the Women's March was made with safety in mind, and even if it might be a little inconveniencing, it's a necessity.

According to the Detroit Free Press, the Secret Service, Washington Metropolitan Police Department, U.S. Capital Police, and other security agencies are collaborating in the effort to keep the march safe. Extra precautions must be taken for such a high-profile and controversial event like this, so the authorities compiled the list of banned items below to make policing the march a more manageable job.

Some of this stuff would be really fun/useful to have at the event, but ultimately, this list was cultivated for everyone's safety. With protestors, counter-protestors, and people probably just looking to stir up some trouble, tensions are bound to run high, and keeping these items out of the march area will help prevent any unintended violence. Even selfie sticks can become dangerous with enough Trump-induced anger behind them. If you want to have the most productive time possible on Saturday, be sure to leave all this stuff at home.

This same list goes for all inaugural events, so if you're planning to attend more than just the March, Also, be careful about any signs you intend to bring to any events. Signs are not allowed to mounted be on sticks or poles, nor are they allowed larger than three feet wide, 20 feet long, or 1/4 inch thick. This seems a little more picky than useful, but protesting about the size of signs allowed won't be a useful way to take your stand on Saturday. Following the rules set in place for the March is the best way to ensure everyone has a hassle-free, safe, and fun time together, so make sure to pack only what's allowed and what you need.

More like this
'The Capture' Is Finally Back – & S2 Looks Tense AF
By Sophie McEvoy and El Hunt
The Lionesses Are Calling For Equal Access To Football In Schools
By Sophie McEvoy
The Spice Girls & Adele Lead Girl Power Celebrations For Lionesses’ Euros Win
By Sophie McEvoy
42 Black Owned Fashion & Beauty Brands To Support Today & Always
By Mekita Rivas, Shea Simmons, Kui Mwai and Dominique Norman
Get Even More From Bustle — Sign Up For The Newsletter