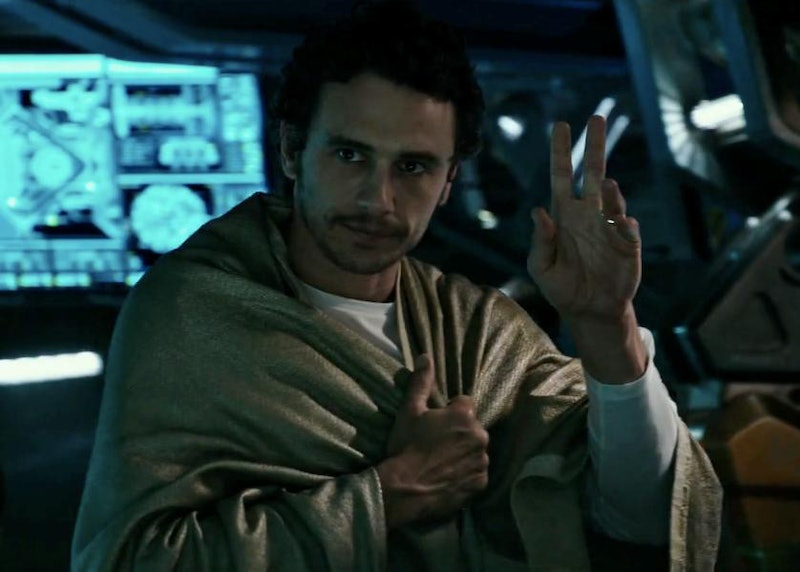 If you've seen some of the promotional materials for Alien: Covenant, you may have gotten the impression that James Franco is starring in the movie. After all, he is arguably the most recognizable actor in the cast, and it seems likely that his star power could help sell tickets. And yet, James Franco has a cameo in Alien: Covenant — he's not a main character, but a guy who makes a very brief appearance in the movie early on in its runtime.

While it's true that Franco is barely (and seemingly randomly) in the film, his role is actually somewhat important. Small spoilers ahead! The film's plot revolves around the Covenant expedition, which seeks to colonize an uninhabited planet using a number of couples on board. Franco portrays Jacob Branson in the film, the captain of the Covenant, who is also the husband of the film's main character, Daniels (Katherine Waterston). But even though he's the captain of the ship and set up as a main character, Branson dies very early on in the film. After heading to his cryosleep pod early while not feeling well, the ship is hit by an energy surge, and Branson is burned alive while still in his sleep chamber.

He later shows up in a couple videos that Daniels watches as she reminisces about her deceased husband, but that's it. That's all James Franco does in Alien: Covenant. His absence leaves Daniels without a partner for the remainder of the film, unlike the rest of the crew (at least at first), and it's her will to survive and independent streak that fuels much of the film's action. But why would a big star like Franco take on such a small role in the film?

Probably because he just really likes the franchise and always has. "I remember when I was a kid watching Alien for the first time and that was huge," the actor told Hey U Guys. "It's such a good movie. It's so tight and full of tension ... it's great to be a part of it." He also spoke about how much he enjoyed working with legendary director Ridley Scott, whom he referred to as "the best" in an interview with Flicks and the City.

Franco is an actor who almost never does what's expected of him. And although he isn't in Alien: Covenant much, it seems he was more than happy to lend his talents to the franchise in any way he could.